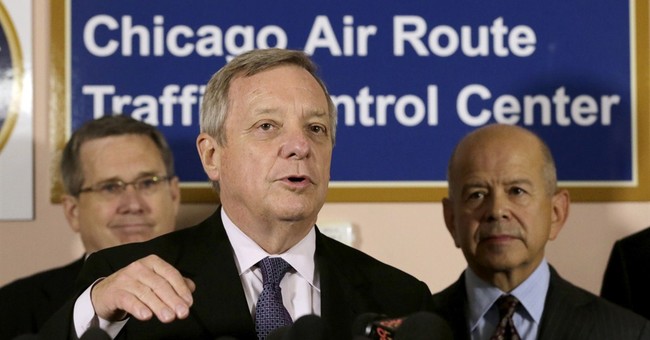 In criticizing Republicans for holding up the nomination of Loretta Lynch, Durbin said, "Loretta Lynch, the first African-American woman nominated to be attorney general, is asked to sit in the back of the bus when it comes to the Senate calendar." Race card alert!

Does Durbin not recall voting against Miguel Estrada and even participating in a filibuster against the man who would have been the first Hispanic on the U.S. Court of Appeals for the D.C. Circuit?

From 1990 until 1992, Estrada served as assistant U.S. attorney and deputy chief of the Appellate Section, U.S. Attorney's Office, Southern District of New York. In 1992, he joined the United States Department of Justice as an assistant to the solicitor general for the George H. W. Bush administration, where he served with now-Chief Justice John G. Roberts. He has argued 22 cases before the United States Supreme Court.

But Estrada, after two years of waiting, finally withdrew his nomination for the Court of Appeals.

Alberto Gonzales was born to a Catholic family in San Antonio, Texas, and raised in Houston. Of Mexican descent, he was one of eight children born to his stay-at-home mother and construction-worker father, who met each other when both were migrant workers. Gonzales and his family of 10 lived in a two-bedroom house with no running hot water and -- until Gonzales was in high school -- no phone, either.

A high school honor student, Gonzales enlisted and served in the U.S. Air Force after graduation. He received an appointment to the U.S. Air Force Academy, and later transferred to Rice University in Houston, where he earned a bachelor's degree with honors in political science in 1979. He got his law degree from Harvard in 1982, and began practicing law at a prestigious firm in Houston.

Does Durbin not recall voting against Janice Rogers Brown, the second black female on the U.S. Court of Appeals for the D.C. Circuit?

Born in Greenville, Alabama, Brown, a sharecropper's daughter, attended majority black schools as a child. Her family refused to enter businesses that segregated blacks. She earned her B.A. from California State University Sacramento in 1974 and her law degree from the UCLA School of Law in 1977.

Finally, does Durbin not recall voting against the confirmation of Condoleezza Rice, the first black female secretary of state?

Rice was born in Birmingham, Alabama, the only child of a schoolteacher/church organist and a football coach/Presbyterian minister. She grew up in the then-deeply segregated Jim Crow South. Rice knew two of the four little black girls killed while attending Sunday school during the tragic 1963 firebombing at Birmingham's Sixteenth Street Baptist Church.

Rice began piano lessons at the age of three. She studied French and Spanish, and became a competitive figure skater. Attending segregated schools, Rice excelled, skipping the first and seventh grades. She attended an integrated public school for the first time in the 10th grade, when her family moved to Denver, Colorado. She finished her last year of high school and her first year at the University of Denver at the same time, at the age of 15.

To lefties like Durbin, a metamorphosis occurs to conservative women and people of color. Gloria Steinem, for example, once called Republican Sen. Kay Bailey Hutchison a "female impersonator." Conservative blacks cease being black. They're sellouts. Conservative Latinos are no longer Latino. They're "Tio Tacos." They are, you see, conservatives, a form of political subspecies. They are ideological doormats that Democrats can enthusiastically attack, and then -- with a straight face -- call Republicans "racist."