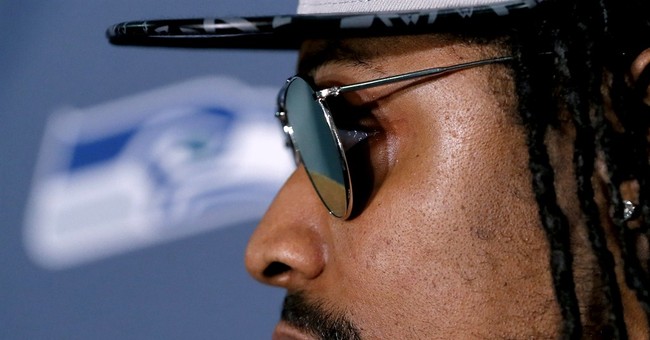 "What do you think you missed not having a dad around?"

Marshawn Lynch, the grumpy, often-fined National Football League star for the defending Super Bowl champion Seattle Seahawks, was asked that question. Lynch, raised on the mean streets of Oakland, California, by a single mother, said: "Nothing. My mama played both parts."

When asked, however, why he finds it difficult to "trust" people, Lynch tells a story about his father: "I think it started earlier, when Mom would (take me over to my dad's) house. And when I get there, my dad like, 'Oh, OK, I be right back,' and then you don't see this guy for like, two days or something. And then after a while you, like, sh--, you build up numb feelings to that. So you start to expect the worst out of people."

Didn't he just tell us that he missed "nothing"?

Maurice Clarett, another inner-city football player who starred at Ohio State, was featured in an ESPN documentary film. Like Lynch, Clarett was raised without a father. "My father," explained Clarett, "wasn't part of my childhood. And when you come from a broken family you carry those problems; you carry that baggage wherever you go."

Clarett's mom added: "I provided all I could provide for him as a mother. There's just things a child pulls from a man. (Ohio State) coach (Jim) Tressel did represent a father figure to Maurice. They had conversations that a father and son should have. ... Tressel tried to provide some of the values that fathers instill. But Tressel can never be his father."

In Clarett's freshman year under coach Tressel, he played a key role in the Buckeye's winning the 2002 BCS National Championship. But Clarett's college career ended just months later, over accusations of academic misconduct and of filing a false police report. This resulted in an NCAA investigation and Clarett's suspension from Ohio State.

Alcohol- and drug-fueled days followed his Ohio State departure, and after three years, Clarett was arrested for armed robbery. His then-pregnant girlfriend feared that Clarett's unborn daughter would "grow up just like I did -- with a father in prison."

Before his armed robbery trial began, Clarett was again arrested and ultimately convicted for illegal possession of loaded firearms and resisting arrest. Sentenced to seven-and-a-half years, he served three years and 11 months.

But instead of emerging from prison angry, Clarett says he "educated himself." His first lesson? Accepting responsibility for the choices he made that landed him in prison.

Some of his prison reflections:

"One thing that I've come to realize is I am my only enemy. I am the sole ruler of this journey."

"I hate to see my family suffer over my nonsense. They don't deserve it. My actions incarcerated them also."

"Quit searching for love, peace, and happiness outside of yourself. I once did that. It doesn't work."

"When I lockdown tonight I will begin to separate my emotions from my logic. That will bring clarity and sound judgment."

After his release from prison, Clarett's father died. He thought he was not going to have feelings. But he did. His father's death hurt him deeply, largely because, according to Clarett, he had a chance "to make it right with the man" -- but chose not to do it.

Marshawn Lynch and Maurice Clarett are football "success" stories, backed by loving, self-sacrificing mothers. But for every talented inner-city athlete who "made it," there are many more with as much or more talent, with involved mothers, too -- who never do. It takes more than talent -- it takes guidance to instill the necessary discipline to apply those skills.

My own father did not know his father. Raised in the Jim Crow South during the Great Depression, my father, like Maurice Clarett, vowed to be a better father than his non-existent one. In my latest book, "Dear Father Dear Son," I write about his tough life. After Pearl Harbor, he joined the Marines, where he became a staff sergeant in charge of food services. But after the war, when he returned to the South, he could not get work as a cook because restaurants told him, "We don't hire n--gers."

After working for years as a janitor, my dad opened up a restaurant, which he ran until his 80s. In "Dear Father," I write about my father and our 10-year estrangement when we didn't talk to each other. When at last we sat down for a lengthy -- and long-overdue -- conversation, I asked him about his father. And for the first time in my life, I saw my father cry.