Sorry About Calling You 'Uncle Tom' 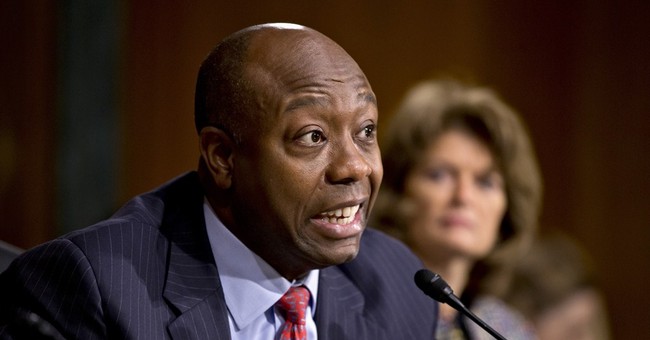 The Rev. William Barber, head of North Carolina's chapter of the left-wing NAACP, recently said this about black, tea-party-supported Republican U.S. Sen. Tim Scott, S.C.: "A ventriloquist can always find a good dummy." Sounds like Barber might have mentored an ex-high school classmate with whom I recently had the following exchange:

Ex-Classmate: "Uncle Tom in its purest form, that's Larry Elder, you hate your own people, need your ass kicked. ... I remember you from Crenshaw High. Your politics are so predictable. Man, you're such a phony. White folks don't accept you like you assume. When I lived in Orange County, you were kind of a joke."

Elder: "Generally, I don't respond to insults, but since you are a fellow Crenshaw Cougar, I'm giving you a little time.

"Funny, I don't remember you. What that says about the impression you made, I'll leave up to you.

"What do I care if 'white folks don't accept me' -- whatever that means? I'm not running for president of 'white folks.' I have friends, relatives and co-workers who manage to tolerate me.

"I'm sure you've done well in life, well enough to take time to tell me how I've mismanaged mine.

"Nor does it hurt my feelings to hear what you've said about me. I look at people like you the way I look at an otherwise friendly dog, taught viciousness by its owner. You've been trained to see disagreement over the kind of issues I discuss as somehow threatening to your well-being.

"That I see the world differently from you warrants the kind of silly put-downs in your post? Really? You say, 'When I lived in OC, you were kind of a joke.' Meaning, exactly what? That when you said my name out loud people fell down in laughter? Meaning, a scientific poll was conducted by field researchers showing that OC residents considered Larry Elder a 'joke'? (For the record, my highest program ratings are in OC.)

"The formula for life -- to me and my parents -- is simple, if hard to implement. Work hard. Don't make excuses. When things go wrong, ask whether I could have done something different, something better.

"Now, you'll write back. Everybody does. And when I don't respond -- because of how I choose to invest my valuable time -- you'll call me another series of juvenile names and tell your friends and relatives that Elder's not responding because you 'won the argument.' Hey, if it makes you feel better, go for it.

"You can always call in to my show, and we can do this for real -- if you have the cashews. Call from 3pm to 6pm, Mondays to Fridays. Tell my screener that we've chatted on Facebook.

"Take care, Bro. Too bad they indoctrinated you and turned you into a sad, simple, sputtering name-caller. Winners don't see a need to put others down to elevate themselves.

"That's a job for victicrats -- those who blame others for their 'plight.' Report to the nearest mirror."

TG: "Larry, I'm white and live in Orange County. And to be honest I read your posts all the time and always watch when you're on TV. I truly didn't realize or even give it a second thought that you were black. Does it matter? I like your views and think you're an intelligent man. Would truly like to see you in politics. Keep up the good work, we need more people like you. Regardless of color."

KV: "Is that why we have 'Larry Elder for President' bumper-stickers on our cars? I would give five years of my life to have Larry even one term as president. May God bless Larry and all who try to make sense to a twisted liberal world."

ML: "That reply rocked, Larry. And surprise, surprise, to your former racist classmate, there are many white people who could care less that you are black. I care that you recognize the Democratic Party is the party of social enslavement and social injustice all hidden underneath their plastic self-righteous smiles and slanderous anti-Republican rants. You, sir, speak for Americans -- not just a race -- and your values are the same as mine. ... You are like a drink of clear, fresh, cool water in this age of media lies and censorship! Thanks for keeping it real!"

LP: "So sick of the black and white thing. Tired of blacks who see what is really happening and speaking out, being reduced to 'Uncle Toms' because they think for themselves. I admire the man or woman who can discern the depth of the crushing politics that is being played out here in America no matter their origin, race or religion."

Several hundred comments later, I still hadn't heard back from my former classmate. I wrote again.

This time he replied. Then something surprising happened.

Classmate: "I apologize, for the name calling, Mr. Elder. I've had cancer. It's left me somewhat bitter. Man, I'm sorry for coming at you like that."