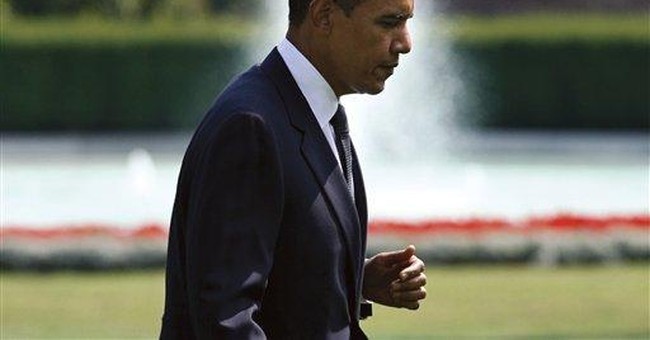 The scenario usually plays out this way.

A white person says something about a nonwhite person -- a statement perceived as racially insensitive, purportedly reinforcing a stereotype, or otherwise considered racist.

"Black leaders" or members of the "civil rights community" pitch a fit and make demands. Off with his head! The offender apologizes, denies that the comment reflects how he "truly feels," agrees to take racial sensitivity courses, grovels and then often ends up losing his job anyway.

Recognizing and accepting that sometimes people say silly, stupid, illogical or disagreeable things won't do. Writing someone off as wrongheaded isn't enough. He or she must pay.

This brings us to popular Fox News host Glenn Beck.

Beck, on the morning show "Fox & Friends," called President Barack Obama a "racist." He further said the President has a "deep-seated hatred for white people or the white culture." In making his case, Beck considered comments made by Obama-nominated Supreme Court Justice Sonia Sotomayor that a "wise Latina woman" would make better decisions than a "white male." Also, there's Obama's 20-year association with a bigoted pastor whom the President once referred to as his "spiritual adviser." And the President suggested the Cambridge police engaged in racial profiling -- despite the lack of evidence.

How this adds up to Obama's being a racist escapes me. Indeed, when Beck made the comment, one of the "Fox & Friends" hosts strongly took issue: "You can't say he doesn't like white people. David Axelrod's white. Rahm Emanuel, his chief of staff, is white. I think 70 percent of the people we see every day are white. Robert Gibbs is white." The host might have added, among other things, "His mother was white. For a time, his white maternal grandparents raised him."

But where are the usual suspects calling for the stockade?

Where was the Rev. Jesse Jackson, who once blamed racism for the Democratic Party's failure to select him as a vice presidential running mate? Where was the Rev. Al Sharpton, who demanded the firing of talk show host Don Imus for making jokes about a black female basketball team? Where was the NAACP (which "deplored" Beck's statement but failed to even request an apology), whose chairman, Julian Bond, once vowed to pursue "the new racists" and whose Philadelphia branch marched on behalf of black quarterback Michael Vick, convicted of operating an illegal dog-fighting ring? Where was the Congressional Black Caucus, many of whose members attributed racism to the government's response following Hurricane Katrina?

President Obama's election proved that racism is no longer a significant force in America. More voted for him because of his race than refused to do so for that reason.

Had the usual race-card/always-offended players targeted Beck, they stood to face a formidable counterattack. Beck's popularity and fan base continue to grow. The Obama-is-a-racist accusation notwithstanding, Beck raises legitimate criticisms of this administration. Demanding and failing to get Beck fired stood to expose these "civil rights" groups and "black leaders" for what they are -- a spent force.

Didn't black New York Gov. David Paterson sound pathetic when he blamed his crashing poll numbers on racism? "Our black media outlets ... are the only ways that we have access," Paterson said, "and even our own reporters from our own community buy the public line, which is, 'We're going to get rid of David Paterson.' ... And the reality is that the next victim on the list ... is President Barack Obama." Even after the President chastised him, Paterson said, "One very successful minority is permissible, but when you see too many success stories, then some people get nervous." What?!

What to do when the primary problems facing the black community -- 70 percent of black children born to unwed mothers, 50 percent inner-city high-school dropout rate, black-on-black crime -- have little to do with racism? Blaming racism absolves people of personal responsibility. And in a country that elected President Obama, it loses its potency.

Martin Luther King Jr. dreamed of the day when we would judge not by color of skin, but by content of character. For the most part, that day has arrived. There is, however, a corollary. One may examine the content of another's character -- or the appropriateness of his policies -- and raise hell about it.