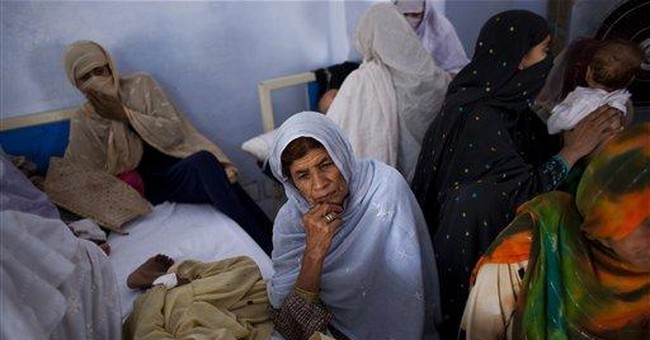 "President Barack Obama says that he can pay for his goal to provide health care insurance for every American without it. Why isn't that good enough for you?"

Elder: Yes, the President says that he can "pay for" his goal of providing health insurance for every American without it. Care to bet on that?

When government proposes a program, the ultimate price tag inevitably exceeds projections. In "Why Government Doesn't Work," libertarian Harry Browne wrote: "Most older people now find it harder to get adequate medical service. Naturally, the government points to the higher costs and shortages as proof that the elderly would be lost without Medicare -- and that government should be even more deeply involved. When Medicare was set up in 1965, the politicians projected its cost in 1990 to be $3 billion -- which is equivalent to $12 billion when adjusted for inflation to 1990 dollars. The actual cost in 1990 was $98 billion -- eight times as much."

Congress, from the outset, placed Medicare on autopilot because of a growing, aging and longer-living elderly population. Congress, from time to time, attempts to "rein in" increased costs by imposing fixed reimbursement schedules. This simply creates an incentive on the part of doctors and hospitals to schedule a lot of unnecessary tests or to "pingpong" patients from specialist to specialist in order to evade the artificial limits. This also forces doctors and hospitals to charge more from private carriers to offset the low reimbursement rates provided by Medicare.

Everybody gets hurt -- the elderly because the medical profession becomes less efficient, innovative and cost-effective, and the non-elderly because practitioners charge them more to offset the lower reimbursement rates provided by the government.

"We need to require all employers to provide health insurance."

Elder: We end up paying more, not less. During World War II, Congress imposed wage freezes. Business people who wished to attract employees had little recourse but to offer non-cash benefits. The government, recognizing business people's "plight," allowed business to deduct the cost of health insurance as a business expense. This put, for the first time, something between doctor and patient, distorting the traditional fee-for-service system, used so successfully up until then. It also created the incentive to get your medical care through your employer rather than pay for it directly.

I once lived in a large apartment complex that included utilities paid by the landlord. During hot summer months or cold winter months in my previous apartment -- where I paid for utilities -- I turned the thermostat off when I left the apartment and put on the heat or air when I returned. Once I moved into the "utilities-included" apartment, I left my heat and air on all day, thus ensuring a perfect climate when I came home -- sometimes as long as 12 hours later.

Now, I knew that somehow I paid, but the cost would be distributed over all the tenants in the building. So the conscientious tenant who cut off his or her air subsidized my carefree use of utilities. Eventually, we all pay, but the effect becomes gradual and diffused over a number of people who have little incentive to "conserve."

This applies to employer-provided insurance. Employees have less incentive to refrain from seeing doctors for minor reasons, less incentive to watch and manage their own health, and no incentive to cost compare among competing insurers and health care providers.

"I'm a supporter of free markets and competition, but that doesn't apply to medicine. Improved technology and research costs just drive the price of medicine up."

Elder: New technology -- in most any field -- initially costs a lot. Consider the cost years ago of computers and calculators versus what we pay today for equipment and applications far faster, easier and more powerful. Remember the price of calculators 30 years ago? Today they are so cheap some outlets give them away as gifts -- loss leaders to get you into the store.

Government-imposed rationing sacrifices quality and innovation while imposing long wait times. But you cannot control costs without removing the incentive to improve and innovate. How many medical-care breakthroughs occur in Canada? How many new drugs to improve patient outcome come from Canada? Without the profit incentive, you get fewer entrepreneurs and fewer investment dollars because you've diminished the likelihood of reward.

Want efficiency? A friend of mine who serves on the board of a hospital in Ontario recently wrote: "We have actually had to send money back to the government because the surgeries -- scheduled months earlier -- didn't occur because patients went to the U.S. for treatment instead. Funding is specific to some procedures, and if not used, the money is sent back. Right now we are losing the surgery money because we have a bed shortage for folks who can't return home because of the level of care they need, but there are no facilities for them to transfer to. Why, you ask? Government regulations make it next to impossible for private people to make a profit. And so the vicious circle continues."