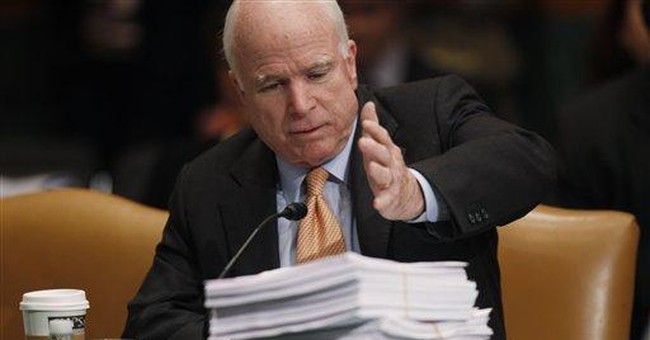 About 45 million Americans lack health care insurance. Or do they?

And the insurance is lousy, right? Not according to a 2006 ABC News/Kaiser Family Foundation/USA Today survey. It found that 89 percent of Americans were satisfied with the quality of their own health care.

Nearly half of the 45 million fall in the category of my 26-year-old nephew. He smokes cigarettes, dates, eats out, goes to movies and, like all young people, lives through his cell phone. With a slight change in priorities, he could afford health insurance, the cost of which at his age and health starts at about $100 a month. Take a look at a Reason Foundation video of interviews with a bunch of non-health-insured 20-somethings.

These Gen Xers copped to dropping money on clothes, booze, nightlife, the latest tech gizmos and other things of interest to them. With a change in priorities, these young folks -- far more representative of those without insurance than the forlorn husband and wife sitting on a porch swing -- could both afford and qualify for health insurance. They simply consider it a low priority.

Millions more can access health care -- through SCHIP (State Children's Health Insurance Program), Medicaid or other government programs. But for whatever reason, 11 million people simply refuse to take advantage of them.

Several million other Americans who want insurance do, indeed, go without it -- for a time. Many are, however, between jobs, and most -- at some point -- will find employment that either offers health insurance or pays enough so that they can buy it. Millions more work at companies that offer health insurance, and for a few dollars out of every paycheck, they could add family members. They choose not to.

What about criminals without insurance? More than 2 million Americans -- with access to health care, by the way -- use jail, prison or penitentiary mailing addresses. And for every one behind bars, how many live among us who survive by theft, drug dealing, prostitution or some similar career path? Taxpayer health insurance for them, too?

So now we're down to the Americans without health insurance on a persistent, long-term basis. This is approximately 10-15 million, a big number to be sure. But does this warrant a government takeover of the entire health care system?

Government (aka taxpayers) already pays half of our health care dollar, with programs such as Medicare, Medicaid, SCHIP and other federal and state plans. The stated goals are accessibility and affordability. Congress passed Medicare in 1965. In the 20 years before the program's inception, the cost of a day in a hospital increased threefold. In the 20 years following Medicare, a day in a hospital increased eightfold -- substantially higher than inflation over that period. Because of cost controls on government plans, providers increased the cost on everybody else.

So here's the question.

Do we allow a complete government takeover of the section of health care it doesn't already run, for 10-15 million or so without health insurance on a persistent basis? Again, 255 million Americans already have it. Many millions more could get it if they wanted to. And 89 percent of Americans are satisfied with the care they now receive.

What to do? Unleash the free market. Allow greater competition among health care providers. Decrease costly regulations that increase the price tag. Enable consumers to purchase insurance plans across state lines. Allow non-government-licensed paraprofessionals and others -- currently prevented by law from offering any medical services -- to provide low-cost care.

What about poor care and negligence? We have laws against force and fraud, as well as a common-law duty of care. That's why God created lawyers. (Just give us "loser pays.")

What about those who cannot afford it? What about those with pre-existing illnesses whose insurance applications carriers turned down? What's wrong with charity -- people helping people? America remains the most generous nation on the face of the earth. We donate more of our time and money than countries like England, Germany and Japan. During the Great Depression, before the New Deal, charitable giving skyrocketed. After the New Deal, charitable giving continued, but not at nearly the same rate. People expected government to address the problem, and taxpayers felt they gave at the office.

We can provide such "universal" coverage at a "low cost" -- through rationing. That means long lines, lower quality and less innovation for services that Americans currently take for granted.

Economists call it T.A.N.S.T.A.A.F.L. There ain't no such thing as a free lunch.