Imagine if 'President McCain' Joked About the Special Olympics 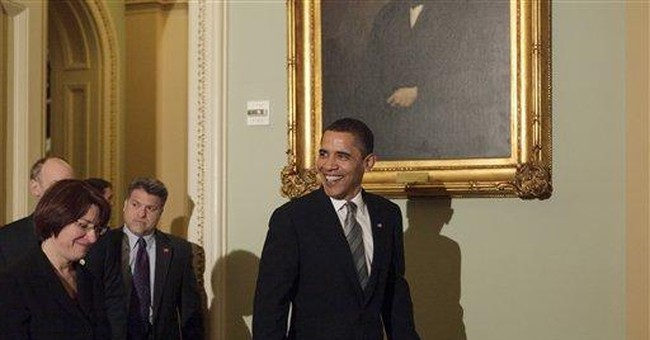 President Barack Obama, in an appearance on "The Tonight Show" with Jay Leno, made a self-deprecating but ill-advised joke, in which he referred to the Special Olympics. He quickly apologized. Crisis averted.

But the real story is the media double standard: Imagine the uproar if a President John McCain made the Special Olympics comment.

For that matter, imagine if a President McCain mistook a White House window for a door; his secretary of Treasury had not paid taxes; he granted two dozen waivers to his no-lobbyists-in-government rule; and he had promised bipartisanship but got only three across-the-aisle votes for his "stimulus" package.

Imagine if President McCain, after promising a "clean break" from his predecessor, retained "extraordinary rendition," the FISA program, the option of wiretapping without warrants, and the option of using "enhanced interrogation techniques"; he promised to close Gitmo, then said it would take as long as a year, but then our European allies refused to take in "detainees" from their own countries; he reneged on/fudged his promise to have all combat troops out of Iraq within "16 months of his presidency"; he adopted for Afghanistan the same counterinsurgency strategy used in Iraq, which, as a candidate, he'd criticized for not "achieving its objectives"; and he used the same "state secrets" argument as did the Bush administration in the same court case, to avoid turning over certain national security documents in an ACLU-brought case on behalf of an alleged torture victim/detainee.

Imagine if -- on the campaign trail -- a future President McCain had declared a nuclear-armed Iran "unacceptable" but agreed to engage in negotiations without preconditions; Iranian President Mahmoud Ahmadinejad told the new President he must apologize for 60 years of anti-Iranian activity; President McCain then reached out to the Iranians in a televised address; and in response, Ayatollah Ali Khamenei -- who holds ultimate authority in Iran -- told him to a) drop animosity and criticism, b) end sanctions, c) unfreeze assets, and d) end "unconditional support" for Israel.

Imagine if President McCain acted "outraged" -- as though he, his secretary of Treasury, and a party leader (Sen. Christopher Dodd, D-Conn.) had not previously known about and approved the controversial AIG bonuses; executives at Freddie and Fannie, failed institutions now taken over by government, were getting bonuses, too; and during this recession, after criticizing taxpayer-funded corporate retreats, President McCain and First Lady Cindy McCain threw taxpayer-funded White House parties nearly every night, hiring entertainers such as Stevie Wonder and the Jonas Brothers.

Imagine if, as sitting president, McCain appeared on "The Tonight Show" with Jay Leno and cracked jokes, while -- as the media would have written -- "millions of Americans have lost their homes and their jobs with millions afraid they're next, yada, blah, etc."; he tripled the projected annual deficit and intended, within a short period, to double the national debt; and he promised to "create or save" an ever-changing number of jobs -- never offering a yardstick to define a "saved job."

Imagine that McCain's vice president made a number of gaffes, including not knowing the "recovery" Web site despite going on national television to promote it and revealing on television -- through his wife -- that he'd had the option of a job as secretary of State or VP -- thus showing the administration's extreme disrespect toward the current secretary of State.

Imagine if, of the 18 important sub-Cabinet positions in the Treasury Department, none were filled; after promising "transparency," McCain wouldn't say where the TARP money had gone and who had gotten it; after receiving bailout money, the largest 20 financial institution recipients actually reduced lending -- the opposite intent of the program; saying that he wasn't a "socialist," McCain defended himself by asserting that "it wasn't on my watch" that we'd bought shares of banks -- but omitted that, as senator, he'd supported and voted for it; and he constantly said he'd "inherited" the deficit despite -- as a senator -- voting for TARP and other programs that had wildly increased it.

Imagine if President McCain ungraciously treated Prime Minister Gordon Brown from the U.K. -- our closest and oldest ally -- and gave him cheap, tacky gifts apparently picked up from the White House gift shop and someplace like Wal-Mart.

Imagine if, despite a reputation for "eloquence," President McCain relied on teleprompters for even the most minor of statements, verbally stumbling and flailing when the teleprompters malfunctioned; he broke protocol and tradition by pre-picking and giving notice to the reporters to be called on in press conferences; and he admonished the out-of-power party by denouncing a popular talk show host and imploring the opposite party to refuse to listen to him.

Imagine if the media kept referring to him as "popular" when his poll numbers were virtually identical to those of George W. Bush at the 50-day mark in their respective presidencies; and his chief of staff, in a newspaper article about his achievements as a House member, said in front of a reporter that the opposition party could "go f--- themselves."

On the other hand, Cleveland State beat Wake Forest.