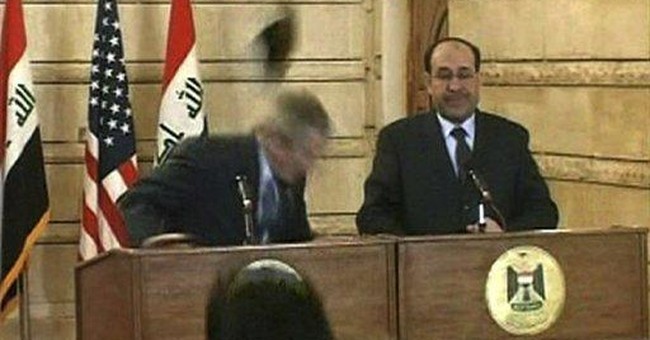 The name: Muntadhar al-Zeidi -- a new hero to many in the Muslim world.

President Bush -- in a surprise, end-of-term visit to Iraq -- held a press conference with Iraqi Prime Minister Nouri al-Maliki. Al-Zeidi, an Iraqi "reporter," shouted, "This is your farewell kiss, you dog," and threw a shoe at Bush. The reporter quickly threw a second. The shoes missed their target only because an agile President Bush managed to duck. And with his typical self-deprecating humor, he later joked, "It was a size 10."

"(Al-Zeidi's) a rather nervous type," al-Zeidi's brother later said, "and above all hates violence and the bombing." Al-Zeidi's employer, Iraqi-owned but Egypt-based Al-Baghdadia television, refused to apologize for its reporter's behavior, calling him a "proud Arab and an open-minded man."

The violence-hating al-Zeidi, according to reports, displays a picture of the "revolutionary" Che Guevara on his wall. Cuban emigre Humberto Fontova, author of "Exposing the Real Che Guevara," credits Guevara with 14,000 executions. Witnesses say this icon for many radicals personally murdered hundreds -- including children and pregnant women. But we digress.

Many Iraqi reporters in the room apologized to the President. One journalist observed, "It was a reporter (emphasis added) who yanked (al-Zeidi) to the ground before Iraqi or American guards could reach him."

Meanwhile, stateside, many in the Bush-hating news media seemed almost giddy -- no doubt considering the shoe throwing a vindication of their own hostility to the war.

Chris Cuomo of ABC's "Good Morning America" said: "Remember when the statue of Saddam Hussein was brought down? When it happened, all the people there started throwing shoes at it. Why? Disrespect. It is a high form of insult."

A CBS "Early Show" reporter said: "Mr. Bush's message of progress was eclipsed in Baghdad by a sign of his unpopularity. The symbolism wouldn't have been lost on Iraqis, for whom shoes can be used to show extreme contempt, as with the footwear beaten against the statue of Saddam Hussein toppled by Marines five years ago."

The Los Angeles Times wrote: "In the few seconds it took Iraqi journalist (Muntadhar al-Zeidi) to wing a pair of shoes at President Bush, the Middle East got its own version of Joe the Plumber. Just as Joe Wurzelbacher's gripes to Barack Obama catapulted him to fame, (al-Zeidi's) burst of rage toward Bush has made him a household name across the Middle East."

Would that be the working-class citizen who politely questioned then-candidate Barack Obama about his spread-the-wealth philosophy? Or was the reference to the lost video of Joe the Plumber hurling a couple of pipe wrenches at Obama's head while calling the now-President-elect a "dog"?

Let us pose a few questions.

Suppose one or both shoes hit their mark. What if President Bush had been struck in the eye and been seriously injured? After all, in the chaos, press secretary Dana Perino was injured when a microphone struck her in the eye. Would some in the media have considered it as comical had the reporter targeted Barack Obama? It is, after all, quite reasonable that the incoming President will be the subject of a greater than usual number of threats.

This raises another question -- how did the Secret Service allow the man to get off not one, but two attacks? "I realized one of the reporters behind me was shouting and, in a way, reloading, with a second shoe," wrote Adam Ashton of California's Modesto Bee. "Off it went, just as fast as the first. I couldn't believe he had time to get a second one off (emphasis added)."

Suppose the Iraqi reporter had thrown his shoes at Saddam Hussein.

During the dictator's 24-year reign, Saddam killed an estimated 300,000 Iraqi citizens. Some place the number at more than a million. This means that, on the low end, over the past six years, a still-in-power Saddam would have killed 75,000 people. Since the March 2003 coalition invasion of Iraq, the Iraq Body Count -- which many consider reliable -- puts the number of violent Iraqi civilian deaths at between 89,000 and 98,000, a number that includes "insurgents" and civilians killed by them. But Iraq now has a fledgling multi-sectarian democratic government, a better economy -- and a free press.

"All over central Iraq," wrote the BBC mere months after Saddam Hussein's fall, "independent radio and television stations are suddenly emerging to fill the void left by the destruction and collapse of the old national broadcaster. Iraqis are enthusiastically embracing the possibilities of a free media after years of heavy censorship. Alongside these do-it-yourself radio and TV stations, dozens of newspapers representing every kind of political viewpoint are suddenly available."

What of the fate of the shoe thrower in today's Iraq? Eyewitness and NBC news producer Ghazi Balkiz put it this way: "(Under Saddam) any insult to the president or the president's guests used to be punished by death." So while al-Zeidi remains in custody, he faces no feet-first visit to the wood chipper.

Who knows? Maybe he'll even get his shoes back.