Is Capitalism on the Ropes? 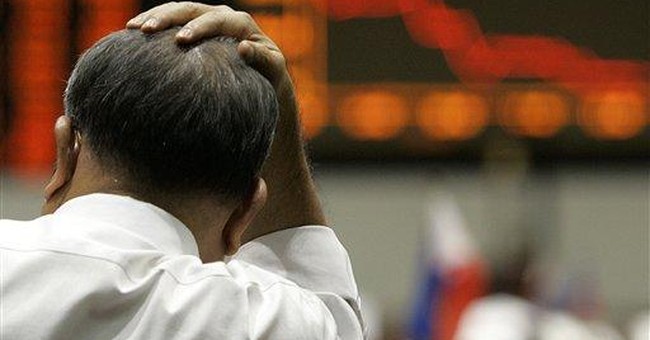 An indictment of greed! A case for more government intervention! Worst financial crisis since the Great Depression! Failure of capitalism! This list includes the "lessons" of the recent turmoil in the financial markets. Nonsense.

Someone please produce the gun held to the temples of borrowers who put little or no money down, took out "teaser" rates, and then pleaded ignorance or victimhood when the lender -- as stipulated in the contract -- jacked up the rate. Lenders and borrowers expected government/taxpayers to somehow, someway, step in and shield them from the consequences of their decisions. This creates "moral hazard" -- behavior based upon the knowledge of protection from the bad consequences of reckless or irresponsible behavior. Decisions entail risk, whether personal or financial ones.

We have it -- lots of it. Ever hear of the Office of Federal Housing Enterprise Oversight (OFHEO)? This agency, which employs 200 people, exists for one thing and one thing only -- to "oversee" Freddie Mac and Fannie Mae, the "government-sponsored entities" that own or guarantee 40 percent of the nation's residential mortgages. Mere months before Freddie and Fannie's collapse and subsequent government takeover, OFHEO issued a report that saw only clean sailing. The Community Reinvestment Act, passed in 1977, mandated that lenders lend to high-risk borrowers -- or else. The government actually held up prudent bank mergers if one or both sides did not sufficiently "lend" to borrowers who, under normal circumstances, failed to qualify. Why is the federal government in the housing business in the first place? We need less government, not more regulation.

We are experiencing "the greatest financial crisis since the Great Depression"!

Even if this were true, we aren't even close to that catastrophic event. At the Great Depression's nadir, 25 percent of adults were unemployed, including nearly 50 percent of urban black adults. Economist David Wheelock, of the Federal Reserve Bank of St. Louis, says that by the dawn of 1934, nearly half the urban homes with mortgages were in default, and 7.3 percent of housing structures had been foreclosed. Today 6.4 percent of mortgages are delinquent, 2.75 percent are in the foreclosure process, and 0.6 percent of all housing units are bank-owned.

But what about since the Great Depression? Take the recession of 1980-81. In 1980, inflation averaged 13.58 percent, unemployment increased from 6.3 to 8.5 percent, and the prime loan rate reached an astonishing 21.5 percent. According to the Mortgage Bankers Association, today's delinquency rate is only a little higher than in 1985. And in 1999, the foreclosure rate set records.

This exposes the failure of capitalism!

What do you say we actually try capitalism, where private actors reap rewards and assume the risk? "Capitalism," says Kenneth Minogue, professor emeritus at the London School of Economics, "is what people do if you leave them alone." People want "hands off" until, that is, they want "hands on." People want homes, many preferring that option even when renting may be more prudent. Many want rent control to shield them from leasing at fair market rates. Democratic presidential candidate Barack Obama promises "world-class" education -- with taxpayers paying for it. And the federal government, in dramatic contradiction with the limited-government intention of the Constitution, involves itself in health care, guaranteeing private-sector retirement accounts, disaster relief, welfare, unemployment compensation benefits, retirement benefits, etc.

The Federal Reserve Bank, in effect, prints money to pay for things that voters demand -- but their taxes cannot cover. The proposed bailout of financial institutions enables the Fed to create hundreds of billions of dollars out of thin air. The cost is greater inflation -- a stealth tax on us all.

In 1930, before Franklin Delano Roosevelt's New Deal, taxpayers paid about 12 percent of their income to all three levels of government -- state, local and federal. Today we pay approximately 40 percent -- even more if you attach a value to unfunded mandates, such as those issued by agencies such as OSHA.

So, yes, our recent financial turmoil does suggest failure -- a failure to truly practice capitalism and a failure to accept and believe in the value, appropriateness and morality of a limited government and maximum personal responsibility.