Emails Show That Indiana Governor Wanted Zinn Out of Classrooms 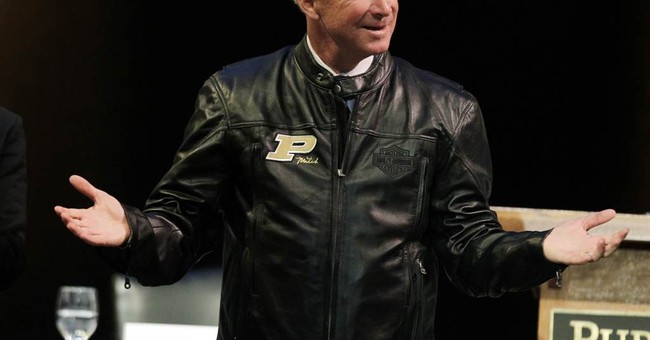 Newly released emails from former Indiana Gov. Mitch Daniels show he was on a mission to remove the late leftist “historian” Howard Zinn’s A People’s History of the United States from Indiana schools.

To put it simply, the text presents American history as the ongoing struggle of an oppressed people who suffered under the oppressive rule of wealthy capitalists. It’s hardly the “land of the free” history that so many adults experienced in their school days.

But condemnation of the book comes from both sides of the political aisle.

A co-editor of the far-left Dissent magazine recently referred to Zinn as “a propagandist” in a multi-page take-down of A People’s History.

“Pointing out what’s wrong with Zinn’s passionate tome is not difficult for anyone with a smattering of knowledge about the American past,” Michael Kazin, the co-editor, wrote.

The American Federation of Teachers issued a similar critique of the book in its magazine.

Gov. Daniels, a conservative Republican who managed to enact many education reforms in his state before leaving office this year, was obviously annoyed that Zinn’s book is so widely used in public schools.

“This terrible anti-American academic has finally passed away,” Daniels wrote in a February 9, 2010, email, according to the Associated Press. “The obits and commentaries mentioned his book A People’s History of the United States is the ‘textbook of choice in high schools and colleges around the country.’"

“It is a truly execrable, anti-factual piece of disinformation that misstates American history on every page. Can someone assure me that it is not in use anywhere in Indiana? If it is, how do we get rid of it before more young people are force-fed a totally false version of our history?”

In another email, the former governor said, “This crap should not be accepted for any credit by the state. No student will be better taught because someone sat through this session,” according to the AP.

Several emails later, a plan was devised to review university courses across the state and attack the common practice of professors using their bully pulpits to preach left wing dogma.

David Shane, a state school board member, predicted the investigation would “force to daylight a lot of excrement.”

“Go for it. Disqualify propaganda and highlight (if there is any) the more useful offerings,” Daniels replied, according to the AP.

The AP claims Daniels’ motive was to “quash political opposition in Indiana schools” with the investigation.

In truth it was an effort to bring some political balance into classrooms. There are too many leftist teachers at the college and K-12 levels that spend countless hours preaching their socialist political views to students, without presenting the other side in any sort of fair comparative manner.

That’s called brainwashing, and Daniels was correct in his effort to stomp it out.