Kurt Schlichter
|
Posted: May 23, 2022 12:01 AM
Share   Tweet
The opinions expressed by columnists are their own and do not necessarily represent the views of Townhall.com. 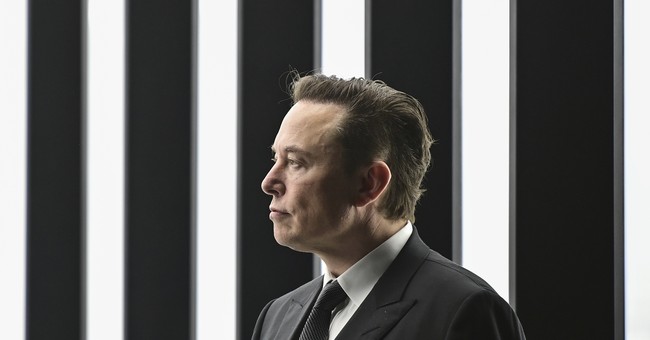 Zillionaire Elon Musk's glorious red-pilling has, predictably, made him Public Enemy Number One of the garbage ruling caste. Back when he was only making electric cars, rocket ships and producing children with bizarre names via singers with bizarre names, he was A-OK in the blue zone. But then he embraced radical notions like free speech and, well, now he's a threat, a treasonous traitor of insurrection. He even said he'd vote Republican. Oh, how the wine women wailed! Instantly, the regime's immune system sprung into action to purge the body politic of the truth pathogen that is Elon Musk.

His Tesla stock coincidentally took a tumble, but there are no coincidences (I own some). Regime whiteboard New York Times devoted the space they did not devote to Robby Mook's devastating testimony regarding Felonia Milhous von Pantsuit – Musk recently got woke to the Russiagate lies and he publicly wondered what else he was being lied to about – to scoops about the apostate. And, of course, the corrupt feds are looking into him since they have plenty of time on their hands not stopping mass killers. Don't be surprised if a SWAT team shows up to arrest him for planning to kidnap the governor of Michigan.

And there's the sex slander. It came out that Musk confidentially settled a lawsuit with some bimbo, and instantly he was Bill Clinton times Gropey Joe plus Harvey Weinstein, except he's no longer liberal, so suddenly liberals care about women. I defend people and others in lawsuits over bogus sex claims, and I can smell a rat. But this is not just a rat – this is a New York City alley full of them. Do I believe that Elon whipped out his SpaceX love rocket to some tart? No. Musk can get chicks the old-fashioned way – by having a lot of money.

Look, the guy dated Amber Heard and survived with his throat unslit and his linens undefiled. This trollop's trumped-up charges are not going to take him down. The fact is that what my mother – the judge – told me after she swore me in as a lawyer in 1994 remains true: "Everyone lies." Allegations in sex lawsuits are as reliable as Jen Psaki, and even bullSchiff claims get settled.

But the truth is not the point. Obedience is. They are terrified of Elon Musk because his money – combined with his iconoclasm – makes him dangerous. The thought that Musk would take over Twitter and allow free speech, thereby utterly undoing their last stranglehold on social media, filled the unelite elite with a cold terror. They know their ideas are garbage; they can only keep power by ensuring they control the marketplace of ideas. And they control it by ensuring it is not a marketplace at all but a Supermax prison where wrongthink is locked away in solitary with a lonely cellmate named Ox.

Elon Musk is threatening to bust their info monopoly, so they will do whatever they can to break him first. And they want you to know he's being broken because if the richest guy in the universe can't withstand them, what hope do we peons have?

Except Musk is not backing down. He's gone to the conservative medicine cabinet and gobbled a handful of red-pills. His Twitter feed is a non-stop chronicle of his ideological makeover. He talks about the truths he's learned since he popped the blue bubble surrounding him, he points out the hypocrisy he sees, and he refuses to back down in the face of the regime's full-court press.

It's kind of inspirational.

Musk has announced that he's taking the next step and forming his own legal Delta Force under his personal command. Nice. There's a lot of damage you can do using the courts. His bat signal to hardcore ambulance chasers focused on lawyers who win at trial, and trials are important, but winning at trial is not optimal. That's tactical thinking; strategic thinking focuses on results, and trials are but one way to get the result you want. If you are bringing a suit, trial may be the only way to get what you want – money. If you are defending one, you want to win without trial. Why? Because in a trial, you can lose. You can't lose a case bringing motions to dismiss or for summary judgment; you can only win.

In any case, this is not a column on litigation theory but on how a rich guy is owning the libs. And owning them, he is. He has gone from green demigod to reactionary demon in just a couple of months, all because he took seriously the principles the progs posed with. Hell hath no fury like a lib disrespected, and Musk's insult is really the basis of this backlash. Musk is publicly unimpressed by the left and the mediocrities who make it up. He sees they are unaccomplished. He sees they are liars. And he sees they are stupid. In his world, you have to perform. The car goes vroom vroom, or you go bankrupt. There's no excusing the car not moving because of structural racism or the male gaze or literal shaking or any of the other crap these quarterwits kick up to obscure the truth. The progs suck, and their ideology is a non-stop series of complaints and curated posturing. Musk's world is binary in an unwoke way; you either do or do not. Their world is not about doing but about being: woke, sensitive, whatever. You are what you pose.

That is the antithesis of an achiever like Musk's – and our – worldview. When Musk called for counsel to come to fight by his side, his criteria was a proven track record of success. Libs would want to know where your grandpa came from, how you pee, and what your pronouns are.

They can throw everything they have at Musk and will, but at the end of the day, they are soft and dumb. He's hard and smart. My money literally remains on Musk.

Conservatives Must Stand Together and Fight. Join Townhall VIP. And Check Out Last Week's Stream of Kurtiousness, I'm Concerned That Trump Is Going to Lose His Influence. And my podcast, Unredacted.

Go pre-order my next non-fiction book, We'll Be Back: The Fall and Rise of America. It owns the libs as it discusses all sorts of terrible scenarios that America might well face. National divorce. Civil war. Barren wine women. And don't forget my Kelly Turnbull series of conservative action novels. The latest is The Split, but get all these action-packed bestsellers, including People's Republic, Indian Country, Wildfire, Collapse, and Crisis!