Will We End Up Invading Canada?

Kurt Schlichter
|
Posted: Feb 03, 2022 12:01 AM
Share   Tweet
The opinions expressed by columnists are their own and do not necessarily represent the views of Townhall.com. 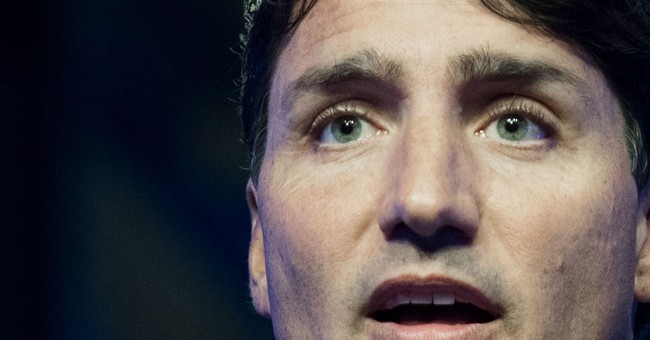 The old stereotype of Canadians as slow-talking, syrup-slurping igloo jockeys has been dashed this week as our friends to the north have launched a peaceful working class revolt against the blackface-wearing clown they have as their prime minister, as well as against that country’s entire ruling caste. We patriotic Americans stand in solidarity with the big rig truckers pushing back against The Man – although that assumes their oppressor’s gender. But, in this Age of Insanity, there’s always the possibility of chaos – even in Canada.

While the good-natured, polite pushback against the globalist establishment has been entirely pleasant so far, the terrified elite’s reaction to it has not. It’s been ugly and could get uglier. All over the world, it is the same when the people of what we once knew as the Free World challenge the powerful. The failed global elite is getting desperate to retain its power, from Austria to Australia. All those alleged principles you hear so much about when you try to protect or pursue your own interests? Forget them. Silencing dissenters. Banning assemblies. Even turning the cops on peaceful protestors. These are the tools in the rulers’ toolbox. You see it here in America too, in government and out. Even Neil Young wants to shut down and gag Joe Rogan for refusing to enforce the official narrative, and is anyone surprised? They adore censorship. They won’t call it that. They call it suppressing “misinformation,” with the definition of that term being anything they don’t want people to hear. And they call protest against the corrupt incompetents of the ruling class “insurrection.”

But the elite’s reaction won’t work. Yet, while that’s good, what’s bad is that this will not stop their bitter defense of their rule. They will take the next step, and the next, to keep their power.

Look at the Americans held in the D.C. gulag as leftist thugs in Portland and elsewhere run free. The government sent SWAT teams to bust trespassers, and it already killed at least one woman for being an unapproved person in the People’s House. Her murderer struts around uncharged and collecting his paycheck where he should be breaking rocks and distilling pruno in his cell’s toilet.

So how does invading Canada fit into this?

Let’s hope it doesn’t, but have you seen a single piece of evidence that convinces you that there is some sort of limit here or in the Great White North as to what the ruling caste will do to retain power? They tried ignoring the truckers. That did not work. Then the regime media and government called them racists. No effect. The government tried to ban the crowds and the convoy. Nope. Then Trudeau announced the Canadian patriots were, essentially, deplorables unworthy of participating in their own fake democracy. But the Canadian patriots have, so far, refused to submit. So Trudeau will inevitably turn up the heat.

What happens next after the elite forecloses any chance that their demands would be considered? How long until Trudeau orders in the Mounties and even the (relatively few remaining) Canadian soldiers to crush the protests? We’ve learned from watching the COVID cops hassle mommies on playgrounds because their kids got on the jungle gym without a face thong that there’s always some pension-collector willing to do the dictator’s bidding.

Except it won’t be enough to stop the people. There are just too many, and they will be too mad. Here’s the problem with foreclosing all means of peaceful protest, which is what censorship and the other oppressions we’ve seen happening do. It leaves only unpeaceful protest.

Might the Canadians revolt? Really revolt, not merely torment sissy city twits by honking through the night? The recipe for that is eliminating all peaceful means of dissent plus doubling down on the oppression. Trudeau already considered using the Canadian Emergencies Act to override civil liberties because of COVID – do you think he would hesitate to do it because of a threat to ruling class power? His alleged father Pierre – who qualifies as a staffer at The Bulwark – used the predecessor War Measures Act when Frenchie guerillas revolted in 1970.

But here’s the thing – there are not enough Canadian flunkies to suppress all the Canadian deplorables. Although they are not blessed with the vast store of weapons that America is – remember, patriots, buy guns and ammunition to lawfully deter and defend against criminals and tyrants – the Canucks probably did not turn all their iron in. And Canadians are a tough and hardy people who can be positively fearsome when pushed too far. Ask all the German SS prisoners the Canadians took after the krauts murdered a bunch of Canuck POWs. Except there weren’t many SS prisoners after that because the Canadians took care of business.

So, you have a uniquely stupid prime minister representing a ruling class that does not believe in the right to dissent and that is terrified that normal people are challenging its power. Further, this buffoon has the ability – and apparent willingness – to declare some sort of state of emergency and use the power of the state to crush those who refuse to conform. Stupid plus fascist equals a potential for a real mess.

Maybe. Once we would have thought throwing open the border was crazy, that dudes winning all the medals in girls' swimming was crazy, that Joe Biden getting a position of responsibility is crazy. And two years ago, the idea of our elite cheering the deaths of those refusing to inject themselves with a medicine that does not work as advertised was crazy too. Folks, we are in the age of the worst-case scenario squared. Right now, the only thing that’s crazy is expecting sanity.

So, let’s play this particular worst-case scenario out. Say Canada goes to hell, and what does Grandpa Badfinger do? Does he just let his fellow globalist go down? Even that senile old pervert knows that’s a bad precedent. Hey, right now Crusty and his pals are willing to send your kids to fight for the ruling class’s prerogatives in a frigid place across the globe. Do you think he would be able to resist the entreaties of his fellow travelers if normal people looked like they were about to seize power next door?

Is this scenario, which is measurably less insane than most of the things going down in the last few years, unimaginable? Nope. Again, dumb + vicious = trouble. Do not, not even for a second, underestimate what the ruling caste will do to hold onto its power. It has shown it is willing to take your job, to silence you, even to throw you in jail. Why would you imagine it would not go as far as it had to in order to preserve the power of a young dummy by sending help from an old dummy?

If there are two things we’ve learned lately, it is that anything can happen, and that the people in charge are fully capable of screwing up beyond our wildest dreams.

Conservatives Must Stand Together and Fight. Join Townhall VIP. And Check Out Last Week's Stream of Kurtiousness, Joe Biden's Very Limited Wisdom. And my podcast, Unredacted.