A Biden Intervention in Ukraine Will Expose American Weakness

Kurt Schlichter
|
Posted: Jan 27, 2022 12:01 AM
Share   Tweet
The opinions expressed by columnists are their own and do not necessarily represent the views of Townhall.com. 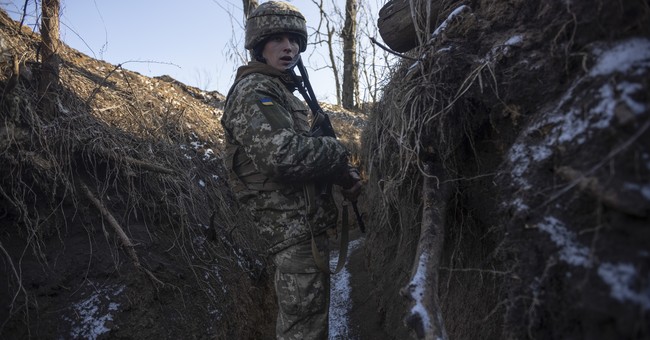 The fact is that our weakness will be on full display to the world should we stumble into this conflict. Putin will achieve his kinetic operational objectives, because we can’t stop him, and we will hand him the opportunity to achieve his information operation objectives as well by once again getting ourselves humiliated by our enemies. Of course, our ruling caste will deny that we have lost. Jen Psaki, with her carrot-colored Baghdad bob, will come out and announce that our failure in Ukraine is actually a tremendous victory for some reason, just like the administration explained that we should be super-proud of the Afghanistan retreat because it was the largest abject aerial rout in human history.

But don’t believe me. Instead, do something all the Beltway brigadiers have neglected to do and pull out a map. Ukraine’s entire northern and eastern border is Belarus (a Putin pal) and Russia. It’s capital Kiev (I’m not going with that fancy new-fangled “Kyiv” nonsense) is right there just south of the border with Belarus. That’s where Putin could head on multiple axes and try to install a puppet government. There are other big towns near the borders too. A lightning attack on those critical nodes is not going to be stopped by our forces backing up the Ukrainians before Putin reaches his objectives. He’s not going to want to push much farther either – why should he? He has the capital, and it would be stupid to get his forces strung out trying to hold the endless Ukrainian hinterlands. I’ve been to Ukraine to train troops – it’s good guerilla country and the people are stubborn and tough. Ukrainian guerillas fought Stalin until the mid-fifties, so Putin is not going to want to get bogged down in the interior’s forests and swamps or in its wide spaces.

And what forces would we use to fight them? The Russians have armor, so if you drop the 82nd in there they become All-American speedbumps. We would need heavy forces. When I was in Europe in the Cold War, there were a half-million American troops in Europe. It’s about 75,000 today. And the forces matter. I was in VII Corps, an armored force of several divisions designed (along with V Corps) to stop a Warsaw Pact invasion of the West. VII Corps had a schiff-load of tanks, fighting vehicles, gunships, and artillery. When it went to Iraq 31 years ago right now, it annihilated a Russian-armed, Russian-trained army in about four days (but after months of preparation, time we don’t have here even if we had the tanks to send there). And the two US corps don’t count the multiple NATO corps we had during the Cold War. But that’s all gone. Remarkably, at one time (West) Germany had a powerful military instead of a glorified camo mime troupe. Where’s NATO now? Busy not caring.

How about airpower? I guess they could fly from Romania and Poland, who would both be thrilled to invite missile attacks on their soil. Remember, there’s no off-limits to Putin. I’m sure the new Air Force policy allowing the use of pronouns in the signature blocks of official documents will be a real asset in combating a world-class integrated air defense system.

So, we’ve got bad geography and scant forces. But hey, we have the advantage of our great leadership at the general level that has brought us victory in Iraq and Afghanistan, and that has presided over our glorious woke new military. Now free of evil internal threats like insurrectionists and dirty, unvaxxed troopers, our military is totally ready to take on a deadly serious, conventional peer competitor on its home turf. Maybe we can soften them up with some synchronized Tik Tok dance videos.

Hey, but we probably have some secret squirrel stuff we can use and some tactics, techniques, and procedures to employ to give ourselves an edge. After all, there are still remnants of a serious military still lurking within the woke joke that our failed leaders have built. And you can be sure the Chinese will be right there, watching and learning about how we fight. Basically, our operations will be one giant spoiler giving away the whole show ahead of Operation Adios Taiwan.

Sound grim? It seems like we might have trouble achieving our objectives. And one of the biggest reasons is that it’s not clear what our objectives would even be. Since none of the usual hawks can be bothered to articulate a vital American interest involved in defending Ukraine’s borders, that makes it hard to come up with objectives for the military. “Stop Putin” is not really a military objective; it’s sort of an amorphous goal.

So what does victory look like? Putin held off to the outskirts of Kiev? Putin tossed back over the Belarus and Russian borders? What’s our desired end state? Or are we not going to articulate that either? Maybe we can just sort of exist in a tense status quo over some sort of demilitarized zone for seven decades or so. Gee, sound familiar?

Now all these questions deserve answers, but don’t look for any since none of the answers are good. And bad answers would slow the rush to war, so we can’t have them come out. Instead, the establishment is going back to the classics. If you ask what America’s vital interest is, you love Putin. If you ask what our military objectives would be, much less how we can rev up the combat power way over there to attain them, you love Putin. Yeah, it’s always a delight to be a vet of the Cold War being who is told he digs the Russians by a bunch of DC saps whose experience with the Bear is trying a Moscow Mule once, deciding it was icky, and asking for a white wine spritzer instead.

The Ukrainians are getting a raw deal, and I hope they drown their invaders in a river of blood. But it’s not our fight. And, if we did fight, there’s a significant chance we would lose. Then every two-bit tyrant on Earth will be coming for a piece of the helpless giant. We’re weak right now, folks, and the worst thing we can do is get up in front of everyone and prove it.

Conservatives Must Stand Together and Fight. Join Townhall VIP. And Check Out Last Week's Stream of Kurtiousness, Just a 'Minor Incursion' into Ukraine. And my podcast, Unredacted.

My Kelly Turnbull conservative action thriller series shows what happens if America splits into red and blue countries. It ain’t pretty. The sixth, The Split, is now out, but get all these action-packed bestsellers, including People's Republic, Indian Country, Wildfire, t Collapse, and Crisis!