Nuke the Insurrectionists or Something

Kurt Schlichter
|
Posted: Jun 28, 2021 12:01 AM
Share   Tweet
The opinions expressed by columnists are their own and do not necessarily represent the views of Townhall.com. 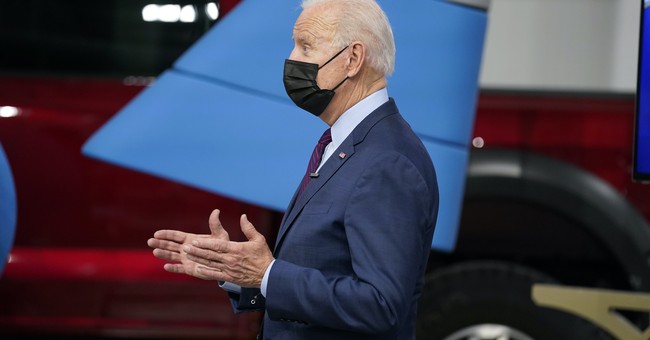 One has to hope that Grandpa Badfinger is merely cruising down Sundowner Drive in his mental Datsun B-210, because the alternative is that our president* is an idiot. Now, both could be true simultaneously – he could be senile and a quarter-wit – but if that were true, it would make this the first time this ridiculous timeserver ever multitasked any kind of achievements, however dubious. Usually, he’s content to fail at just one thing at a time, which makes him good enough for government work, and thereby, for the Democrat Party.

President Asterisk said something remarkably stupid last week, but that requires more specificity. This particular nimrod monologue went as follows: “Those who say the 'blood of patriots,' you know, and all the stuff about how we’re gonna have to move against the government. Well, the tree of liberty has not been watered with the blood of patriots. What’s happened is that there have never been, if you want to, think you need to have weapons to take on the government, you need F-15s and maybe some nuclear weapons.”

His clown-o-logue requires translation into English:

I hope that cleared things up.

So, don’t rebel with your puny AR-15s or we drop a hot rock on you, and also that guy in the Thor get-up and the grannies snapping selfies were about to murder our democracy. One of the myriad questions *’s bizarre notion of nuking us normals ‘til we glow raises is why he expects that the woke, medal-beddecked bureaucrats who have yet to win a war in the last two decades will suddenly be successful if they wage a war at *’s behest upon the American people for the crime of disobeying him and his Geppettos. Moreover, our crusty commander-in-chief spewed this nonsense about how individuals with small arms couldn’t possibly successfully resist the enormous firepower of the American military at the same time a bunch of individuals with small arms are successfully resisting the enormous firepower of the American military in Afghanistan.

We could point out other historical examples, like our own Revolution or Vietnam, where the militarily superior nation was stymied by individuals with small arms (in those cases, the insurgencies grew and the insurgents eventually began fielding conventional formations and still won). But then we also know, because people who voted for *’s told us so, that history began in 1619 when the Republicans forced Democrats to own slaves and then nothing happened until 2008 when Obama was elected. So, history, being racist and also denying the existence of trans people somehow, is not a thing and is worthless to study. Hence, instead of relying on the lessons of the past, we should just create policy out of the verbal memes of a senile old weirdo and see how that goes.

What you don’t want to do is spoil things with inconvenient facts, and lucky for America’s No. 1 Murder, She Wrote superfan, the garbage media is right there, ready to not ask him any of the painfully obvious questions that an actual journalist might ask of this eccentric executive.

But as a public service, let me ask a few, some of which I posed recently in a Twitter thread that was greeted with both conservative acclaim and geneorus liberal panty-wetting.

That seems like an important coule of threshold queries. Say “No” and you look like a fool. Say “Yes” and you’re a fool and a psycho.

“Mr. President, since using force against American citizens is on the table, can you tell us how many BCTs the American military has currently deployable within the United States? Do you know how many troops are in a brigade combat team? Do you understand the logistical needs of a BCT and its vulnerabilities in an insurgency environment?”

A “BCT” is a brigade combat team, 4,000-5,000 troops and the basic ground combat unit. Now, if you are going to pick a fight with 165 million Americans, specifically the half who like America and who own a whole bunch of those accursed AR-15s, you might wanna know how many dudes you have on your side first (I estimate about 80 active and reserve BCTs and equivalents in the whole active and reserve force, including the Marines). One might also want to understand why you would have problems using them here at home.

“How many BCTs do you think you would need to secure an urban area the size of Los Angeles. Didn’t it take three divisions, about 12 brigades, to secure it during the Riots? How long could you logistically support that?”

It did take three divisions (approximately 12 BCTs) to quell the riot in LA in 1992. I was there. Now, that was largely idiots burning and looting. What if the next time it is guys shooting back with evil AR-15s? And America is a zillion times bigger than Los Angeles. How do you hold all that ground? You don’t.

“Have your generals staffed exactly how many American military personnel they could count on to attack American citizens if you ordered it? What percentage do you believe would comply and why?”

Oh, awkward. I was informed – by them, the geniuses in the Pentagon – that “extremists in the ranks” are our gravest threat (except for the weather, of course), so I assume they will have analyzed the number of “extremists” in the ranks who would be averse to killing their own friends and family at the behest of coastal elitists and who would desert or go full Niedermeyer on the guys urging them to wage war on the American people. This would be a good number to have as a planning factor, since when 50% of his troops go *poof* overnight, it would mean a significant reduction in the *’s combat power.

“You mentioned F-15s. How many bombers of all types does the United States have deployable within the continental US? How many are operational? How many sorties could the military fly a day against American citizens? Can you explain how you would employ bombers to hold territory, like a city?”

Bombers are nice. But if they were decisive, you could walk around Kabul without a dozen guys with AKs keeping your Schumer safe. We bombed Afghanistan back into the Stone Age – albeit, it was not much of a trip, but the point remains. You control dirt by having a guy with a rifle standing on it, not plinking at targets from 30,000 feet. And speaking of targeting…

“What means would you use to identify targets to bomb within the United States? What would the rules of engagement be when using bombers against American citizens?”

“How would you protect the supply lines to the fighter bases from attacks by armed citizens? How many of your limited ground forces would you allocate to securing supply lines between bases and protecting complicit forces living off post from retaliation?”

You know what the most vulnerable part of an F-15, or a tank, or any other combat vehicle is? The people and stuff, like fuel, who make it go. Why would * think that he’d not have to devote most of his force to defensive operations as opposed to offensive ones? Oh wait, it’s because he’s a fool.

“Have you considered that the military forces of the National Guard in red states, which include aircraft, artillery and infantry, may refuse or even oppose your campaign against American citizens? Would you attack those forces?”

Oh, that’s a twist. So, does that desiccated clown think that Greg Abbott’s or Ron DeSantis’s National Guard units are just going to join in the oppression fun? Keep in mind, those weekend warriors are a reservoir of wartime experience (many guys like me did a tour in a war, then stuck around in the Guard forever – active-duty units’ turnover is huge, because many are first-termers). Reservists have to maintain exactly the same training standards as the active-duty components and they use much of the same equipment. So, that’s a problem. Oh, and then there’s the most important question…

“Mr. President, how many American would you kill to maintain your hold on power?”

You know, I just don’t think our genius-in-chief has thought this through. And if they weren’t so busy on their heretic hunts and CRT training, maybe our victory-free flag officer corps could enlighten him.

Conservatives Must Stand Together and Fight. Join Townhall VIP. And Check Out Last Week's Stream of Kurtiousness, Military Generals Aren't Conservatives, They're Socialists.

My five Kelly Turnbull action thrillers should be on the generals’ reading list since they are awesome and patriotic, but Mr. Kendi – to the extent that’s his real name – would not approve. My sixth, The Split, is coming in July. America has split into red and blue nations, and our hero has to go back in and basically tear Schiff up. Brace yourself by getting the most recent bestseller, Crisis, as well as my other four novels, People's Republic, Indian Country, Wildfire, and Collapse!