Your Betters For Biden

Kurt Schlichter
|
Posted: Jun 26, 2020 8:48 AM
Share   Tweet
The opinions expressed by columnists are their own and do not necessarily represent the views of Townhall.com. 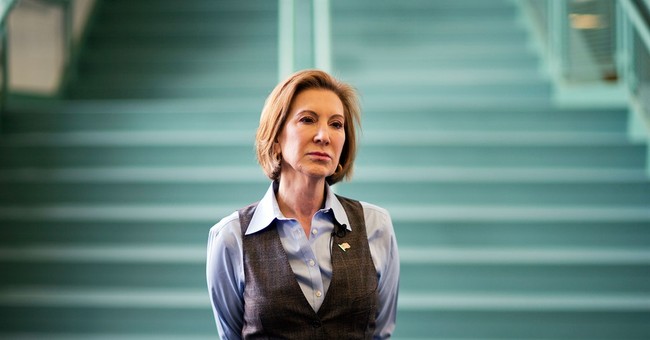 We’re going to see a nearly endless line of nominally Republican Establishment hacks you had long forgotten about announcing that they are voting for Grandpa Badfinger this fall, and the idea is that this will freak out us squares and make us all rethink our support for Donald Trump. What it should do is make us all rethink how we ever got to the point where we once supported the gooey likes of Carly Fiorina and the rest of the dilettantes and cruise ship cons in the first place.

No, we don’t play that anymore. We got woke, the kind of woke you get putting your hand on a hot stove – that image kind of sums up how we actual conservatives feel after decades of supporting losers whose astonishing record of failure is equaled in magnitude by their astonishing self-regard. The best and brightest are neither.

Once upon a time, when I believed in the fairy tale that is Conservative, Inc., I supported Carly Fiorina. She was running in California and was not a Democrat, and I would have supported a talking chancre sore over a California Democrat. At least in the case of a herpetic lesion, getting it might have at least been a little fun; getting the kind of dopey rich Republican losers we tried to use to plug the holes in the dike keeping out communism in the Golden State was no fun at all. Remember Michael Huffington (Mr. Arianna), Meg “I had an illegal alien housekeeper” Whitman and Arnold “Well, I impregnated my housekeeper” Schwarzenegger? “Successful business person” Fiorina was just another of these pseudo-con Crassuses – she looked at the election landscape and thought “I guess today I’ll be… Republican. That way, I don’t actually have to have any political experience – I can just write checks.” And they would inevitably lose like at Carrahae.

This is the problem with nominating rich people because they are rich people. They tend to be losers who do not actually believe in anything other than remaining rich and enjoying the honorific “Senator” or “Governor.”

Like black hole-level, empty walking hairstyle Mitt Romney – father of his Miracle Whip jar of sons Trik, Tagg, Tubb, Tobb, Nimm, Stimm, Muffo, Puffo, Peaches, and Herb – Carly Fiorina encapsulated everything wrong with the old Republican Party. It was the Party of Tax Cuts and Wars, neither of which is necessarily inherently bad (some tax cuts and some wars are groovy) unless those are the only things the party stands for – and for the former GOP, they were. The couture cons like Fiorina thought arguing about abortion was tacky – “That’s something only those Jesus people do,” the swells would sniff – and when our gun, religion, and speech rights were threatened, we were told that our betters didn’t do messy “social issues.”

And they certainly did not do economic issues, at least not on our behalf. If you were a big corporation, they loved you; if you were a small businessperson or a hardworking member of the working class, you were out of luck. And the big corps were busy moving solidly into the Dem column while the GOP geniuses were ignoring the people who made up our party’s base. That’s dumb if you even pretend to care about conservatism.

But people like Fiorina, Joe Biden’s newest, bestest buddy, never cared about conservatism or us conservatives. Her loyalty was ever to her class, not to us. If you wanted to get her attention, you would tell her she was risking dirty looks at the country club and she’d bend to the Establishment’s will like Gumby in a vise. But when millions of Americans cried out at their ruination via outsourcing, well, remember that as a corporate bigwig she gave Bain Boy a run for his money in sending our jobs overseas to our enemies, and got even richer doing it.

Now, these are the people we are supposed to see glom onto Biden and think, “Gee, if these serious, accomplished individuals are siding with that gibbering old pervert, perhaps I should likewise pledge my allegiance to that basement-lurking dementite.” And we are assured these are all the best people. You’ll see generals assure us that the guy playing and (losing at) tag with the squirrels in his backyard is the guy we should entrust with the nuclear codes, and our response should be to wonder why, if these general are so competent, that after 20 years not a single one of them would dare walk around alone outside a Kabul Army base. You’ll see elderly journalists who got canned for fraud resuscitated to instruct us on the immorality of supporting Trump. You’ll see movie stars and politicians and professors and the very cream of the crop of our crappy institutions beseeching us not to exile them from power yet again. They’re all losers. The fact that the likes of Fiorina, Whitman, Romney and Governor Muscles Der Helphammerer are siding with Biden reinforces that we must never fall for their scam again.

The idea of Gropey Joe Biden has never been ideological. It is practical. It is about recovering power for the elite displaced by Trump’s unlikely victory in 2016. It is about a return to the days of an unrestrained, ungoverned governing caste. And that caste is where their loyalty lies – to the bumblers and kleptocrats they meet up with in Davos. It’s remarkable how they not only lie about us – and I chronicle their deceit agenda in my new book The 21 Biggest Lies About Donald Trump (and You!) – but they lie to themselves. These people really do think they are the best and the brightest. Hey, we have our faults – we care too much, work too hard, are too patriotic, and give too much – but we never, say, started Iraq, lost Afghanistan, wrecked Wall Street, imposed Obamacare or slaughtered nursing home patients by filling their facilities with contagious patients.

Never before has there been a ruling class that so lacked humility when it had so very much to be humble about. Its endorsement of Joe Biden is the best possible endorsement of Donald Trump.

Join Townhall VIP.  Also, my new non-fiction book from Regnery, The 21 Biggest Lies about Donald Trump (and You!) drops July 7, and you should pre-order it right now! And don’t forget my novels eerily prescient novels of America torn apart by leftists, People's Republic, Indian Country, Wildfire and Collapse!