What Would a War on the Drug Cartels Look Like?

Kurt Schlichter
|
Posted: Dec 02, 2019 12:01 AM
Share   Tweet
The opinions expressed by columnists are their own and do not necessarily represent the views of Townhall.com. 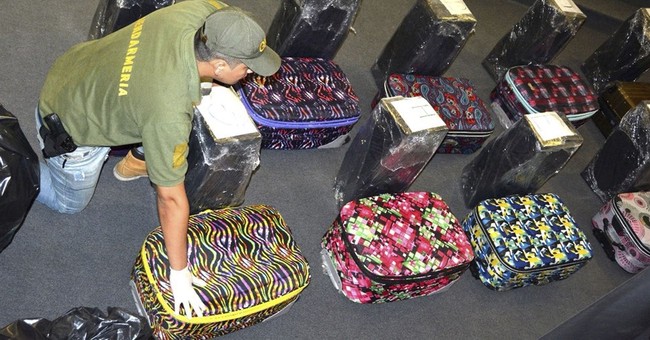 Donald Trump is talking about labeling the Mexican drug cartels that own our failed state neighbor as “terrorist groups,” and this is yet another step toward what is increasingly looking to be an inevitable confrontation. They just butchered several American citizens, including kids, which cannot go unanswered. They murder thousands of Americans a year here with their poison, which cannot go unanswered. But are we Americans even able to answer a bunch of pipsqueak thugs anymore? Let’s put aside the question of if we should use our military against Mexico (I discussed it here in 2018, to the consternation of liberals and Fredocon sissies) and look at what might happen if we did escalate.

None of it is good.

It’s not a matter of the prowess of our warriors. Our warriors, unleashed, would lay waste to anything we point them at. But the question is, “Would we ever unleash them? Would we let them do what it takes to achieve the goal of eliminating the cartels?"

Of course not. We haven’t decisively won a real war since World War II (except the Gulf War, unless you accept the arguable premise that it was an early campaign in a still-continuing Iraq conflict). And there’s a reason we don’t win. We don’t truly want to, as demonstrated by our unwillingness to do the hard things required to win. Could you imagine the Democrats siding with America in a war on Mexican drug cartels? If you can, you’re higher than Hoover Biden at a strip club on a Saturday night.

Again, this is not to say whether a war on the Mexican drug cartels is a good or bad idea. Nor is it to say we do not have the combat power to do it – we do. It’s just to say that America is culturally and politically unwilling to do what it takes to win, or to accept the losses that would come with a military campaign against the drug cartels.

You always start with an objective: what is the end state if we opt for armed conflict? The bureaucratic tendency is to fuzz this part up, to provide some gooey, metric-resistant pablum like “a Mexico where people are free to be the very best Mexicans they can be” instead of something clear and measurable, like “Destroy Los Tacos Malos Cartel by capturing or killing its leadership, eliminating its capacity to grow, process and transport illegal drugs, and ending its ability to influence and intimidate the Mexican government, media and populace.” Why be unclear? Because, of course, if the objective is clear and measurable then the bureaucrats can be held accountable when they fail to meet the objective.

After you figure out the objective, you consider the enemy. Who is it? These are extremely wealthy, sophisticated, and utterly ruthless criminal gangs that have, through “plata o plomo” (“silver or lead,” meaning you take a bribe or a bullet), infiltrated and controlled all levels of Mexican society. Moreover, they have also done so in the United States to a degree we cannot be sure of right now but one that is certain to increase if we go to war. Moreover, they are technically sophisticated, with all the tech money can buy. And they have combat power sufficient to defeat government forces. When some Mexican authorities grabbed El Chapo’s son, the cartel fought back and defeated the outgunned government units.

In addition, and this is key, inside Mexico they can rely on Mexican patriotism to help resist U.S. forces – most Mexicans have no use for the criminals, but less for foreigners. The Mexican president is already decrying an American “invasion,” and many Mexican patriots would side with their evil countrymen over benevolent Americans. Finally, the drug cartels are ruthless. They murder everyone, and everyone’s families, in graphic and spectacular fashion designed to maximize fear.

A massive U.S. invasion is unlikely for many reasons, but there would be a temptation to use special ops types to target key cartel personnel and locations. This can be effective in a counterinsurgency, where you are trying to stamp out rebels trying to overthrow the government. But here, the cartels are infiltrated into the government. You can’t kill a few leaders and go home. Mexican society is infected with the gangrene of corruption. A few SEALs smoking some sicarios is a boon to humanity but it doesn’t win the war. More just take over. To cure corruption, you would have to tear down and rebuild Mexican society a la Japan and Germany after World War II. Anybody up for that quagmire? Anyone? Hello?

America has a whole bunch of peerless killers and death machines – including Conan the jihadi-neutering hero dog – but it’s not clear any of that matters here. Our political class has its own interests in ethnic politics and cheap foreign labor that prevents the most obvious of anti-cartel actions: cut off their drug money by seriously enforcing the border. But no matter how many Mexican students end up beheaded with chainsaws on video, and no matter how many Americans are murdered, there is no way the Democrats and the corporate GOP would ever stand for a real border. Combine that with the currently fashionable baloney about the “War on Drugs” and you know that even as Americas troops fought it out with bullets, their country would be utterly unwilling and unable to do the one thing that might actually crush the cartels.

So, what do we do? Order some Delta Force hits in Sinaloa? Some drone strikes? That’s drug dealer Whack-a-Mole. Another one will just pop up for every one we kill as long as that border is open and the money is flowing.

And here’s another thing: do we imagine that the cartels would just sit back and take it? Do we think they would just shrug and let our attacks go unanswered? The mere fact that we would be unwilling to take the one step that actually might hurt the cartels for real demonstrates our weakness and our own vulnerability. Our war on them would mean their war on us.

The enemy always gets a vote, and they would obviously vote to attack us here in the United States. Yes, on our territory (it has happened before), including the same kind of massacres and horrific murders going on all the time in Mexico that we read about buried in the newspaper behind the 20 pages of the latest on how awful Trump is. The cartels understand the power of terror, and we are weak. We have no stomach for the kind of fight this would be. A few slaughters of ordinary Americans by cartel gunmen in Houston or Tucson and any semblance of unity behind taking out the cartels vanishes. Far too much of our establishment would forgo the righteous vengeance that would be the appropriate response and blame America first.

Our troops would get to come home from war awaiting the inevitable betrayal by the Democrats seeking to prosecute them for “war crimes” for doing what we asked them to do in the dirtiest kind of war imaginable. And the billions we let flow south unimpeded in exchange for the drugs we let flow north unimpeded would come back to bribe many of the officials and politicians sitting in judgment of our fighters. America would be humiliated and corrupted. The Democrats would side with the enemy, calling a war designed to save Mexican lives “racist,” causing further political chaos here.

The sad fact is that our establishment does not really want to take on the cartels. The failed state next door is a distraction from their real priorities: Ukrainian/Russia tiffs and getting sideways with NATO allies over communist Kurds. Nor do they want to gin up public pressure to take the only action that would devastate the cartels: seriously defending our own border. They want the new voters, they want the cheap labor, and they don’t care how many Mexicans and Americans die to keep them both flowing.

My latest novel Collapse visits future Mexico, and it is now out as an ebook and paperback, having roared up the Amazon bestseller list thanks to you. It’s the hard-hitting yet hilarious sequel to People's Republic, Indian Country and/or Wildfire and, besides guns and explosions, it features cameos by such luminaries as James Comey, Alyssa Milano, the great international star Nick Searcy, and even Cap’n Ahoy himself, Bill Kristol, who hailed these books as “Appalling.” You’ll want to get them all!