All The People Who Think They Are Better Than You Are Much, Much Worse

Kurt Schlichter
|
Posted: Aug 22, 2019 12:01 AM
Share   Tweet
The opinions expressed by columnists are their own and do not necessarily represent the views of Townhall.com. 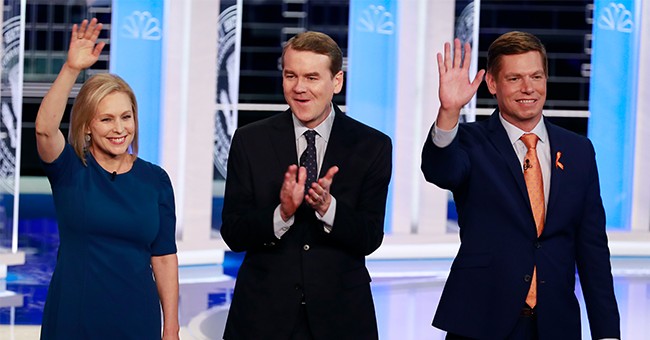 Now our grotesque liberal elite, backed up by the Fredocon goobers whose awakening into wokeness happened to perfectly coincide with their utter rejection by us actual conservatives, have decided that our entire history is based upon slavery. The New York Times is spearheading this latest trash-the-rubes initiative, fresh off its "RUSSIA! TREASON! COLLUSION! EMOLUMENTS!" humiliation. Trying to shame us – many of us literally veterans of the Cold War – with allegations of partying with Putin didn’t work out so great, so why not pivot to morally undermining us for having slaves we didn’t have?

Our elite is such garbage. As I’ve asked before, is it too much to ask that our elite actually be elite?

Never before have so many snobs had so little to be snobbish about. It’s not like the ruling caste that turns up its collective snout at the people who actually make this country work has a CV full of achievements to back up its arrogance. Our elite is anything but. It’s a collection of pedestrian mediocrities who inherited our civilization from the people who actually created it and fought for it, and like every spoiled child who was handed free stuff by his doting mommy and daddy, our elite is resentful and obnoxious.

We’re ruled by a bunch of Veruca Salts.

Of course they don’t appreciate what it takes to build, feed, fuel and defend what we have – as a group, they didn’t do any of those things. No one appreciates what he didn’t work for and earn, and our alleged betters did not work for and earn the positions and prestige they hold at the heads of our institutions. They got where they are by just showing up, and by parroting hacky, politically correct dogma, not by actual achievement.

Look at the freaks our universities are pumping out – they can’t read, they can’t write, they think history started in 1996, and the only things they ever created are evermore tiresome and weird gender identities.

Hello, I am Teddy Roosevelt. I was born wealthy, won the Medal of Honor, busted the trusts like this Facebook atrocity of which you speak, and I literally punched out a bear once.

Yo, my name is Kaden. I’m an otherkin-identifying, non-binary gendered, two-spirit from Brooklyn with a degree in Climate Change Ventriloquism from Yale. I’m not ashamed to cry when I see a MAGA hat because my mom says my feelings are important. Bernie is too patriarchal for me, so Beto 2020!

Here’s a question, and it’s a fair one. What has the ruling class done right in the last 20 years?

Come on, betters, “wow” us with your mad society-running skillz.

We know what America achieved under the old ruling class. It beat the Nazis – the real Nazis, not the fake bugaboo “Nazis” that the left labels everyone to the right of Felonia Milhous von Pantsuit. It fought through the Depression. It trashed the Democrat’s Jim Crow regime. It designed the ’65 Mustang, created the Big Mac and put a man on the moon. It crushed the dirty commies in the Cold War. The old elite was not perfect, but at least you can point to some tics in the “WIN” column.

Not so with the coterie of half-wits running our institutions today. It’s all check marks under “LOSS.” Iraq. The Wall Street Meltdown. Obamacare. Obama himself.

Oh, and then there’s Jeffrey Epstein.

Do you see a lot of successes? Do you see any? Have I overlooked some tremendous victory this generation of our betters pulled off? I can’t think of any offhand – gee, how about social media? Yeah, there’s progress.

We are actually losing ground. Our light bulbs don’t light anymore, our front-loading washing machines don’t wash anymore and our straws don’t straw anymore. Even our Star Wars movies today are exponentially crappier than the ones from 40 years ago.

So, what’s just one great thing the magnificent, magical masterminds of our elite have pulled off since maybe 2000?

That’s not a thing.

And even that nonsense only applies to us Normals. For all their newly-woke awareness of their privilege, have you ever once seen a single member of our alleged elite argue that due to its privilege, the elite should give up some of its power? You and me, sure. We totally need to give up our freedom and our money too, but have you ever seen a single policy prescription for one of the pseudo-crises the elite is constantly trying to pimp turn out to be that they stop being in charge, that they give up some their ill-gotten gains?

Please. They’re so concerned with global warming that they all have to take private jets to Davos to tell us we need to start biking to work.

Yet, with a track record unbroken by success and unmarred by anything like competence, our elite still offers us a laundry list of tasks it demands we Normals undertake. And, astonishingly, it does so with a straight face, and if it could back up its arrogance with some sort of history of accomplishments beyond the level of, “Well, our generation of leaders is the very best us we can be!”

There’s a healthcare crisis, and our task is to give up our freedom and give up our money to the elite to solve it.

There’s a gun crisis, and our task is to give up our freedom and give up our money to the elite to solve it.

There’s a climate crisis, and our task is to give up our freedom and give up our money to the elite to solve it.

What have they ever solved? Hell, they created most of these problems in the first place. They whine about student loans, but who set up the college cash machine that is American academia? Our medical system is a wreck? Dudes, our medical system is Obamacare, and you’re the ones who stuffed it down our gullets!

In what way has our garbage elite proven itself capable of doing anything right, much less overseeing our doctors, protecting our newly-disarmed citizenry and controlling the weather? In no way – which is why they hate accountability, and why the elite’s lapdog media is entirely unconcerned with the elite’s constant screw-ups and utterly focused on the invented flaws of those of us who refuse to be serfs of incompetent elitist twerps.

They figure that if maybe if we can be shamed into subservience, they can get on with their civilizational pillage unimpeded by us Normals demanding accountability. Calling us “traitors” didn’t work, so they figure maybe trying to hang slavery around our necks will.

What happens if the useless elite prevails? Well, find out in my action-packed yet hilarious novels about the United States’ split into red and blue countries, People's Republic, Indian Country and Wildfire. The Never Trump losers tried to label them “Appalling” because they mock their liberal masters, so that’s validation of their wokeness!