California Is The Future The Liberal Elite Wants For You

Kurt Schlichter
|
Posted: Jun 06, 2019 12:01 AM
Share   Tweet
The opinions expressed by columnists are their own and do not necessarily represent the views of Townhall.com. 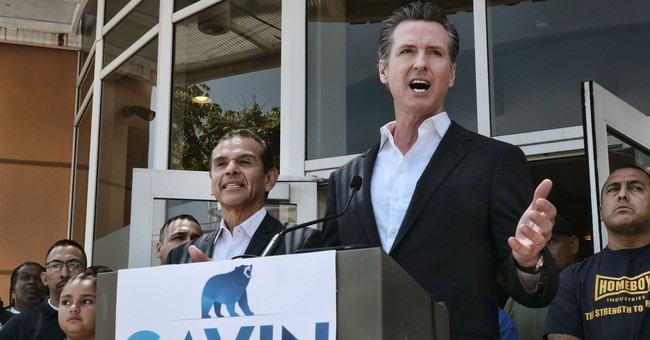 California has morphed from paradise into a garbage state run by garbage people for their own garbage benefit and amusement. The “garbage” part is literal – once the Sierra Nevada mountains symbolized the state; now, towering heaps of trash and human waste do. Welcome to what the Democrats want for all of America. Just watch your step. Literally.

If it were not for the climate, something the liberals in charge of my state have nothing to do with as much as they think they do, it would likely be a nearly empty desert once again. But the sun shines, the beach beckons and the palm trees sway over a population of morons who keep electing proggy fascists to run the place. Which they are doing, right into the ground.

Where once people flocked to make their dreams come true, you now pay multiples more for a U-Haul heading out than heading in. The great California middle class, made up of the Normal people whose hard work and ingenuity made it the Golden State (even though Hollywood types got the publicity), is fleeing to places where they can afford to live, and where the government doesn’t hate them.

And hate them Sacramento does, targeting Normals with petty and not so petty attacks, from bans on straws and gun grabs to the threat of lifting the Proposition 13 caps on property taxes that keep millions of retirees from being tossed out of their homes when their annual bills go up 4000%. What would that mean? Well, when that modest ranch style you bought for $100,000 in 1985 gets reassessed to its current $1,000,000 value (something Prop 13 prevents), and the 1% Prop 13 tax rate goes to 3% or 4%, your tax bill goes from $1,000 a year to $30,000-$40,000. Remember that retirement you worked for? Well, now it will all go to subsidize the deadbeat government workers and welfare cheats that the California Democrats really represent.

“No, that’s crazy talk! That would never happen!”

Already, petty crime has been effectively legalized. Crooks get a free pass on the first $950 a day they steal. The casual larceny and other offenses that make life unbearable are becoming more and more common as liberal laws release criminals to victimize regular citizens. This is known as “justice,” as if someone who steals from a hardworking businessman is being cruelly put out by being arrested for it.

And now pot’s effectively legal here, which is spectacular. Just what Cali needed – more people on a drug that makes them dumber and lazier.

Take a walk down the street and see the sights! Look, there’s a schizo with his cargo shorts around his ankles baying at the billboard informing you about how no human being is illegal! Oh, and there’s another homeless druggie muttering to himself about alien carrots stealing his vital essences as he pushes along his stolen shopping cart heaped with refuse. If you’re appalled or distressed by this, you’re the bad guy. Caring means letting lunatics and addicts wallow in the elements enslaved by their insanity and/or sickness. Shame on you for wanting your kids to be able to play outside. Hypodermic needles and piles of human waste on the sidewalk are just part of the price you must pay to dwell in the sun.

This does not go for the nice areas. The liberal poohbahs don’t play that in their neighborhoods. See how quick a mangy doper wandering through Bel Air gets swooped up by the 5-O. This kind of virtue is for your neighborhood; in the ruling class enclaves they only do the signaling.

Take a drive down California’s famous freeways. Actually, not a drive – it’s really a crawl. Putting aside the potholes, there’s been a conscious decision to not improve traffic flow by making the roads wider to accommodate all the illegal foreigners that Sacramento has laid out the welcome mat for. This is intended to force us into public transportation, which the central planners love. After all, when we have cars we can decide where and when to go and they don’t get a veto. They hate that. Our independence and sovereignty gnaws at them.

They hate freedom. Well, our freedom. Not their own – all their climate change talk about sacrifice and stuff is meant for us. We do the sacrificing. They do as they please and preen in the moral spotlight for forcing us Normals to live like serfs.

When a Hollywood star or a tech titan gives up his limo or private jet, let me know. I’ll be right here, not holding my breath.

Which raises the question of why I am still right here in California, as I have been since 1972 except for my time away in the Army. At the outset, the “If you don’t like it, move,” argument is a garbage argument made by garbage people. This is my home and I see no reason why I should leave simply because I demand freedom and competent government. At least, for the foreseeable future, before the chaos comes.

Second, I like the sun, and I like the part of California where I live. You see, I’m a trial lawyer. Leaving aside that California’s idiotic laws make this place an Eden for attorneys, I live in one of the good parts, beach adjacent, surrounded by other people with nice cars, protected by cops who actually will take action. Leave my little Shangri-La and it gets ugly and grimy, but in this little blue enclave, everything’s generally peachy – for the moment. Out there are the peasants. In here are the feudal lords. Most of those social pathologies I mentioned are for them, not us. California is divided up into a few well-off people and a huge majority who scrape by. In much of West LA, or Silicon Valley, or parts of Scat Francisco, things are pretty nice. Everywhere else, not so much.

Of course, that can’t last. The snobs and swells of Cali can’t see that any more than the nobles of Paris saw the guillotine blade dropping. I expect to be gone before the collapse, with my money, but hey – I’ll be watching the chaos on Fox. You rich libs, please try to look surprised!

But, you wonder, won’t California get its act together before it’s too late? Of course not. It’s important to understand that there is no bottom, that no matter how impoverished, oppressive and generally miserable a land under the Birkenstock heel of socialism becomes, the cadres of the Red Guard will never shift course towards

freedom. After all, freedom and prosperity are not their goal; in fact, those things are obstacles to achieving the true objective – unlimited power for the leftist nomenklatura.

California will continue to circle the drain, and barring revolution – a real one, with all the attendant bad stuff for the ruling class – there’s no coming out of it. They’re dining on zebras in the Caracas zoo and yet the socialist revolution marches on. California is no different; it’s just a decade behind the Venezuelan vanguard.

It’s doomed. And what’s important to understand is that the liberal elite wants the same thing for the rest of America. To our ruling class, California is not a cautionary example. It’s the goal for our whole country.

Are you going to let that happen?

I write about what happens when the left reaches rock bottom and proceeds to keep digging in my action-packed yet super-snarky novels about the United States’ split into red and blue countries. People's Republic, the first of the series, takes place in California. Indian Country andWildfire carry on the story. Not surprisingly, liberals and the sissy castaways from the Weekly Standard hate my novels, calling them “Appalling.” With a blurb like that, you can’t pass them up!