How About A Red, White And Blue New Deal?

Kurt Schlichter
|
Posted: Feb 11, 2019 12:01 AM
Share   Tweet
The opinions expressed by columnists are their own and do not necessarily represent the views of Townhall.com. 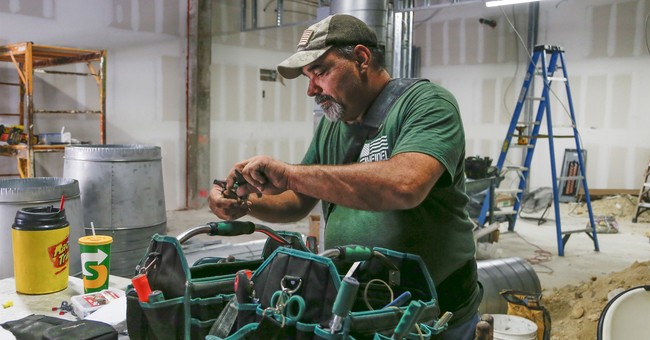 I know many Americans are chomping at the bit to turn our entire economy over to a bunch of coastal blue city hipsters and college professors, along with all our money and our personal freedom, because of a dubious moral panic over future weather, but I’d like to suggest a better idea. I call it the Red, White and Blue New Deal, and it’s a little different than the proposed Green New Deal that seems to benefit only virtue signaling limo libs, crony capitalists, and aspiring commissars. The Red, White and Blue New Deal would, instead, be directed at benefiting Normal Americans – you know, those people who built our country, feed it, fuel it and defend it. People like you and me. So, here it is. All of it:

That’s it. That’s my Red, White and Blue New Deal.

Now, one of the virtues of my innovative proposal is its simplicity. It requires no “massive” mobilization of our whole society in a collective campaign to pursue some arbitrary goal that a bunch of liberals who never ran anything but their lying mouths picked out for us. It requires no additional national debt. It requires no huge, unresponsive deadweight bureaucracy to implement. In fact, it requires nothing at all besides what you and me have always done – work for a living.

Here it is again, in its entirety:

Now, the left is going to find this comprehensive scheme problematic for many reasons, primarily among them because it does not take the fruits of our labor and our freedom and hand them over to those very same leftists. As you look at the Green New Deal, you may wonder, “How does this plan make me freer or more prosperous?” But, of course, it does neither. Neither your freedom nor your prosperity is the purpose of the Green New Deal, nor the purpose of any of the other countless moral equivalents of war they are always proposing. Climate change is just the latest excuse for their pinko power grab. If it wasn’t the fake weather religion, it would be some other imminent danger of certain doom that required you to give up your money and freedom RIGHT NOW NO TIME TO THINK THE CHILDREN THE CHILDREN THE CHILDREN!

It’s funny how the solution to every problem the left obsesses over is having leftists take away your money and your freedom.

But, in my Red, White and Blue New Deal, no one takes anything from anyone else. You take care of yourself, and you get left alone, which is frustrating for the left because the left exists to steal what you have earned to redistribute as the left sees fit, and to command you to do, think, say, and feel as the left sees fit.

Again, here is my Red, White and Blue New Deal:

Now, my plan differs from the Green New Deal in several other key ways. The Green New Deal provides that at some point in the next few years America will end fossil fuel use, meaning you will no longer be able to drive your awesome Mustang or BMW. But with my Red, White and Blue New Deal, you can drive whatever you please. You just have to pay for your own car and the gas and stuff.

Flatulent cattle is a challenge the Green New Deal is ready to face, presumably by transitioning you away from delicious beef into some lesser food the leftists decide you can consume. But with my Red, White and Blue New Deal, you could buy, with the money you earned, whatever you felt like eating. You might choose a delicious steak, or you may select whatever hideous tofu garbage the leftists think you should be eating. You would support yourself, and other people would leave you alone to choose how you spend the money you earn.

The Green New Deal, which is supposed to be about fighting the pressing threat of slightly different temperatures in the next century, also contains a bunch of other stuff that one might not think play a part in controlling the climate. Odd, but these prescriptions to reach whatever perfect temperature we are supposed to reach (the creepy weather cultists never seem to tell us what the “right” temperature is) correspond exactly to the classic Marxist wish list – redistribution, nationalization, and the central planning of the economy. Strange how that works.

Presumably the people who make the DMV a delight and made Obamacare a smashing success will totally get it right this time if we only give them exponentially more power. Hey, no one pay attention to the Venezuela behind the curtain!

The Green New Deal is all about its version of “economic justice,” so under the plan we taxpayers would provide an income to those “unwilling” to work. How freebies for malingerers cools the planet is unclear. Regardless, my Red, White and Blue New Deal – which is “Support your own damn self and leave me the hell alone” – takes a slightly different approach. That is, if you are unwilling to work, you get nothing.

And it’s not just money that you would not get. You would not get a free apartment or free medical care or a free iPhone either. See, under my plan, you work, and what you earn you can choose to spend on things that are important to you. For example, you may choose to spend your money on booze and drugs, in which case you would get fewer things like food and vacations and doctor visits. Or you may save your money, and buy a nicer car or a better home or get that weird mole removed. It’s all up to you! This radical idea of allowing you to set your priorities and then choose how to achieve them, like by working harder or saving your money, really annoys leftists because it leaves no place for them to tell you what to do.

Of course, charity would still exist. I, for instance, do give now, and would continue to choose to give, to help people down on their luck by circumstance to get back on their feet and back to supporting themselves, at which point they would be left alone because they are now supporting themselves, as every self-respecting American citizen should.

Unlike the Green New Deal, under the Red, White and Blue New Deal, not forcing hardworking Americans to support the laziness of shiftless lay-abouts is the foundation of “economic justice.”

My latest novel, Wildfire, and the earlier installments People’s Republic and Indian Country, show the Green New Deal in action after America splits up between the blue and the sensible states. Heck, I thought it was a bit edgy to predict the left banning private cars and requiring permission to fly on planes (assuming you have the carbon credits!), yet these commie dorks overcame my books with their reality.

But hey, they’re destroying everything else, so why not also the ability to write right-wing action thrillers? But I’ll keep working, and I’ll keep doing as I please.

One last time, here is my Red, White and Blue New Deal, in its entirety: