Kurt Schlichter
|
Posted: Oct 29, 2018 12:01 AM
Share   Tweet
The opinions expressed by columnists are their own and do not necessarily represent the views of Townhall.com. 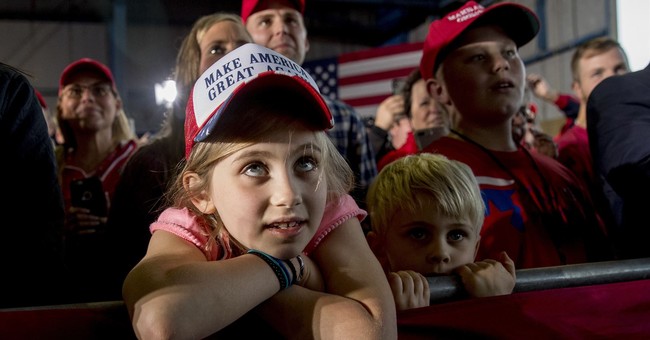 You know, there's nothing that Normal Americans can identify with more than a guy living in a Ford panel van covered with Trump memes and soccer manifestoes who sends bombs that don't work to Democrats who support policies that don't work. Likewise, Normal people totally identify with – let me get the liberal narrative du jour right here – a Trump-hating freak who shoots up a synagogue. And I think it’s a terrific midterm strategy for our Democrat friends is to keep making that idiotic case. (extreme sarcasm for the benefit of the willfully obtuse)

The Official Media is in a frenzy explaining how Donald Trump personally instructed Kooky Weirdo de Florida to mail pipe bombs to washed up Dem hacks and that nameless garbage being in Pittsburgh via a series of cunningly encrypted dog whistles. “Make America Great Again” is apparently code for “Mail bombs!” Nothing says “Murder Jews” like moving the embassy to Jerusalem and ending the Iran deal.

Oddly, of 63 million Trump voters, only one jerk managed to decode this cipher. The other hated Trump for liking Jews too much. But, as CNNMSNBC’s brain trust and such thinkers as rock legend Joe Scarborough teach us, their crimes are on all of us anyway for some reason.

We’re all to blame for one kook’s real terrorism because…well, he thought Trump was part of the giant Zionist conspiracy to make him a friendless loser, so it’s not clear why. Maybe it being a useful lie is reason enough.

We’re also to blame for the other idiot’s pantomime terrorism pursuant to the dippy moral calculus proposed by the same peeps who spent eight years slobbering over the protege of Bill Freaking Ayers. Ayers, as you would never know from watching our media, was a leader in an actual campaign of political bombings that actually maimed and killed actual people. So, when libs feigned shock at those raising the possibility that leftists might be responsible for doing something leftists had a history of doing (as well as a history of faking hate crimes where they were the victims) at a politically convenient time, the faux outrage rang hollow.

And how faux the outrage was - and so very selective too. Leftists demand you ignore the near-miss massacres at the Family Research Council and the baseball field by committed leftists who were not any crazier than their political allies, only more proactive. The message is that you Normal Americans are complicit for voting for a guy who doesn’t hate your guts.

I think that on November 6th, the Democrats are going to get a message back from the people they are shamelessly lying about.

Normal voters are not going to look at this blood libel and say, “Yeah, I feel personally responsible for the actions of that Elizabeth Warren-channeling fake Indian stripper guy with a kilometer-long rap sheet who totally would not have done anything nutty if it weren't for Trump. And also for the crimes of a scuzzy coward who hates Trump. I guess I have a moral obligation vote for people who will ruin this surging economy, restore America to its rightful place as a laughingstock on the world stage, and attack my rights of free speech, free exercise of religion, and to keep and bear arms to protect myself from exactly these kind of aspiring Stalins. Because that idea makes sense. I'm convinced.”

I think Normal people are going to be furious at these lies. I think they see how liberals and their water-carrying Fredocon lickspittles are making a desperate play to stop the Republicans’ momentum going into the election. And it is not like the Liberals have had a really good sense of what issues to glom on to lately. They thought crucifying Brett Kavanagh with false claims was going to stir up a blue wave. The electorate turned towards the Republicans. They thought that a caravan of greedy foreigners coming north to cash in on our welfare state was going to do it. The electorate turned towards Republicans even harder. Gee, what to do? It's not like they can run on their crappy policies…

Oh, here's a great idea. Let’s tell Republican voters that they are personally responsible for the actions of some fruitcake nimrod who looks like he’s on a day-pass from the mid-1990s WWE and another loser who sounds like a Goebbels fever dream. Good plan, if you've never met a Normal person.

But liberals haven’t, because they hate Normal people. As I recount in my new book, Militant Normals: How Regular Americans Are Rebelling Against the Elite to Reclaim Our Democracy, the problem for our elite is that it has lost the ability to hide the fact that it detests the very people it presumes to rule. And until we can get rid of this whole democracy thing, those people are going to have a say in who rules them. And I expect they will say “No” to people who hate them

The fact is this latest okey-doke is isn’t going to work. It's transparent baloney, and Normal people see it. One of the big challenges the liberal elite faces is the fact that it refuses to concede that their opponents – i.e., people like you – are not utter idiots who don’t know they are being grifted. They have to think we are stupid, because they have no achievements of their own and assuming we’re dumber than they are is the only way they can feel superior to us. As a result, they adopt ridiculous strategies because they can't accept that we're smart enough not to be fooled.

“How about 35-year-old charges against a guy where the accuser can't even say where it happened, and on top of that, let's accuse him of liking beer? Yeah, that will work.”

“I know. We can pull on their heartstrings by showing a bunch of Honduran flag-waving foreigners demanding free stuff as they march up towards America and we can show how mean old Donald Trump won't let them in, but we would. That will convince Normal Americans to vote for us!”

“Okay, those didn’t work. How about we accuse Normal Americans of being complicit in history’s least effective bombing campaign run by a dude who looks like he escaped from Ringling Brothers? Not enough? How about we also blame Trump voters for what a guy who hated Trump for not hating Jews enough did in a synagogue?”

Yeah, that’ll totally not ensure every potential GOP voter will be heading to the polls to check the box beside the candidates with the R’s. You guys go with that.

My new book Militant Normals: How Regular Americans Are Rebelling Against the Elite to Reclaim Our Democracy is out there now, unleashed, untamed and uncensored. Check it out.