Kurt Schlichter
|
Posted: Oct 18, 2018 12:01 AM
Share   Tweet
The opinions expressed by columnists are their own and do not necessarily represent the views of Townhall.com. 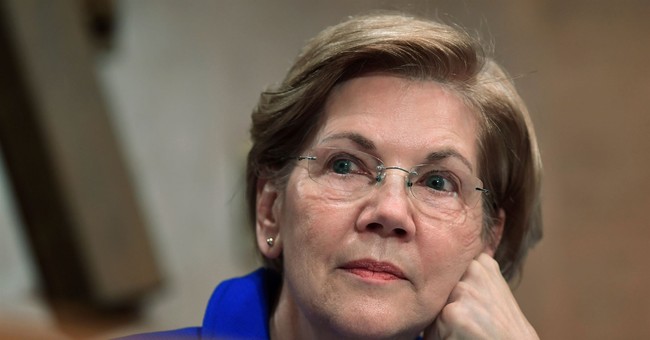 It’s really tough to think of any fresh new ways to mock noted 1023/1024 white person Elizabeth Big Chief Miracle Whip Warren, so I admit I approached writing this column with some reservations.

Oh, snap. This is too easy, like convincing a college sophomore from Santa Monica that America can embrace socialism, yet her daddy will still be able to buy her a cute BMW convertible.

It’s also irresistible, and so right, to mock this ambitious poser. I can just see the old Mazola ad with the Indian woman saying, “Your people call this ‘corn.’ My people call it ‘maize,’ so Elizabeth Warren calls it ‘corn.’”

The thing that gets me is that Fauxcohantas actually thought that going public with her fractional indigenous-osity was a good idea. She really did – this is the keen, considered judgment of someone who wants to have her finger on The Button, folks. I’ll take the reality star who scores with Playmates and can’t be Tonto-shamed any day.

Yes, somewhere, inside her circle of sycophants, they talked this through and decided that it was a savvy political move to announce with great fanfare that the first female Harvard law professor of color’s color was 99%+ white.

Take that Donald Trump, who is now racist for mocking a manifestly white person for pretending not to be a white person, which she manifestly is. Oh, and you’re racist too, for some reason.

Who are these bubble-dwelling lunatics? Well, I wrote about them in my new book, Militant Normals: How Regular Americans Are Rebelling Against the Elite to Reclaim Our Democracy, and I am not nice to them. Not even a little. Because they are stupid, and they think they should tell us how to live, and that’s not happening.

These are the same people with the wisdom and insightful grasp of human nature who reasoned, “This DNA test that shows Liz is about 1% Indian, so it will definitely convince Normals that she was totally right jumping aboard the affirmative action gravy train!”

Again, the people who thought this was a good idea want to rule us.

The elite, particularly the liberal elite, is totally out of touch with Normals. For that matter, so is the conservative-ish elite, many of whom think they’re contributing to the struggle by selling you a cruise where you can listen to Fredocon weasels like the insufferable Ben Sasse nagging you while sipping Zimas on the Lido Deck.

But it’s the liberal elite that actually imagines that we buy into the same bizarre constellation of racial weirdness that dominates their clique. They rank and rate everyone by their perceived position in the grand hierarchy of grievances. Warren gets 5 victim points for being a girl, and 20 points for being an Indian. If she only dug chicks, wore a burka, and had a limp, she would hit a grand slam in the victimhood World Series.

Their racism, sexism, and other -isms and -phobias are all so stupid that you can’t help but point at their prejudices and laugh, which really sets Shoveling Bull on the warpath because to her and her elite pals, it’s all so very, very serious.

They actually believe this bigoted garbage. And they hate us because we don’t. And they really hate us when we laugh at them.

But how are we supposed to react? Are we supposed to take them seriously? Nah. We look at people for who they are. Some guy used to call our criteria for evaluating others “the content of their character,” but our alleged betters now dismiss that crazy talk as the ravings of some Christian kook mansplaining away his privilege. We live in the real world, where this nuttiness doesn’t fly, as opposed to an elite that lives in the institutional nuthouses of academia, the media, and the Democrat Party where this nonsense is their secular religion. With them, it’s a constant struggle of the unoppressed oppressed bickering over the spoils of victimhood.

We’re too busy to care about immutable characteristics, and even if we weren’t we wouldn’t do it because we think caring about that stuff is stupid. Our elite, on the other hand, appears to have nothing better to do than obsess about who fits in what category. Why? Well, our elite’s track record over recent decades is pretty much an unbroken series of failures and fiascos. Since they can’t actually do anything, they really have little else to distinguish themselves with besides their membership (or fake membership) in some oppressed group.

Yet, these are the people who think they should be ruling over us. They think we’re the mindless idiots, and they can’t even see past someone’s skin tone. Pathetic.

Again, hard pass on your proposed reign of racial error, kemosabe. We’ll stick with that “content of your character” stuff.

My just-released book Militant Normals: How Regular Americans Are Rebelling Against the Elite to Reclaim Our Democracy is annoying liberals, pinkos, SJWs, comm-symps, Never Trump sissies, and people who think Elizabeth Warren totally is a Cherokeee. Order it now to own them all.