We'll Remember In November: This Kavanaugh Witch Hunt Is Radicalizing Us Normals

Kurt Schlichter
|
Posted: Oct 08, 2018 12:01 AM
Share   Tweet
The opinions expressed by columnists are their own and do not necessarily represent the views of Townhall.com. 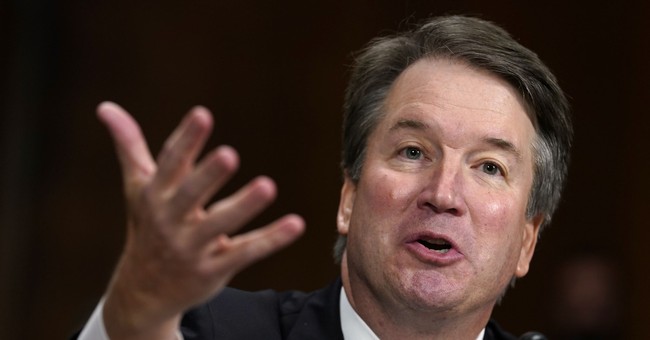 When you get a call from a fellow hardcore conservative and, his voice bristling with uncertainty and confusion, he confesses “I, I love the new Lindsey Graham,” you know something is up. Even McCain’s MiniMe, who has rarely passed up an opportunity to irritate us battlecons, can’t stomach this garbage slander from his garbage colleagues.

The fact is that this whole disgusting Brett Kavanaugh grift has radicalized both Normals who usually avoid politics (thereby demonstrating their wisdom) and alleged conservatives who have been living in a fantasy world where our opponents were good faith friends who just disagree with us on some issues. TheCirque de Kavanaugh disgrace put an end to that comforting delusion.

If only someone had written a hilarious book about how Normal Americans woke up to the fact that the people who presume to lead our society hate our guts. Oh wait, I have. It's called Militant Normals: How Regular Americans Are Rebelling Against the Elite to Reclaim Our Democracy and I can swear in it, which is necessary to adequately describe the people attempting to destroy the foundations of our freedom to secure their grubby little slice of the pie. And this attack on Kavanaugh, which Normals rightly see is an attack on them, has cranked the tune that started with electing Trump to ear-shattering volume.

Why, look at the polls. Can you hear us now, libs?

They went after a guy who, despite his credentials, lives like a Normal. He coached his kids team. He went to church. He liked beer. He still likes beer. He also liked UB40, but nobody's perfect.

Even the gimpiest of conservagimps can't pretend that the attack on Kavanaugh isn't an attack on us. The last few weeks has made it impossible for them to live in denial any longer. Hell, when Bret Stephens wakes the hell up you know the alarm is going off. At this rate, next we will see anti-Trump sex symbol George Will announce that the Democrats have been “unsporting.”

Oh, there are still a few simpering Fredocons out there desperately hoping that they can get things  back to normal, which means showing their bellies and gobbling up the occasional scrap from the liberal establishment table. Jeff Flake’s cowardice in the face of a pair of shrieking leftists is one example. Ben Sasse, who writes books no one reads about how we aren’t as moral as him, decided to go AWOL while a good man's reputation was being slaughtered, only to poke his head up to go after Donald Trump for daring to,point out the myriad holes in the accuser’s ever-changing story. Pathetic. There's a strain of conservatism that is simply gutless; the good news is that pretty soon we will kick all of these dorks out of office and they can go ahead and headline some of Bill Kristol’s cruises.

But the rest of us are woke, and getting woker . We are red-pilled, and getting red-pillier. We are getting, you might say, militant.

See, we Normals get that if they can do this to Brett Kavanaugh, they can do this to anyone. If they win, they can destroy anyone Normal, or Normal-friendly, by a mere accusation (Notice how none of this applies to the elite – since they really don't care about sexual abuse, their own gross collection of woman beaters, abusers, and pervs get a pass). This is the left’s dream tool. They don't have to prove anything. They simply have to point, screech “Witch!” and their enemy disappears like in that bizarro universe Star Trekepisode where Spock had a beard.

But it has become clear that we are not accepting this, because to accept this is to accept our own submission to these goofs in perpetuity. At first, the response was anecdotal. Hugh Hewitt had a bunch of women callers dial in, all of them irate, in what he described to me as an unprecedented “avalanche.” I personally got emails from center right folks, Normals, who do not like politics. In fact, they hate politics. But now they are paying attention. And they are mad. Every man knows he has a bull's-eye on his back. Every woman knows her husband, brother, or son could be next. These people aren't afraid of men being held accountable for things they did, but of false accusations that liberals would strip them of their ability to defend themselves against.

The attempted human sacrifice of Brett Kavanaugh on the altar of unrestricted abortion is too much for them. And now the polls are making it clear that that they are angry, ticked off, and ready to low crawl over jagged glass shards to vote against the Democrats who instigated this atrocity.

Sure, anecdotes are tricky. But the polls are less so. Heidi Heitkamp is gone. She's toast. Claire McCaskill, toast. That goofy guy in Indiana, looking bad. Manchin? He knows what time it is, so he might weasel through.

We are not going to forget what happened here. And this is going to have a lasting impact, but not one the Democrats are going to like. As my friend, the fabulous Larry O'Connor, observes, Andrew Brietbart was radicalized by the Clarence Thomas hearings and the manifest injustice that this brave man endured at the hands of lying, hypocritical Democrats like noted aquatic Oldsmobile operator Ted Glug Glug Vroom Vroom Kennedy.

Hey Dems, we’re woke, and your go-to tactic of destroying our people? Broke.

See ya next month.

My new book Militant Normals: How Regular Americans Are Rebelling Against the Elite to Reclaim Our Democracy is out there now, unleashed, untamed and uncensored. Check it out.