Millennial Socialism: Stupid, Evil, or Both?

Kurt Schlichter
|
Posted: Jul 30, 2018 12:01 AM
Share   Tweet
The opinions expressed by columnists are their own and do not necessarily represent the views of Townhall.com. 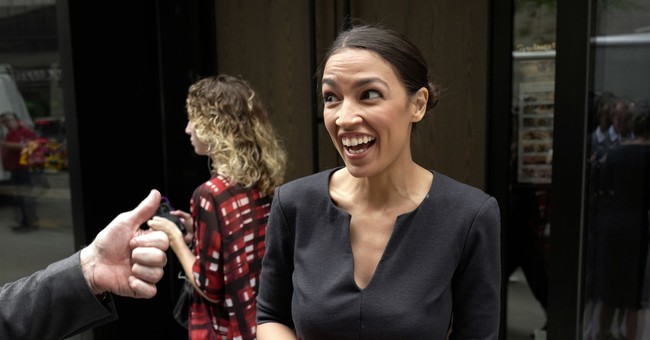 Congratulations, oh most insufferable of generations – against all odds and confounding the experts, you have still somehow managed to make yourselves even more annoying. Apparently, the hep new jive among your tiresome cohort is “Democratic Socialism,” resurrecting a poisonous nineteenth-century political death cult and putting a kicky new spin on it to make it palatable for the suckers. It’s the political equivalent of hipsters who insist vinyl records are superior because they didn’t grow up forced to crank their tunes on that miserable format.

The “Democratic” part is some cunning rebranding. Just stick “Democratic” in front of something awful and it’s good-to-go. “Democratic haggis”? Yummy! “Democratic herpes”? Sexy! “Democratic Nazism?” Hey, what’s the difference? National socialism, democratic socialism? It’s really just a question of who runs the camps because regardless of the particular brand of socialism, there are always camps.

That these millennial Marxoids lack personal experience with socialism does not stop them from embracing it. After all, socialism’s biggest fans are always the people who aren’t trapped inside it. Remember the progs who always fly down to Havana and/or Caracas to party with the local caudillo? They always fly home again.

Today's millennial socialist dilettantes might consider consulting with some of us who have personal experience with this ideological cancer, but millennials tend to prefer to rely upon their arbitrary feelz rather than on boring old facts, evidence, and history.

What the boring old facts, evidence, and history demonstrate, beyond any rational dispute, is that socialism is a bloodstained abomination with north of 100 million corpses to its accursed credit. The It Girl of the current commie/Democrat daisy chain, wide-eyed half-wit Alexandra Ocasio-Cortez, doesn’t let bourgeois concepts like “knowing things” stop her from sharing her sophomore-grade insights all over the left-wing media, which is to say “the media.” Gulag Barbie is a clown, and even the late nite hack hosts stare back at her adolescent babbling, amazed as she tosses an incoherent word salad about her workers’ paradise.

By the way, that’s satire (Def: “trenchant wit, irony, or sarcasm used to expose and discredit vice or folly”) in case you are, like her, too dumb to tell.

No one loves socialism quite like a moron who has never experienced it firsthand. No one hates it like someone who has seen it up close. I walked around in its ruins overseas; it’s an abattoir. My wife escaped it, though her granddad didn’t – he rotted in Castro’s prisons for nearly two decades because he refused to play ball with the reds. Then he died. Oh well, gotta break a few eggs to create a paradise where somebody else pays for your college, right?

Just remember that you are an egg.

The free stuff thing is a really big part of what today’s “Democratic Socialism” is –getting the leftist government to send people with guns to take the stuff you’ve worked for and give it to the people who like socialism.

Free college? Well, free for the people who vote for the democratic socialists.

Free healthcare? Well, free for the people who vote for the democratic socialists.

Free whatever they decide they want for free next? Well, free for…you get the idea.

Three guesses as to who gets stuck with the check for all this free stuff, because someone always gets stuck with the check because there is no such thing as free stuff. All those millennial mommies who read their theybies that insufferably stupid kiddie book The Giving Tree implanted the dual notions of entitlement and economic illiteracy into their useless spawn. The promise of socialism is that someone else will do the toiling – and that someone is always the people who reject socialism.

You guessed right! It's normal Americans once again, the draft horses of America, who will be expected to carry their own weight as well as the weight of all the cool kidz in Brooklyn and ‘Frisco. But as my upcoming book Militant Normals: How Regular Americans Are Rebelling Against the Elite to Reclaim Our Democracy demonstrates in vicious and hilarious detail, Normals are getting tired of snobs who disrespect and despise them while simultaneously expecting them to maintain, feed, fuel, and defend this country all by themselves.

The socialist cheerleaders don’t want to be normal. Normality requires work. They want to be part of an elite that will run things from their progressive urban coastal enclaves, and in socialism there's always a lot of running things going on. But they always assume that once the revolution comes, they will be the ones running things, clothed in government authority and making all the economic decisions that individuals and their companies make today. None of them imagine they will be the ones stuck with the dirty jobs – they dream of being commissars, not garbagemen.

SJWism is perfect training for the aspiring cog in the totalitarian oppression machine – policing campuses for forbidden thought teaches them the skills they can put into action policing society for forbidden thought. I wrote about what these wannabe Bolsheviks will do if they aren’t stopped in my novels People’s Republic and Indian Country, which depict both the nightmarish world they seek to create and the proper response to tyranny by American patriots.

Spoiler: All Normal American citizens should take advantage of their First and Second Amendment rights to act to prevent leftist tyranny – at least, until some majority of leftist judges decides that the rights of free speech, a free press, and to keep and bear arms don’t actually exist just because they are there in the text, but the right to force others to give you free stuff and to “pronoun justice” do exist because of penumbras and emanations and reasons.

Now, democratic socialists will always deny that getting on the pathway to tyranny will lead to tyranny, and they will always tell you that true socialism has never been achieved. Basically, their argument is that we should throw out the ideology that brought the world the freest and most prosperous country in human history and instead give an ideology that has failed every single time it's been attempted yet another shot because they are tired of paying for the things they want.

This is not a compelling argument for Normals, who have enough life experience to realize that things that fail every single time they are tried are certain to fail again.

Socialism’s perfect record of failure, misery, and slaughter is kind of a problem for them, so they pivot and distract, playing an ideological shell game by claiming that what they really want isn’t socialism. Why, they just to be more like Canada! This, of course, begs the question of why they call themselves “socialists” if they don't want socialism. But Normals are woke; they prefer their freedom and abundant toilet paper. They know that the current socialist fad is a lie, because socialism is built on lies. The democratic socialists keep promising Denmark and Norway, and but they always deliver Cuba and Venezuela.