Kurt Schlichter
|
Posted: Jul 23, 2018 12:01 AM
Share   Tweet
The opinions expressed by columnists are their own and do not necessarily represent the views of Townhall.com. 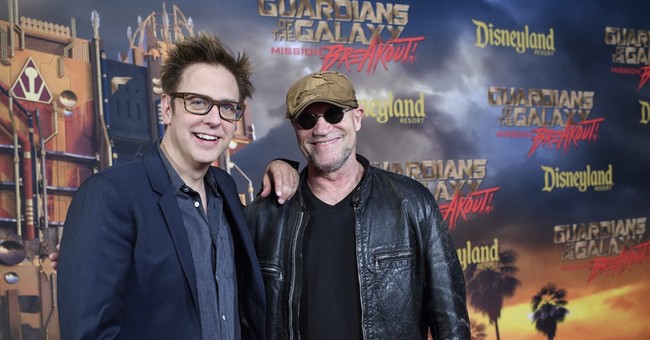 We are not better than that, and this is who we are. We’re fighting back, no matter how much and how shrilly the Fredocons complain. We’re Normal Americans and we’re done being the guests of honor at the liberals’ witch burnings.

Case in point, one James Gunn. He’s a tiresome lefty jerk who jumped on Twitter to cheer Rosanne’s recent defenestration by the SJW mob. Except it turns out he had a whole bunch of icky tweets from a decade ago lurking on the Interwebs, and some conservatives dug them up. Oops. He just had his pointy head stuck on a figurative pike and I just don’t care.

Not even a little. Not anymore.

Cultural war is hell, and I propose it be hell first and foremost on the liberals who started it.

I want people to be able to say what they want. I think it’s an awful idea to persecute folks for saying controversial stuff. I want people to not do that. But here’s the catch – I want all people not to do that, not just us conservatives.

Except I’ve been outvoted by people like the aforementioned James Gunn. He likes the idea of persecuting people for what they say. Well, he liked it. Now that he’s no longer directing the next space raccoon movie, he probably likes it a lot less. Weird how that works out. Yeah, the Lottery is loads of fun until you draw the slip of paper with the black spot.

See, we tried reasoning with the social fascists. We tried pointing out that free speech and an open exchange of ideas are vital to a society that values liberty. But it turns out that they don’t value liberty. They value power. Their own power.

All this SJW baloney is just a power grab by jerks, hustlers, and weirdos who would otherwise be powerless. In a sane society, some dude in a tutu insisting we address xir by xis pronouns would be a curiosity who we would politely ignore. But for some reason, our pathetic elite decided to take these people seriously instead of gently patting them on their noggins and sending them on their way.

A lot of it has to do with the moral bankruptcy, intellectual failure, and general exhaustion of Western society’s elite. It not only lost the ability but the will to defend itself from the barbarians, both the literal ones and the figurative cultural ones. Better men and women bequeathed today’s elite what is as close to paradise as humanity has ever achieved, and their heirs turned out to be bums. Building our civilization was hard – those exertions built character in the elite. But like lay-about kids of self-made men, today’s elite didn’t work for what it has. Instead of understanding that holding onto our culture demands discipline, effort, and courage, it pretends that it holds its position because of some sort of divine right. Except inside, today’s elite knows that it is unworthy. And that makes it susceptible to all sorts of silliness.

Normal Americans know that the only proper response to someone with green hair and a nose ring screaming that the male gaze is LITERALLY VIOLENCE and we need to stop having swimsuit competitions in beauty contests is barely controlled laughter. But the elite takes these dorks seriously – “Why yes, it seems like a really good idea to minimize the hot women aspects of our beauty contest because some misfits and malcontents who are – well – unlikely to ever be competitors, and who never watched before and will not in the future no matter what we do, have complained.”

Wokeness is like a suicide pact among the elite. “Hey, this lady has the number one show in America but she said something. And this guy has made billions for us with his movies, but he also said something. Let’s ruin them because some people with Twitter accounts complained.”

And individuals submit too. Mark Duplass says something remotely not hateful about Ben Shapiro and the SJW mob descends on the guy for being insufficiently enraged. Then the guy grovels and begs forgiveness. It’s embarrassing – next time, try acting like a man.

How about telling the complainers to pound sand?

How about saying “No”?

How about explaining “We get that you don’t like beauty contests and we don’t care. We’re going to celebrate hot women in skimpy clothes because men really like it and if you don’t, too bad. And a word of advice – lose the eyebrow stud and try a little make-up. Then guys might like you and you might not be so lonely and bitter”?

The elite won’t stop it, so it again falls to the Normals to solve the problem. We’re fighting back. No more free passes. No more high road taking – which is often just a way to avoid conflict. No more Mr. Nice Cons.

We owe them no respect.

We owe them no obedience.

They are not our moral superiors.

If they come for us, we come back for two of them.

The New Rules are stupid, but they are the rules, and the only way the Old Rules can come back is if everyone agrees to them. And that requires we deal the pain.

Right now, social justice fascism is just too valuable to them to just abandon. It works. It lets those who rightfully would have no power exploit the stupid and weak elite to exercise unearned authority. These goose-stepping aspiring Red Guards got a taste of power and they like it. And they are bad people. They have to be stopped, here and now. My novels People’s Republic and Indian Country depict the world they would make if they ever took real power. It’s not a nice world.

We can only deter them by making mobism unattractive, which we can do by raising the price for their shenanigans. And the figurative heads of liberals figuratively decapitated by their own New Rules is legal tender.

Call it the “Poison Gas” theory. In World War I, everyone used poison gas on the battlefield. In World War II, no one did. Why? Because everyone was too scared to after seeing what happened the last time.

Did you notice how the whole #MeToo thing faded away? Is it because of all the scumbags and slimeballs in Hollywood and the media who got outed? Nah. It’s because the campaign, which was designed in large part as a flanking attack on Donald Trump, ended up taking out too many liberals. They won’t tell you they stopped, but they have. The price got too high, so they quit taking scalps.

Any time you libs want to go back to the Old Rules, great. You got it. Count me in. But there’s no unilateral disarmament in the cards. You don’t get to win. Your best case is we all go down.

Mutually assured destruction works, but it only works if it’s mutual. So, we shouldn’t stop. We should ramp it up, as unseemly and distasteful as it might be under normal circumstances. But these are not normal circumstances. And Normal Americans get that. As my upcoming book Militant Normals: How Regular Americans Are Rebelling Against the Elite to Reclaim Our Democracy demonstrates, in-depth and using raw language unavailable here, Normals are ready to fight.

We didn’t ask for this cultural war. We don’t want it. But we are done taking a ration of garbage from these creeps.