Not Being A Wimp Works

Kurt Schlichter
|
Posted: May 03, 2018 12:01 AM
Share   Tweet
The opinions expressed by columnists are their own and do not necessarily represent the views of Townhall.com. 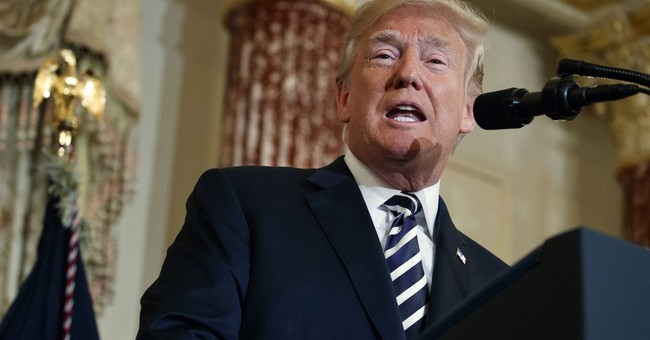 Maybe Kim Il Whatever won’t denuclearize, but then again the roly-poly dictator has seemed to come around to our way of thinking. Maybe it’s the lingering awesomeness of Barack Obama that led him to acts of unprecedented good behavior. Maybe it’s just that he’s decided to be a nice guy. Or maybe it’s because, under Donald Trump, the United States stopped acting like a simpering wuss.

Wusses and wimps…why, those are playground words, unfit for a discussion of foreign relations and international diplomacy! Except that’s entirely wrong. Human nature plays out in the playgrounds – the lessons taught by run-ins with bullies and fisticuffs under the jungle gym are, in many ways, far more important than the hoary discourses about “realism” and “soft power” taught in the very best schools and think tanks.

If someone gets in your face, and you break their nose, they don’t get in your face anymore. You don’t need to go to Georgetown to learn that. In fact, going to Georgetown is more likely to make you unlearn what is the most important lesson of all.

Power means being able to make other people do things they don’t want to do by hurting them if they refuse. That’s reality.

Our bestest and brightest are often taught the DIME paradigm – that the components of national power are Diplomatic (talking and cajoling), Information (messaging and propaganda), Military (boom!) and Economic (writing a check). DIE is okay, but DIE is what you will do if you don’t have a powerful M.

But they didn’t put M third merely because putting it first would screw up the acronym. Our transnational elite does not want to acknowledge the indisputable fact that, at the end of the day, the guy who can kill you and is willing to do so is going to win. Power is an infantryman standing on a piece of ground owning it – and the ability to keep him there. Sure, terrorists can pull off a one-time strike, but they can’t hold ground. Just ask ISIS. You’ll need a medium though, because they tried to hold ground and they all died.

America has power. But for too long our enemies dealt with a president they didn’t believe had the guts to assert it to defend American interests.

Oh, the elitists who used to control our foreign policy are not anti-war. They are just anti- any war that serves American interests. We can get into a fight in Libya, with all the attendant appalling consequences from Benghazi to the flood of refugees, but only because they know that doing so will do nothing to help our own country. That way, their collective conscience is clear. In their minds, the only good war is one where Americans die for nothing.

Tribe A wants to kill Tribe B is Whoknowswhereisstan? Let’s send a bunch of red staters over to referee that conflict while our non-gendered child Kaden takes a gap year finding xeself in Tibet. But a bunch of mullahs high on their seventh century apocalyptic garbage want to nuke us and our allies? Better deploy some pallets of cash because we shouldn’t ever fight for something as mundane as keeping these creeps from dropping a hot rock on the homeland.

Donald Trump has his priorities straight. He has resurrected and embodied the Jacksonian model that fell out of fashion with the foreign policy establishment but not with the folks expected to pick up rifles and deploy. Andrew Jackson, who Democrats used to appreciate back when they represented the Normals who go fight our wars – their new preferred constituencies of fussy SJWs and virtue-signaling hipsters would never be caught dead in uniform – was not afraid of righteous conflict. Nor are most Americans. Remember the Alamo! Remember Pearl Harbor! Never forget 9/11! You SOBs might get one punch in, but then Americans are going to get up, brush off, and kill you all.

You see, Americans are happy to fight if they get a good answer to the perfectly reasonable question that the foreign policy elite hates: “Why is this particular war worth me or my kid’s life and a whole bunch of our money?”

Americans love to fight – when there’s a reason. They just don’t love to fight when there’s no reason, like when our betters don’t think that the war they got us into is actually worth winning. America’s will was never broken by the Vietnam War; the people sending their sons over there just figured out our elite didn’t have the stomach to win and said, “Well, then the hell with it.” They are done dumping the bodies of non-elite young people into a meat grinder thought up by a bunch of cruise-shilling Fredocons, leftist academics, and failed novelists ready to spill other people’s blood solving hashtag-ready crises.

Trump gets it, and of course he does. He’d never get fleeced like Obama did by Iran, and he will end that deadly charade. See, Trump grew up in the smashmouth world of New York real estate, not in some milquetoast academic oasis where competition is considered tacky and Americans interests are secondary to liberal ideology in the eyes of the citizens of the world in charge.

That’s why foreign policy liberals get rolled. They imagine our enemies are as weak, feckless, and afraid as they are. Trump and Kim Jong License to Ill understand each other, not because they are moral equivalents – our morally bankrupt elite believes that – but because for good to prevail it needs to be ready, willing, and able to kick evil’s butt.

Trump has apparently made the simple, crude, and utterly obvious play by leveraging American military power to force the North Koreans to the table. Sure, there is diplomatic pressure via China, information operations designed to destabilize the regime, and promises of money to allies, but at the end of the day, it’s our military that gives our enemy pause. Trump’s vision and his intent are absolutely clear – conform, or the United States will kill you and flatten your crappy little country. Fire up that séance to ask ISIS how defying a Mattis-powered U.S. military works out, Fat Boy.

And the dictator appears to be conforming. Without a shot fired.

There’s a lesson there. It’s a lesson that was never learned by our betters like Ben Rhodes and Susan Rice and all the other bloody-handed fools who managed to hobble the most powerful nation on earth for nearly a decade at the cost of hundreds of thousands of American and foreign lives. The United States is powerful because it is strong, but only when it is ready, willing, and able to use that power to serve America’s interests. The world saw Barack Obama was weak, feckless and afraid. It sees that Donald Trump is none of those things, so it fears him.

And because of that, we may well have peace.