Kurt Schlichter
|
Posted: Apr 23, 2018 12:01 AM
Share   Tweet
The opinions expressed by columnists are their own and do not necessarily represent the views of Townhall.com. 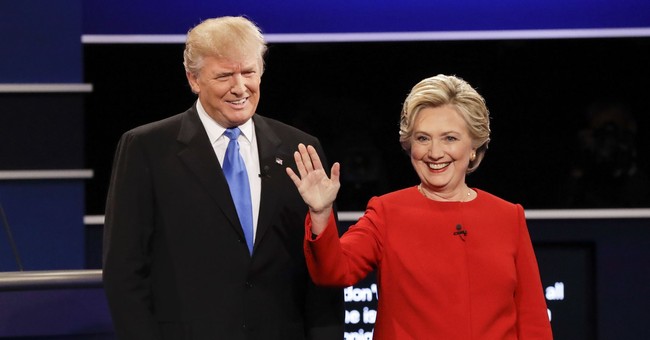 Face it: Hillary Clinton will never be Playmate of the Year. We know this because apparently only a former Playmate of the Year can finally be the one to take down Donald Trump and The Smartest Woman Ever™ was demonstrably unable to make that happen. This latest deus ex mockable solution to the problem of America electing a guy the elite disapproves of, convincing America to somehow turn on its President because a decade ago he engaged in in real life what hordes of creepy shut-ins engaged in in their own minds, is simply hilarious.

Trump hooked up with a Playboy Playmate! That’s the last straw!

Whatever. The only danger Hottiegate poses to The Donald is carpal tunnel syndrome from thousands of high fives.

So, whatever the lucky Playboy Playmate’s name is joins Stormy Daniels, Pocahontas, not being nice enough to John McCain, telling the truth about illegal aliens, saying “schlonged,” having Russian dressing on his salad, and a thousand other forgotten “WE HAVE YOU NOW!” news cycle topics, on the endless list of WORST THINGS EVER! that were supposed to finally purge the scourge that is Donald Trump.

You liberals and your Fredocon lackeys need to get this through your heads. You are not purging this guy. He’s purging you. Just look at James Comey, who has gone from Tower of Integrity to Looming Doofus. The winding trail from the bottom of that famous escalator to right here and now is littered with the twitching bodies of those who thought they could take on The Donald and win.

And it’s a delight to watch you hacks go nuts about it.

Warning: When Trump denuclearizes North Korea and gets a peace treaty signed, everybody put on ponchos because the haters’ heads are going to explode. In the words of the late, great Marine R. Lee Ermey, it’s going to look like a “modern art masterpiece.”

Speaking of messes, there’s the Democratic National Committee lawsuit against the Trump campaign, the Russians and the reverse vampires accusing them all of Conspiracy to Win an Election While Not Being a Democrat. Apparently, these geniuses forgot that discovery goes both ways, but Trump didn’t. He tweeted “This can be good news in that we will now counter for the DNC Server that they refused to give to the FBI, the Debbie Wasserman Schultz Servers and Documents held by the Pakistani mystery man and Clinton Emails.” Look for this nonsense to be quietly withdrawn in a couple weeks when the defendants forgo a motion to dismiss and serve up a bunch of document demands and deposition notices to everyone in the Democrat Party from Hillary down to the two guys assigned to fan her with palm fronds and make sure her Chardonnay glass never runs dry.

Oh wait! Maybe Michael Cohen will roll over on Donald Trump! Yeah, right. Let’s put aside the fact that there is nothing on Trump – after two years of trying to find something, sad basset hound-looking liberal catspaw Robert Mueller hasn’t leaked anything showing collusion, indicating there isn’t anything. But let’s assume Michael Cohen holds the keys to supervillain Donald Trump’s volcano lair. Why would he spill to Mueller’s pack of Democrat donors? If Trump’s so evil, Trump will totally pardon him, right? Michael Cohen would have that in his pocket, so the only thing the Deep State Dozen would get out of him was a lingering glimpse of his middle finger.

The same with Michael Flynn, who Trump should pardon if his coerced guilty plea is not tossed out. And he should pardon the whole Flynn family to protect them from being framed too. At the end of the day, Trump has the power to pardon all the people Mueller targets, and you know he totally will. Impeachment? Nah. Trump is safe. Though his enemies would riskbreaking the country apart and even actual conflict for the short-term advantage of overthrowing the rightfully elected president,there are not enough GOP Senate sissies like Jeff Flake who will ever be willing to vote to convict.

It’s got to frustrate liberals and their Never Trump buddies to know that they are never deposing our elected chief executive. Nor are they ever putting any of these innocent people in jail, and that means the Deep Staters can’t effectively intimidate them into giving false testimony, sadly something the feds have shown themselves willing to do again and again to convict people they dislike.

This whole campaign to undo the 2016 election is a scam and a fraud and we all know it, but unlike the principled Decorumcons who refuse to see the truth of the putrid corruption within their beloved Beltway, Donald Trump (and those of us who support him) feel absolutely no obligation to go along with the charade that this isn’t a corrupt, slow-walking coup pushed by a disgruntled establishment. Our “system” is not endangered by us calling out the lies, or by the President using his power to prevent and/or correct manifest injustices. The danger is the corruption.

George W. Bush should have been man enough to pardon Scooter Libby, but he was not. He was unable to summon the courage to confront the establishment and reject the system that convicted Libby of a crime because Libby would not lie about Dick Cheney. But President Trump was not afraid. He feels no need to pretend that the Department of Justice under Zombie Jeff Sessions is in the justice business, and his Libby pardon was a powerful message to potential victims of liberal prosecutors that they will not be abandoned if they refuse to lie on command about the targets of the Deep State’s wrath.

Contrast that with the situation faced by Andrew McCabe, who now lives under a bus where his former pal Shady James Comey threw him. He’s going to get prosecuted and there’s no pardon for him at the end of that rainbow. See, the thing is he knows he’s hanging out there alone. He knows that no one will help him. And he knows he’s actually guilty of something. All that makes for a very chatty Andy.

He’s an ex-cop and a pretty one at that, so prison’s not going to be much fun. If anyone will spill the beans – and McCabe knows where all the beans are planted – then the smart money is on him. Just think of the agony on the MSNBC panels when McCabe starts talking about the conspiracy to exonerate Felonia Milhous von Pantsuit and the plot to frame the President. He’s got nothing to lose, and flipping on his Deep State crew is now his only way out.

Pity the poor liberals and their cruise-shilling Never Trump minions. It’s going to be hilarious when their scheme to bring down the President brings them down instead.