Kurt Schlichter
|
Posted: Feb 26, 2018 12:01 AM
Share   Tweet
The opinions expressed by columnists are their own and do not necessarily represent the views of Townhall.com. 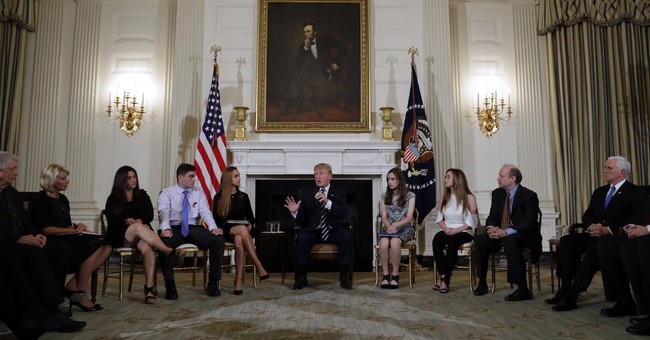 We’re now supposed to give up our guns because it's the 21st Century, people, and the cops will totally protect us and oh, you can’t dare criticize the FBI for failing to disarm yet another ticking time bomb and what kind of crazy nut would expect a police officer to actually confront a gunman?

Show of hands: Who thinks this stops, even slows down, once those mean old not-actually-assault weapons get banned? That liberals have taken a hard stand in favor of cowardice does not exactly fill one with confidence that once we give up our Second Amendment rights that we’ll be safer or freer.

I guess we both have blood on our hands for having this chat - the real heroes are Sheriff Israel and the Broward Cowards. Because of the children or something.

But at CPAC, the president was super clear - he is not wavering on the Second Amendment. Sure, gooey puff boys like Marco Rubio are eager to roll over and show belly, but a hard line on our rights is not going anywhere. Hey Little Marco, this is the Republican Party, not the Foam Party.

Rubio, displaying the political savvy that convinced him to don a studded leather collar and be led around on a leash by Chuck Schumer, talked Congressman Brian Mast into rolling too. Suckers. The New York Times was delighted that Mast agreed to commit career suicide by sticking his constituents in the back when he tried to leverage his being a vet into somehow qualifying him to tell everyone else what their rights are. Amazing, but those of us vets who don’t dance to the libs’ tune never seem to get a Golden Ticket to the NYT op-ed page.

These gullible outliers don’t change the fact that the rest of the GOP is solid. That’s why the left is changing the rules and trashing our norms to do what they can’t do politically through intimidation. They have cultural power and we don’t, and they now seek to use businesses to destroy our rights and silence our voices. Understand that they don’t want an argument or a conversation - they want to use their non-governmental cultural power to deny us access to a platform so that we are unable to make our views heard. We need to recognize this dangerous trend and counterattack ruthlessly with our political power.

Conservatism is not a suicide pact, and our principles are not a mandate to unilaterally disarm. We need to make them hate the new rules. Maybe they won't learn anything, but at least they won't win by cheating.

The liberal elite is using its social and cultural ties to those at the helm of big companies to essentially blacklist the NRA, and thereby the tens of millions of Americans who support gun rights. But oppression is oppression whether it’s done by a government bureaucrat or a corporate one, and our principle of non-interference in business assumes business stays out of politics. But now National, Hertz, and others are cutting ties to the NRA, and liberals are advocating banks do the same. Their intent is clear – what they can't do in politics they will simply do by not allowing the representatives of people whose politics they don't like access to the infrastructure of society. And we're not supposed to do anything about it because, you know, free enterprise and stuff.  You know, our principles.

No. They are exercising political power. We have our own political power, and we need to exercise it - ruthlessly. The first step is an executive order at the federal level directing that no federal contract can go to any company that discriminates against an organization based on its advocacy or exercise of an enumerated constitutional right. We wouldn't allow a company to do business with our federal government if it discriminated on other grounds, so why should we do it discriminate on political grounds? Why should taxpayers be subsidizing people who hate them? When those government employees start walking past the Hertz and National counters, the liberal jerks who run those companies are going to find that they're posing and posturing has a price.

Next, Congress needs to pass a comprehensive non-discrimination regime designed to protect us into law and allow individuals and entities the right to sue any business that discriminates on the basis of the advocacy for exercise of any constitutional right. We need to make sure there are huge penalties for non-compliance – how about $1 million a day? We also need attorneys’ fees provisions for the plaintiffs as well, because we want to turn lawyers into bounty hunters seeking out these posers who are doing so much damage to our society by collaborating in the suppression of speech that the elite does not approve of.

We could call it the “Civil Rights Anti-Discrimination Act” and dare the Democrats to vote against it. Now, of course, due to the filibuster, it might be tough to pass a law protecting our rights through Congress, but we own about 30 legislatures. That's 30 states that can each outlaw this kind of discrimination within their borders. So Hertz and National, welcome to a whole bunch of lawsuits in Texas and Wyoming and elsewhere. But hey, it's worth it because of the children, right?

The liberals are also pushing venues like Amazon and Roku to drop NRA News - to actively censor a news outlet because they don't like its agenda (I appear regularly on it). The difference between government censorship and corporate censorship is no difference at all. Again, the federal government and the states have the power to regulate. Once again, we must ban discrimination on the basis of advocacy for or exercise of constitutional rights, and empower individual plaintiffs to seek penalties and attorneys’ fees for violations. If these companies really believe what they're doing is right, they can hire lawyers in 30 states.

Right now, none of this posturing has a price tag, but this private sector oppression is devastating to our political system. Anyone who thinks that this tactic will stop once guns are banned is kidding himself. We will no more accept submission to a bunch of companies than we will the government.

Now, this all doesn't sound very conservative does it? Well, that's the response Democrats are counting on, that we will pretend the old rules still apply while they're jamming us with the new ones. These attacks are a fundamental assault on the liberty of normal Americans. We need to recognize them for what they are, and we need to exercise our own political power to defeat this attack on our ability to participate in our own governance. Bake us a cake, jerks. We warned you – you are going to hate the new rules.