Christmas Is the Perfect Time to Mock Liberals, and Other Random Thoughts

Kurt Schlichter
|
Posted: Dec 25, 2017 12:01 AM
Share   Tweet
The opinions expressed by columnists are their own and do not necessarily represent the views of Townhall.com. 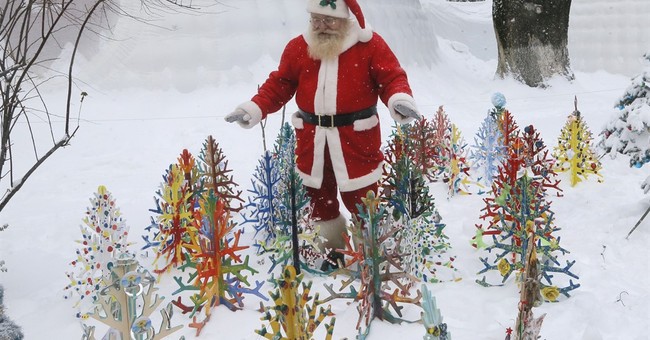 When we gather together this Christmas, it’s going to be super-awkward since everybody is dead because Donald Trump pulled out of the Paris Climate Scam, repealed net neutrality, and cut taxes. The depredations of Genghis Khan, the Black Plague, and the repeal of the Obamacare mandate – these are pretty much the same thing. Santa Claus and all of our dreams are dead too.

On the plus side, since we are all dead there’s no one to make egg nog, which is the worst of all possible nogs.

“You know what these eggs need? Some milk. And then rum.”

No. Whoever invented egg nog is the second grossest human being ever who is not Lena Dunham, exceeded in grossness only by the first person being who thought, “Look, an oyster! I know. I’ll put that slimy thing in my mouth.”

The Democrats are the egg nog of American politics. Discuss.

Santa stuffed coal into the Democrats’ fishnet stockings this year, as well as all sorts of other fossil fuels. The President turned on the Keystone pipeline, unleashed our miners, and told the environmentalist whiners to go frack themselves. Growing up near San Francisco, a town memorably described by (I believe) comedian Bobby Slayton as “The city that makes its own gravy,” I got used to goateed, over-tatted progressive doofuses who imagined that the electricity that powered their iPads and automatic bongs came from magical windmills that didn’t ever dice n’ slice bald eagles. Of course, chopping up symbols of U.S. strength would probably be a plus in their beady, bloodshot eyes.

But the point is that liberals were never really about “clean power” – they were about outsourcing the dirty messy icky work of generating power to those lesser mortals out there in Real America. That is, until they realized that those lesser mortals out there in Real America were happy and prospering thanks to the energy industry, and we sure can’t have red staters being happy and prosperous. Heck, if you work and support yourself, you don’t need coastal liberals’ largesse, guidance, and control. Hence their hatred of fossil fuels, which is really their hatred of normal Americans. The progressives try to disguise the fact that environmentalism is really just a way to stick it to the red rubes by wrapping their carbonophobia in the sacred doctrines of their Weird Weather Cult.

Yeah, 2017 has been a terrible year for Gaia. But she struck back with hurricanes and fires, which are totally the result of global warming. Of course, the recent run of years where there were no big hurricanes or fires were not indicative of a lack of global warming because you hate science, or something.

And 2017 has also been a bad year for the entertainment wing of the Democrat Party, Hollywood. Remember movies, those fun things you would see for a few bucks in the theater? I saw Star Wars: Damn, Have They Aged Badly the other day – don’t worry, there will be no spoilers because I don’t really remember it. After tickets, popcorn, and my Bombay Sapphire and tonic – do you really think I’m going to watch Spock and the space orc knights use laser swords to battle characters with names like “Snorke” and “Zuub Chudloogie” without a stiff belt? – this exercise in mediocrity cost me about $100. Look, the movie didn’t retroactively ruin my childhood, as so many internet nerds have complained. It was just kind of “Meh.” It tried to do some lib suckerpunching (as John Notle calls it), but it hit limply, like a puny Never Trumper. For example, in that screen crawl at the beginning, “THE RESISTENCE” is in all-caps. I’m guessing that’s some sort of clever Hollywood zinger at Donald Trump, which some producer probably came up with in his hot tub surrounded by moist, glistening interns.

Take that, Donald Trump. TAKE THAT!

Luckily, there’s awesome conservative action and adventure out there for normals who like their heroes red and the bad guys/gals/gender-nonconforming beings blue. But if you dig lib propaganda, there’s a new Steven Spielberg movie about – really – how the Washington Post was heroic for publishing classified military documents fifty years ago. Last spring, libs were having a collective self-wetting because The Donald allegedly let slip “highly classified” info to some Russian guy during a meeting – it’s probably tough to recall this particular THIS IS THE WORST THING TRUMP EVER DID! freakoutrage among all the hundreds of other THIS IS THE WORST THING TRUMP EVER DID! freakoutrages – and now these same libs are going to give a bushel-full of Oscars to a movie about the WaPo doing just that. BTW, if you love irony, follow that link back to see the name of the news organization with its journopanties in a bunch about Trump disclosing “highly classified” info.

Hypocrisy, thy name is liberal.

Oh, this movie stars Meryl Streep, the same woman who led the standing ovation for Roman Polanski and covered for Harvey Weinstein and who came out at one of those festivals of movie industry onanism to chide President Trump for his moral shortcomings. Well, she’d know about moral shortcomings. Meryl’s Choice was her career.

And speaking of hypocritical weasels, the Democrats wisely declined their progressive wing’s demand to use the DACA fight to restage the Alamo, probably because this time the Americans would have won. Instead, they kicked the budget can down the road to January and fled town, not particularly wanting to compound their stinging defeat on tax reform with one on illegal aliens. Yeah, a government shutdown over the holidays because the Democrats won’t play unless Republicans let a couple million illegal aliens become citizens is a bad visual. Around the Christmas table, even that annoying sophomore nephew who is home from Gumbo State for Kwanzaa will kind of have a problem arguing, “But we should totally cut off vital services for Americans in order to let MS-13 members be rewarded with our precious citizenship!”

Now, as your late family gathers together, all dead because of Trump’s authoritarian reign of terror, try to remember that in the spirit of the season, you should mock your liberal friends and family unmercifully. It’s a painful time for them. The economy is booming, ISIS has been beheaded, and Mueller hasn’t found Schiff. That’s why it’s so, so very important to kick them when they are down. Because Christmas is a time where we celebrate giving, so give them grief. Because it’s the only way they’ll ever learn.