Kurt Schlichter
|
Posted: Nov 20, 2017 12:01 AM
Share   Tweet
The opinions expressed by columnists are their own and do not necessarily represent the views of Townhall.com. 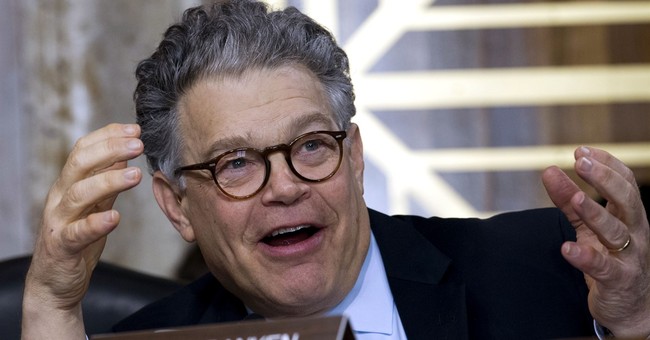 Some say that it’s so, so very wrong to take so much pleasure at a scandal in which the heroes of the Democrat Party are all being exposed as handsy, tonguey creeps. But if it’s wrong to laugh at the hilarious comeuppance these hypocrites are suffering, I don’t want to be right. In fact, I want to be super-mega-hyper wrong.

Liberals have always been a bunch of lying posers pretending to be allies of women, and some of us always knew it was a scam. To see the truth so gloriously revealed, and to watch their humiliating back-pedaling and equivocation, is wonderful. Get-me-a-cigarette-and-a-cuddle wonderful.

Sure, we have an issue of our own, but is it unfair to point out that Judge Jailbait was a Democrat back when he was cruising malls for teen action? Yeah, it’s probably unfair. Too bad. Own your perversions, Party of the Wandering Hands.

Roy Moore is a problem, but he’s just one problem. It’s probably easier to list all the Democrats who we haven’t recently found are positively Weinsteinian. Noted Clinton supporter Anthony Wiener was super-close to Chuck Schumer, who’s got to spend every moment he’s not lying about tax reform wondering which Democrat bigwig is going to be exposed as the next fern defiler. Thanks to his youth-oriented tendencies, Weiner just started an exciting new career in license plate fabrication. At least he’ll have some terrific reading during what he hopes are those lonely minutes right before lights out.

Senator Richard Blumenthal (D-Saigon) was accused of grabbing a woman 40 years ago, which might be false, so he’s lucky he’s not at some college facing the kangaroo court rules his party imposed. Anyway, he’s got an ironclad alibi – at the time he was busy earning the Medal of Honor in ‘Nam.

Then there’s Senator Bob Menendez (D-Lolita), who considers his hung jury on federal corruption charges, which included underage hooker allegations, a big victory. His slogan, when he runs for re-election, should be, “You can’t prove nothin’!”

And Senator Al Franken (D-Medellin) continued his unbroken dumbness streak by actually letting someone photograph him while he made a play for the only kind of woman who digs him, an unconscious one. That made it a bit hard to deny, though he did troop out seven women to assure us that he never harassed any of them. Of course, most of us could probably round up seven people we didn’t molest. Not Bill Clinton, but most of us.

Oh yeah, did you get the memo? Just this week, the Democrats discovered that Bill Clinton was a sex abuser. Who knew? It’s nice the liberals finally resolved the tension between their competing clichés about “We must believe the women!” and “How dare you blaspheme our priapic demigod!”  It was weird how this revelation occurred just as the Dem establishment was trying desperately to put the kibosh on Felonia von Pantsuit’s growing confidence that 2020 will finally be Her year. Gosh, if only someone had called Her out on a little watched cable news network as a sex abuse-enabling monster the last time she was running.

I guess you can only bet on the three-legged horse so many times before you figure out she’s never going to win and send her to the Jell-O factory. Noted Clinton supporter and Jell-O pitch perv Bill Cosby was unavailable for comment on advice of his lawyers.

We have yet to see if there is going to be some historical revisionism about the Lion of the Senate, Ted Kennedy (D-Atlantis), or about weather religion cultist and masseuse-tickler Al Gore. We’ll also have a chance to find out if voters will be intrigued by one Democrat’s campaign on an innovative “Vote for me! I am an unlikely sex machine!” platform.

And back in Hollywood, Pervgate continues. Recently, noted Clinton supporter (Is this a theme or what?) Lena Dunham raised her face up from the steam table long enough to claim the (very) young lady who just accused her producing pal of rape is lying. Apparently, the rule is that, “We must believe women … when they are making useful accusations.” But, don’t dismiss Lena’s insights out of hand; she’s an expert on people who make up stories about sexual assault. Don’t worry about Lena – though her unwatchable show is off the air, with her qualifications she can run always run for Senate.

In short, basically the Democrat Party is a Duke lacrosse team that actually did it.

This scandal poses some unique problems for our liberal friends. The Democrats spent decades telling women how Republicans hate them and now, well, it appears the Democrats like women, just the wrong way, and they like obtaining consent not at all. Pervgate is generating gross revelation after gross revelation, and basically America’s ladies are being asked, “Show me on the doll where the bad party touched you.”

They’re answering, “Everywhere, and also on my houseplants.”

The Democrats used to be able to exploit the fact that GOP voters actually have morals. But then the tyranny of the new rules arose and their ploy stopped working. Gloria Allred dragged out a bunch of accusers to try and get us to abandon Trump in 2016, and all she got was a “Meh.” People saw the math didn’t work.

“You are morally obligated to dump this guy based on the shaky contentions of a bunch of people a rabid liberal partisan who makes money off such accusations produced, and you must therefore vote for the woman who spent the last thirty years trashing the abused women her husband left weeping in his wake. Because patriarchy.”

Nope. No more. Republicans refused to allow their morals to be weaponized against them again, and it confounded the libs. That meant they had to rely on their candidate and their policy positions and, well, that went poorly.

See, that’s the problem with hypocrisy. It’s not merely that the idea that, “If you do it you lose, and if we do it, we still get to win,” is so galling, though it is. It’s that it can actually change the rules. The rule used to be that accused sexual abusers can’t be politicians. That stopped being the rule when the Democrats Move(d) On. So when they tried to invoke the rule in 2016, they found it was uninvokeable.

This is how you got Roy Moore, who should have arranged to be in a federal corruption trial right because then no one in the Senate would be demanding that he drop out. Alabama voters might very well choose the guy who dated babies over the one who wants to kill them, and if Moore wins, a good part of the reason will be, “The hell with you liberals.”

I keep telling them that they are going to hate the new rules.

But, of course, thanks to the giant hard left progressive faction within the Democrat Party, they have a problem. The crony centrist Clintonish contingent is perfectly happy to ignore Dem abuse of women because they don’t actually care – it is all a pose. But the prog wing has an incentive to continue to pretend to care about women because their faux outrage is a weapon they can wield in trying to win the party civil war. So now, they have Albatross Franken to deal with – some of the Democrats aren’t going to go along quietly with the usual three-act script that dictates a first act of fake concern, then a second act of fake contrition, and that climaxes with fake consequences. Franken may well be sacrificed on the altar of wokeness.

Roy Moore is a pain to the GOP for what he allegedly did back when he was a Democrat, but the Donkeys are doing all they can to neutralize the fallout. Franken and Menendez also provide the GOP with a ready-made response to all those Roy Moore ads the Democrats are slobbering to drop. Stuart Smarmy was dumb enough, and tacky enough to, doggone it, let himself get caught on film doing it. The GOP might be the Party of a Perv, but the Democrats are the Party of a Bunch of Pervs.

Here’s the thing everyone sees clearly now. The Democrats never actually believed all that stuff they shovel about women. It was a pose, a scam, a grift run on the suckers. And now, thanks to the likes of Al Franken being unable to interact successfully with women who are awake, the curtain has been thrown back. What it reveals is a pathetic collection of losers trying to leverage their positions to get a few cheap gropes.

That’s your Democrat Party. That’s who we conservatives will face in 2018. Sadly, the only people stupid enough lose to these creeps are the ones running the GOP.