GOP, Can You Hear Us Normals Now?

Kurt Schlichter
|
Posted: Sep 28, 2017 12:01 AM
Share   Tweet
The opinions expressed by columnists are their own and do not necessarily represent the views of Townhall.com. 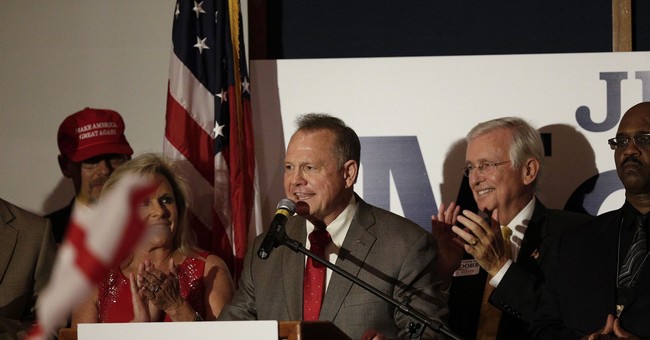 Are we finally getting through to the GOP Establishment; has the pain we militant normals have dealt it performed the vital task of being the teacher of last resort? It’s too bad that’s how the Establishment has to learn that we’re serious about nuking business as usual. We tried being nice; that was the Tea Party, and the Establishment trashed it. Welcome to moderately mean.

Don’t make us get even meaner.

Poor Luther Strange, the Collateral Damage Candidate. He’s a nice enough guy, even if his name makes him sound like he ought to be lurking in a volcano lair plotting against The Avengers. But he’s also Mitch McConnell’s guy; this was not a diss of Donald Trump (Future Column Idea: “Why Trump =/= Trumpism”). The base wanted to teach the Elderly Mutant Establishment Turtle, and those aligned with him, a lesson. So the base went with Roy Moore, who is super-colorful in a potentially Todd Akin kind of way, because Roy Moore constitutes a giant middle finger to the crowd that failed to summon up the cajones to repeal Obamacare yet found endless investigations of RUSSIA! TREASON! OK, IT’S JUST SOME ADS ON FACEBOOK BUT WE’RE STILL GOING WITH TREASON! and amnesty for middle-aged Dreamers muy simpatico.

You almost feel sorry for Mitch because he’s dealing with sanctimonious crones like Susan Collins and liars like John McCain, but then you realize that the only way he manifests his frustration at their slimy duplicity is with that pursed-lip tortoise frown of his. Do the RINOs face any consequences for defying him? Does Mitch ever play hardball with them? Who’s afraid of him? No one. They laugh at him, and he chooses to do nothing. Okay, that’s fine. If he won’t lay down the iron discipline on his apostates, we’ll just burn the heretics ourselves.

Luther Strange would have been just fine as a senator, but the people of Alabama decided he was more useful as a figurative head mounted on a figurative pike on the figurative castle gate. Sorry Luther, you’ll go down in history as a pleasant but expendable cautionary example.

But some of the ones who actually are lame are getting the message. Some of these half-steppers are already bailing out before they crash into the mountain. Did Bob Corker, the noted Iran Agreement enabler, ditch his safe Tennessee Senate seat because he needed to spend more time with his family? Was it because he believes in only serving two terms? Perhaps Chet the Unicorn recommended it? No, he saw the writing on the wall.

In Pennsylvania, House GOP squish Charlie Dent took one look at how his Trump-centric constituents voted and decided this was an opportune time to pursue other opportunities, like the opportunity not to be humiliated in the primary. He’s widely expected to be replaced by Scott Uehlinger, a veteran who is also a former CIA guy – and not the Moby McMullin kind of weaselly former CIA guy. Uehlinger’s the kind of ex-agent who’s not an insufferable, preening, moderate doofus. He’s a hardcore conservative who gets that his blue collar constituents are tired of being treated like dirt by the GOP. He’s the Establishment’s nightmare.

Uehlinger’s also a message. Roy Moore is a message. And there are more messages coming in 2018.

Are you listening? GOP, can you hear us normals now?

See, we’re serious. The ritual sacrifice of Eric Cantor was not a fluke. The election of Donald Trump was not a fluke. None of this is a fluke. We really mean it. We want change. And if you won’t give it to us, we’ll fire you and elect someone who will.

Yeah, we get the down side. That seat in Tennessee was safe and driving Corker out might put it at risk. But sometimes you gotta pull a Mel Gibson in Ransom move. We win big or lose it all; let’s roll them bones.

Primarying incumbents is a high stakes play, but hey – it’s only our country that’s at stake. We face an enemy that hates us, that wants us suppressed and silenced, that will do everything it can to take our First, Second, and every other Amendment’s rights from us and condemn us to a future of baking liberals’ cakes and fearing that we might be jailed for using the wrong pronoun. There’s a real threat to the United States continuing as we know it. We see it. Do you? If you Republicans are too weak and cowardly to fight, then we lose it all, and we know it. We’re woke – ask one of your Millennial interns what that means.

And you’re electorally expendable. You don’t need to ask anyone what that means.

If you’re not afraid for your job, you should be.

Yeah, we know the risks. But then, haven’t you proven the risks are overhyped? So we’re risking our majority? Well, a fat lot of good that’s done post-Gorsuch. The Maine Pain and the Arizona Blue Falcon have already demonstrated that their sole motivation is to nip at Trump’s ankles – their constituents and their promises be damned. And it’s pretty clear that their stepping up to defeat Obamacare’s repeal provided cover for other spineless GOP invertebrates who now get to pretend they don’t have their blades aimed squarely at our spines. You think if we get another SCOTUS pick, and if he doesn’t see those baby-killing penumbras and emanations in the Constitution, Planned Parenthood pals like that Eskimo cowpie Linda Murkowski won’t vote against confirmation?

Sure, there’s always the risk of electing a freak show; the fussy Fredocons are right about that, for once. Let’s face it – if Roy Moore doesn’t watch it, he has the potential to become a giant, nutty anchor around the GOP’s neck next year – assuming he doesn’t manage to lose the general thanks to a hitherto unknown female biological insight or some other insane-o-gaffe. If he doesn’t get that every lying media hack with a mic is going to be following him around waiting for the outrage du jour, in a few months we could well be saying about Roy Moore “Gee, I wish our problem with this guy was that he’s a witch.”

Perhaps the GOP Establishment thinks we’re crazy for taking that kind of chance. Maybe we are. But we’re doing it anyway. And you know, it’s always a bad idea to mess with crazy people.

So what’s the answer? Easy. Start doing what you promised. Don’t fool yourself into imagining that you’re going to get a free ride if you somehow can’t manage to repeal Obamacare but somehow can manage to give amnesty to a bunch of illegal aliens. You’ve got tax reform coming up – maybe you should stop listening to the wonky geebos at the American Tax Liberty Center for Liberty Tax Freedom Liberty and not screw with your own base by stripping out deductions we normals use to free up money to make Democrat constituents pay less. BTW, when is the Smarmy Dope going to put concealed carry reciprocity up for vote in the House?

Strange, Corker, and Dent are just the beginning – if this isn’t the end of your long streak o’ losing. Sure, our strategy may backfire, but what have we got to lose? If we aren’t going to get what we want, you aren’t either. Maybe that’s sub-optimal game theory, but then this isn’t a game – not for those of us who will bear the consequences of your failures. And if moderately mean doesn’t work, we’ll take it up a notch. We have nothing to lose.

GOP, can you hear us normals now?