Nuke ‘Em ‘Til They Glow

Kurt Schlichter
|
Posted: Mar 30, 2017 12:01 AM
Share   Tweet
The opinions expressed by columnists are their own and do not necessarily represent the views of Townhall.com. 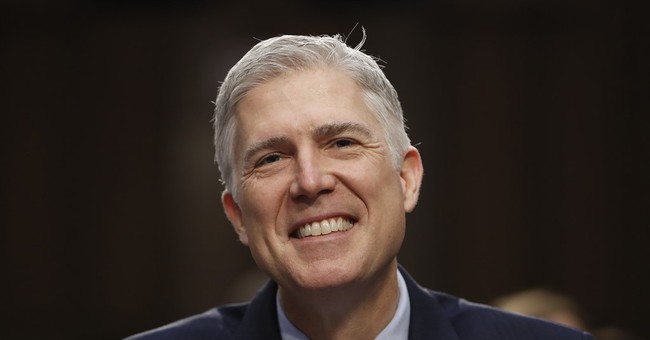 The Democrats must learn through pain, specifically the agony of watching Neil Gorsuch take the seat that they stompy-feet insist belongs to Merrick Garland. For too long, they’ve packed the bench with liberal partisans committed to exercising raw power as an end-run around democracy and the Constitution. Well, if raw power is the rule, then they need to choke on it. And we should laugh at their pain even as we amplify it via the Nuclear Option.

Thank you, Harry Reid! You'll never know how much we appreciate you taking time away from your bizarre relationship with your NordicTrack dominatrix to instigate the glorious Reid Rule and thereby surrender the one tool Chuck Schumer and his band of merry losers had to derail the oncoming train that is a yugely conservative SCOTUS. Oh Harry, your corruption and general unpleasantness make it so much sweeter knowing that you will only be remembered, if at all, for allowing Republicans to repopulate the Supreme Court with right-wing justices. Thanks to you, the liberals have squandered their best chance to fundamentally transform America from a constitutional republic into a huggy, libfascist dictatorship.

Oh yes, the Republicans must use the Nuclear Option. Nuke the site from orbit – it’s the only way to be sure that we have at least a couple decades before Chelsea, or whichever other quarter-wit dynastic Democrat cheats its way into the Oval Office, and can eliminate our First, Second, and probably Third Amendment rights. With Democrats, the only Constitutional rights that are safe are the ones that appear nowhere in the text, and it is open season on the ones that do. Except for the Fifth Amendment – Democrats love that one.

Super whatev. Chuck Schumer has a never-ending supply of dubious reasons to try to iceberg the S.S. Gorsuchtanic. But he also faces a never-ending supply of bad choices because his genital-beanied base is dumb enough to force him to push the Big Red Button on someone everyone looks at and thinks, “That Gorsuch guy looks like a judge. He’s practically a Morgan Freeman of pallor.”

The problem with too many conservatives is that some of them, mostly the ones with unironic bow ties who have never known the loving touch of a live human being, get fussy and bothered when the liberals change the rules and those terrible, unwashed conservative voters start demanding that conservatives play by the new rules too. But that's no longer a problem for us. The Senate GOP is still going to confirm Gorsuch no matter what. Even the weak sisters of the Republican Party are falling into line, like Susan Collins, Linda Murkowski, and Lindsey Graham.

That's how obnoxious the Democrats have been – they’ve even gotten the RINOs riled, and at liberals for once.

But this is more than just about the filibuster getting filibusted. If we had a political culture that respected and expected a judge’s proper role, then we wouldn't care so much what a nominee to the Supreme Court personally thought because we could be confident his rulings would follow the law and not the DNC talking points. But we don’t, and therefore we can’t.

Somewhere along the line, the left decided that judges were a convenient shortcut to avoid the unpleasant hassle of actually passing laws through the legislative process. To them, the Constitution is not a glorious barrier to government overreach – or, rather, the fact that it is one is a bug, not a feature. To them, our Constitution is an obstacle to be overcome, and any given law should be applied, if at all, only in the manner most conducive to what liberals want right this minute. Tell me what Democrat appointed a given judge in a political case and I will tell you how he will vote with 99% accuracy. No, I don't have some sort of psychic ability. I just pay attention.

It is a sad fact that judges today are simply another caste of political actors, except they don’t have to deal with the hassle of reelection and thereby the inconvenience of accountability. It's not about justice, it's about raw power – power that they shouldn’t have, but do. If the courts wish not to be treated like just another hack partisan actor, then perhaps they shouldn't act like just another hack partisan actor. We're done with these double standards. You can't expect the honor and respect due a neutral who merely seeks to do justice without being a neutral who merely seeks to do justice. This is something the news media is finding out. Journalists are stunned that people no longer respect them or their position. But of course, that respect derives from service as objective, non-partisan actors. You can’t eagerly take dictation from Hillary Clinton and then expect to be treated like some take-no-prisoners muckraker. It’s like being a radical feminist who trashes men and their role in society who is shocked to find that none of the dudes abandoning ship are willing to give her their seat in the lifeboat just because she’s phallo-challenged.

Republicans need to ram Neil Gorsuch and every other nominee for every other open seat on the federal bench right down the Democrats’ collective craw. Perhaps some suffering will change the Democrats’ perspective and encourage them to walk back from the abyss of a politicized judiciary. But if not, that's fine too. Our first choice is a neutral judiciary; our second choice is an explicitly conservative one. Option three, an expressly liberal judiciary, is no option at all.

Time to be ruthless. Time to win. If it’s all about raw power, then let them know what raw power feels like. We have it. They don’t. Too bad.

A neutral judiciary would be nice, but this is the new reality until judges decide to follow the law instead of following their bleeding hearts. We will know the judiciary has chosen judging over imposing personal preferences when RBG – whose imminent replacement needs to be so conservative he dwells in a cave – opines “Gosh, the Second Amendment says ‘the right of the people to keep and bear arms shall not be infringed,’ so AR-15s with silencers and 30 round mags are cool in New York City!” But don’t hold your breath. The libs need to suffer some more, so the GOP must move aggressively and without mercy to place as many reliable conservatives on the bench as we can. Let the battle cry sound fourth across this land!