President Trump Has Been Far Too Nice To The Mainstream Media

Kurt Schlichter
|
Posted: Feb 20, 2017 12:01 AM
Share   Tweet
The opinions expressed by columnists are their own and do not necessarily represent the views of Townhall.com. 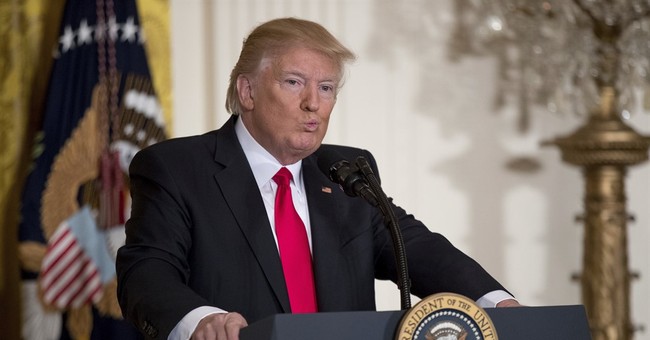 It wasn’t a press conference – it was a kinky dungeon session where masochistic journalists eagerly sought out the delicious pain Master T was dealing. Hack after hack stepped up, tried to play “gotcha.” and ended up whimpering in the fetal position. The best part was CNN’s Jim Acosta, fresh from whining about how conservative outlets now get to ask questions too, basically handing Trump the cat-o-nine tails. Dude, next time keep from talking yourself into more public humiliation by biting down on the ball gag.

The media’s safe word is “Objectivity,” but none of them uttered it.

The wonderful thing about Trump – and the thing that sets the Fredocons and wusspublicans fussing – is that he gives exactly zero damns about the media’s inflated and ridiculous self-image. He doesn’t pay lip service to their lie that they are anything but what Instapundit calls “Democratic Party operatives with bylines.” Trump called them the “the enemy of the American People,” to which normals responded with “Yeah, sounds about right.”

Trump sees them as the enemy, which they are, and he calls them what they are, just like he calls radical Islamic terrorists “radical Islamic terrorists” instead of generic “extremists” who shout “Allah Akbar!” as they commit acts of “workplace violence” whose motives remain elusive and unknowable. It would be ironic that the media hates it when a politician tells the truth, except no one still believes the media is in the truth business.

The press conference provided a great excuse for one of the media’s periodic freakouts about pretend oppression. After all, the best press is Threatened by Fascism Press, where the pampered members of the Fourth Estate get to play the heroic resistance to huge, shadowy forces intent on stilling their voices and suppressing truth and justice. Except the media might come off as a bit more sincere about freedom of speech if it spared even a fraction of its ostentatious current concern for itself for the conservatives being silenced and beaten at Berkeley while the police stood back, under orders to let it happen. Oh, and it would be more convincing if the media did not eagerly support overturning a Supreme Court ruling that said that the government could not stop people from showing a movie critical of Hillary Clinton. I’m not saying my novel People’s Republic’s depiction of a lapdog press serving the liberal fascist elite in post-secession blue America represents the media’s desired end-state, but all the evidence supports that the media’s desired end-state is totally to serve as the lapdog of a liberal fascist elite in a post-secession blue America.

Only a fevered hive mind, poisoned by unearned self-regard and a delusional sense of its own moral superiority, could seriously equate a politician pointing out the obvious fact that today’s reporters are mostly lying, incompetent jerks with Hitlerian press censorship. Tell you what – I’ll believe you when the National Guard shows up to shut down CNN by padlocking the makeup room.

Except, according to the AP, the National Guard is busy preparing to be unleashed upon the photogenic honor student dreamers who the press tells us make up the undocumented friend community – when they aren’t murdering us or voting, which our ink-stained guardians assure us totally never ever happens, and Trump lies, plus you’re a racist. Another day, another example of Fake News. My favorite part of this particular press foot-shoot was getting lectured on the intricacies of the Posse Comitatus Act by 25-year old media savants whose military experience consists of pestering their dorm mates about Call of Duty’s cartoon guns being phallocentric and how the game is insufficiently welcoming to the trans perspective.

In any case, the whole National Guard v. Aliens story was yet another giant lie in that seemingly endless series of giant lies we call “the News,” but don’t think it made the press go into spasms of reflection or self-criticism. No, those bloodhounds pivoted right back to the important stuff, like sniffing out whether someone in the West Wing might have uttered some vaguely complimentary words about Ivanka’s line of shoes. In the meantime, this lie opened the floodgates and released a horde of mouth-breathing liberals slandering our National Guard warriors as Nazis on Twitter. Thanks, media – nothing I love better than seeing my former troops’ reputations made collateral damage of your quest to bring down a president you resent because he was elected without your approval.

It’s all so pathetic, and the clichés are so hackneyed. As always, there was the “Will You Denounce X?” Guy, rolling out the usual demand that Trump “denounce” some misbehavior he has nothing to do with in what everyone who isn’t an utter moron or in Congress sees as a cheesy ploy to associate the innocent respondent with said misbehavior. The day after Israel’s leader rhapsodized about Trump’s friendship for the Jewish people, Trump’s somehow obligated to concede the implicit charge that he’s secretly ant-Semitic? It’s stupid, it’s a lie, and it’s wonderful that Trump refused to play along with this tired, hack tactic.

Then there’s the Russians/Flynn nonsense, a non-story that America non-cares about. Oh, there’s a real story there, but the press isn’t interested in that. Here’s the real story – the intelligence community under the Obama administration was obviously eavesdropping on Trump’s campaign in violation of practically every law ever written. Whether it was direct tapping of phones and emails, or illegally accessing the communications swooped up by the NSA in its nets, it’s clear that Obama’s people were spying on Obama’s political opponents. The transcript excerpts of Flynn’s phone call with the Russian diplomat leaked because it could be played off as targeting the Russian, though this was still an outrageous disclosure of American spying capabilities. What these criminals can’t do is release the communications between Americans that they possess because doing that confirms what we all know – that Obama’s people spied on his political opponents like his IRS persecuted them. The only question really is what did Obama know, and when did he know it – interestingly, on his way out the door, Obama made it easy to hide the source of the leaks by opening up access to the information across a bunch of agencies. There’s your story, a scandal that makes Watergate seem microscopic, and the mainstream media will not touch it because it would destroy the media’s political allies.

But wait, what about Trump’s bathrobe? Better flood the zone, stat!

Now, the media could try something new, like being objective and covering issues people care about. It could stop making every single question some sort of gotcha ploy designed to generate a viral clip. Normals tire of these antics; they want information that affects their lives. How about a question like “Mr. President, the market is up 10 percent since the election. Where do you expect it to go from here and why?” That’s not a softball question just because it recognizes that Trump has a success; it seeks information that every American with an IRA or 401(k) wants to know. Sexy? No. Useful? Yes. Oh, and it also totally undercut’s Trump’s ability to make the question about the press – I actually wonder how he would respond to a non-hostile, reasonable question because, outside of Katie Pavlich, I‘ve never seen him asked one.

But the media won’t learn, which is why it needs to die and be reborn as something that isn’t the hacky lackey of one of the political parties. Until then, the mainstream media will just keep on begging “Thank you Mr. President, may I have another?” and Trump will happily keep on delivering.