The Secret of President Trump’s Success

Kurt Schlichter
|
Posted: Nov 14, 2016 12:01 AM
Share   Tweet
The opinions expressed by columnists are their own and do not necessarily represent the views of Townhall.com. 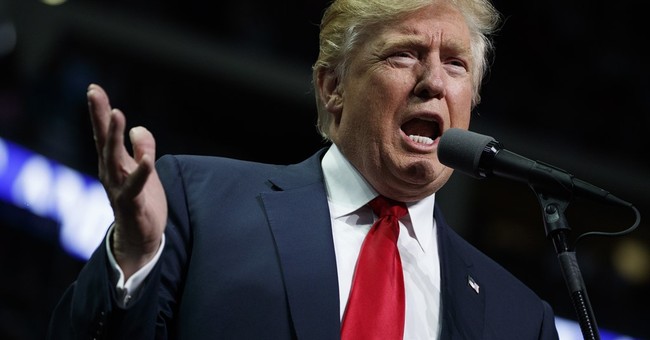 It was bitterly cold on January 20, 2025, when President Donald J. Trump turned over his office to Mike Pence – no one noted the irony, the world having forgotten the global warming scam that had so obsessed liberals in the 2000s and the first part of the 2010s while America fell apart on their watch. President Trump had aged noticeably, growing into a beloved figure among most Americans but remaining an object of bitter scorn to others, mostly leftists furious at how he had so shockingly snatched the future from their claws and left the Democratic Party a smoldering ruin.

He did it by keeping his promises, and the party of the left had yet to recover. How do you run against the first stretch of shared prosperity in decades, against renewed respect around the world, and against an America made great again?

You don’t. Instead, you run on a platform of cultural snobbery, on the notion that a vote against Donald Trump and then Mike Pence was a virtue signal that you weren’t one of them. One of the uncool, the unhip, the ones who prayed to God and fought in wars and built the lofts where snarky hipsters dwelled, their Trump-voting parents back in Connecticut footing the rent, walking streets made safe by cops and fireman the elite did not deign to speak to.

Their electoral routs made one liberal happy – Michael Dukakis. Now, the commentators had to reach back to two-state loser Walter Mondale to find a comparable analogy when the latest Democrat sacrifice was dispatched.

How did Donald Trump, who came into office with unfavorables in the 60s go from generally despised to generally beloved? Simple. He kept his promises.

Trump understood what many of his critics never did – that his rise was less due to a cult of personality than the fact that voters were tired of being lied to. They wanted leaders who kept their promises, not ones who rolled into town right before the next election, said what they thought the citizens wanted to hear, and then returned home to Washington to serve not their constituents but the interests of the elites. So Trump – like Reagan, reviled by the self-appointed intelligentsia that he ran circles around – made one guiding principle clear.

“My administration,” he told his cabinet and the Congressional Republican leadership, “is going to keep its word. Period.”

Paul Ryan shifted uncomfortably in his seat; he knew his wonky, preferred policy priorities were going to have to wait. Mitch McConnell sat stone-faced; a canny operator, he understood that if he again prioritized his treasured Senate traditions over support for the voters’ policies, instead of adding seats in 2018, it would be a bloodbath. Mindful that the GOP Senate candidates who lost in 2016 were the ones who repudiated the GOP nominee, neither could shake the nagging thought of Donald Trump campaigning against Republicans who would not play ball. So play ball they did.

In the first hundred days, President Trump focused on demonstrating his commitment to seeing his promises to fruition by taking tangible action. He immediately called a special session of Congress to deal with Obamacare. The cunning Majority Leader managed to act through reconciliation, avoiding the need to nuke the filibuster, and within a month President Trump had repealed and replaced his predecessor’s singular achievement.

But when the president solved his Ted Cruz problem by nominating his opponent to the Supreme Court, McConnell was forced to invoke the “Reid Rule” and confirm him by a simple majority. When Justice Ginsburg retired later in 2017 due to health concerns, the president appointed Texas Supreme Court Justice and noted Twitter user Don Willett. The two young Texans would proceed to stiffen the judiciary’s wavering fidelity to the Constitution, helped in no small part by the nearly 100 new judges on the lower courts appointed and confirmed within the first few months of the administration.

President Trump, the master dealmaker, having thrown two huge bones to conservatives, demanded and received something in return – a huge bill to rebuild infrastructure while helping the left-behind Americans who had trusted him with their votes. These really were shovel-ready projects – the president was not simply shoveling money to cronies. He demanded results. Airports, harbors, highways – the former developer took a personal interest in the projects, overseeing their planning and execution, even firing several administrators who were not cutting it. He did not tolerate delays or extended timelines. “We won World War II in three and a half years, so this highway is getting rebuilt in one, and if you can’t do it I’ll find someone who can!”

Critically, the president would visit the locations of the projects to announce them, especially in inner cities, which he made a personal priority. Surrounded by community leaders, businesspeople and religious figures, he would assure the people that the local projects were going to be built by local people – and he ensured that each project budgeted funds to train the displaced and unemployed to do much of the work. “We are not just building new lanes for the 405 freeway,” he told a mostly minority crowd in Inglewood, California. “We’re building a new work force!” He repeated this in urban communities across the country, and in 2020, he took an astonishing 30 percent of the black vote.

Included as part of his infrastructure initiative, so the Democrats dared not obstruct it, was a provision to start building the wall, not later, not sometime down the road, but now. Thanks to language that barred court challenges based on environmental and other laws, a hard-hatted President Trump was in El Paso on April 1, 2017, turning over the first ceremonial shovelful of dirt. And on October 1, 2017, he was back in El Paso for the dedication of the first 50-mile segment of the border wall – on time and under budget.

America also went back to work rebuilding the military. Defense Secretary Jim Talent took the focus off transphobia awareness and put it back on combat readiness. Commanders in the field received the support they needed to defeat the cancer that was ISIS, not just the bare minimum necessary to keep it off the front pages. Secretary of State John Bolton patched up relations with wary allies and put potential adversaries on notice that the days of America leading from behind were behind us. And United Nations Ambassador Rick Grenell steadfastly stood up for America and side-by-side with Israel against the corrupt dictatorships and progressive posers in the General Assembly. Slowly, the contempt for America that Obama’s weakness had engendered turned to a healthy respect among well-wishers, and to fear among enemies.

President Trump went on to keep other promises – tax cuts, better trade deals, rollbacks of regulations. On day one in office, he had fired every senior official in the government – there would be no liberal holdovers staying on to “help.” Then he held his appointees accountable to fulfill his priorities – to clean up and depoliticize the Department of Justice and IRS, to focus the Department of Education on education instead of male bashing, and to stop the EPA from strangling America’s energy industry to please Chardonnay-swilling swells in San Francisco who feared the weather.

The economy returned to life, stimulated by economic freedom and unfettered by interference by know-it-all bureaucrats whose pre-government private sector experience consisted of working as a barista at the Common Grounds coffee house for three weeks during the summer of their junior year at Yale.

It was not all smooth sailing. There were challenges. The deficit rose until the booming economy began to refill the treasury. There were scandals, mostly by second tier appointees doing stupid things – luckily, President Trump was not hesitant to pick up the phone and shout “You’re fired!” when necessary. The American people understood that there would be the occasional problem – what they appreciated is that under President Trump, there was accountability. No longer were the elite and connected coddled and protected.