With Clinton We Will Be Under Occupation In Our Own Country

Kurt Schlichter
|
Posted: Oct 10, 2016 6:12 AM
Share   Tweet
The opinions expressed by columnists are their own and do not necessarily represent the views of Townhall.com. 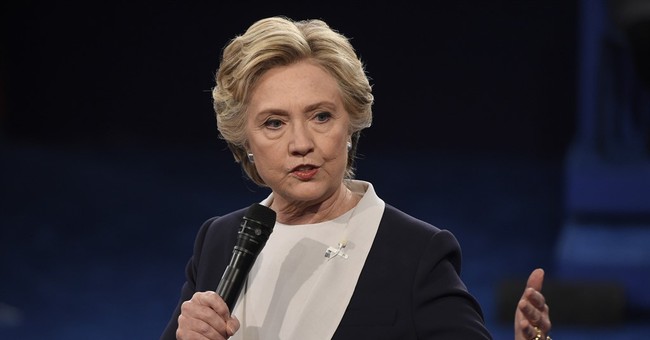 By the time you read this, we will know if Donald Trump pulled off a miracle and overcame his myriad personal shortcomings to win the second debate and maybe save his candidacy by holding Hillary Clinton accountable for the legacy of failure she intends to continue. But more likely he will have spent the town hall excusing his locker room trash talk while the wife of a serial sex abuser stood smiling that Stepfordy smile as she watched him chase rhetorical squirrels down into the sewer.

The anti-establishment resistance chose a loathsome creep as their avatar to fight an even worse monster; we could have had Cruz, but the GOP hated him more. So here we are. Let’s face it – the combined force of the Washington elite, the brown-nose media, Hollywood, and an eager group of fascisty inclined liberals allying with deadbeats and welfare cheats will likely defeat the normals for the presidency next month. And we normal Americans will be living under occupation in our own country for the foreseeable future.

They hate us, you know. Hillary and her corps of elitists hate those of us who refuse to submit, who refuse to bow, who stubbornly insist on our rights and that our voices be heard. And they will gladly tell you that. We’re “deplorable.” We’re “irredeemable.” We’re their enemies.

Not fellow citizens who disagree. Enemies, to be punished and oppressed. Just ask them – aren’t shy about admitting it. They’re proud of it.

They are playing with fire. And it’s not hard to imagine the terrible consequences of their folly. In fact, I have, and if you read the reviews you’ll see many people have come to the same dark conclusion.

The future is bleak – even if Trump miraculously prevails over his genital grab gabbing and the worse stuff his enemies will be dropping down the road, the future is bleak because Trump is merely a firewall against this particular aspiring tyrant. The quest for tyranny won’t stop even if Hillary’s schemes are frustrated this November. There’ll be another libfascist next time, and another.

Trump won’t bring the foundational conservative change America needs to survive. He’ll merely stop the bleeding for a few years until he goes away. What won’t change is the fact that the system is not merely rigged; it is actively designed to suppress and repress those who reject subjugation by, and submission to, the liberal elite. They do not want us to be, nor do they have any intention of letting us be, free, unmolested, and active participants in our own governance.

So what do we do?

We never give up, we never give in. Trump may lose, but Trump is irrelevant to our struggle to maintain our rights and freedom. That fight must continue even as Trump’s personal failings flush his chances down the commode.

Understand that the left has no moral right to rule us. Hillary Clinton is just another super-white white collar criminal, except instead of buying a pardon from the Clintons to escape justice she called in favors owed to the Clintons. Her leprous claws infect and corrupt everything they touch. Comey’s vaunted integrity is now a bitter joke; the FBI he heads is today understood to simply be another catspaw to be used to protect liberals and punish their enemies. The Department of Justice has zero to do with justice and is barely even a department; it’s more of an annex of the Democrat party. The IRS understands its job is to harass and oppress enemies of the regime under the color of law.

Yes, “regime.” America has devolved, and will devolve further, into banana republicanism. Remember, when your enemies are “irredeemable,” then you have excused yourself from having to treat them as if they have the rights of “redeemable” citizens. You know, the citizens (and non-citizens) who redeem their votes and obedience for handouts and favors from Democrats.

So what do we do?

We refuse to give these bastards a single inch.

We refuse to give them our respect or obedience. Let’s get our minds right here – the key to liberal success is our consent and acquiescence, and they will demand it based upon the lie that 2016 is a mandate for their petty tyranny. It’s not. It’s a rejection of a creepy buffoon who got where he is simply by being the only one who would stand up to the lies and the cronyism. They can’t make us do anything, unless they send people with guns. And don’t count on femboy hipsters in skinny jeans to be those guys.

We have to sign off on our own subservience. So let’s not.

Let’s find new leaders with a taste for victory and no history of loathsomeness – though if Mitt can be smeared anyone can (and will) be. The GOP failed us by failing to offer us a party that would take up the mantle of the Constitution and actually fight – the establishment seems to fear victory more than defeat. That left us a flawed clown as our standard bearer. Trump was the GOP’s fault, but let’s not fool ourselves. Any Republican would have been lied about and savaged as racist, sexist, and all the other ists by the left and the media. The fix was always in.

You will be lied to and told that Hillary won because Americans yearn for her grating brand of schoolmarm socialism. That’s a lie. She will win only because Donald Trump is a terrible person, and far too many Americans will allow their decency to be exploited by the supporters of a serial sex abuser who has the whole media aggressively covering for her.

When you have lost fair and square in a republic with democratic features, with your voices heard and your case presented and considered, then you should consider the winner as legitimate and give the appropriate respect to the office. But Hillary Clinton is merely a felon excused from accountability by transparent corruption. We have no moral obligation to her or to her evil schemes. So when you hear that we should fall in line, you should laugh.

She will seek to crush our freedom of speech. So speak up more, and louder, and fearlessly. Never apologize.

She will seek to disarm us to make us vulnerable and subservient. Buy guns and ammunition, and create facts on the grounds that will frustrate her unconstitutional fantasies.

She will try to end run the Constitution. Don’t cooperate. You not only have no moral obligation to support unconstitutional acts but you have an affirmative duty to resist them. When on juries, stand firm for the law instead of partisan prejudice. If you’re a government worker, whistle-blow.

Organize. Activate. Never surrender no matter how much you want to spend election night with your head under a pillow and an empty bottle of Jose Cuervo on your bedside table.

The polite resistance of the Tea Party was met with media and government oppression. The impolite resistance of the Donald Trump candidacy was met with media and government oppression. There is one last option on the table – we must resist with a peaceful but resolute conservative insurgency designed to, over the long haul, retake our rightful place as citizens and establish our nation’s commitment to the Constitution through political means.

The alternative is to keep being pushed and pushed until the normal and decent majority of Americans can fall back no farther. And then real civil disorder and conflict will be nearly inevitable because the disenfranchised will have no choice but to either surrender or begin to take steps outside of the system as currently constituted.