Because Famous Liberal Women Are Special, You Peasants

Kurt Schlichter
|
Posted: Sep 05, 2016 12:01 AM
Share   Tweet
The opinions expressed by columnists are their own and do not necessarily represent the views of Townhall.com. 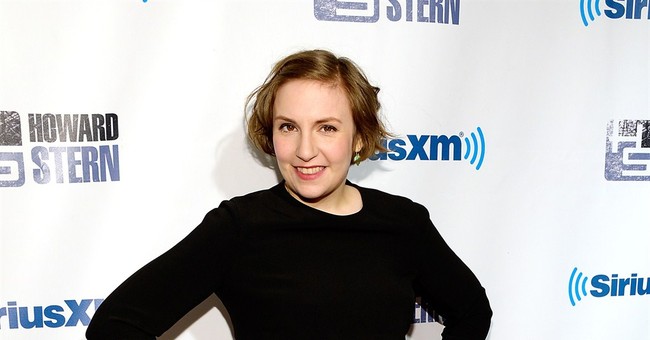 Being a famous liberal woman makes you special and I guess us peasants ought to just get used to it.

Re-entering our collective consciousness this week is famous liberal woman and scourge of Golden Corrals everywhere, Lena Dunham. She had faded from view for a blessed while after Hollywood realized that its inexplicable campaign to make her a superstar was cratering. She did not help it when she outed herself as history’s worst babysitter, nor when her HBO show became the only series in the history of cable television to lose ratings because of too much nudity.

But now she’s back, with her dead cow eyes and her utter conviction that the world is waiting for her to verbalize every single random thought that wanders through the vast, empty expanse of her noggin. In July she complained that the poster for that new Jason Bourne movie none of us saw showed a pistol. It would have been hilarious if she had whined about it in terms of slamming Matt Damon’s gun fascist hypocrisy, but no, it was more of an aesthetic complaint. She just doesn’t think we should see guns because she doesn’t like guns. Then she committed her own aesthetic crime, unleashing upon an unsuspecting world un-retouched shots of her modeling lingerie. Caution: These visual IEDs are unsafe for work and everywhere else. You’ve been warned.

But now she has gone beyond merely asserting her entitlement to decide for all of us what posters may depict and to redefine what is and is not attractive. Now she is demanding that black men adore her. Talking to Amy Schumer, another whiny Hollywood quarter-wit who puts the “over” in “over-rated,” Dunham said:

"I was sitting next to Odell Beckham Jr., and it was so amazing because it was like he looked at me and he determined I was not the shape of a woman by his standards. He was like, ‘That's a marshmallow. That's a child. That's a dog.’ It wasn't mean -- he just seemed confused.

It was like we were forced to be together, and he literally was scrolling Instagram rather than have to look at a woman in a bow tie. I was like, 'This should be called the Metropolitan Museum of Getting Rejected by Athletes.'"

Yes, Whitey McMayonaise was outraged that an African-American man somehow resisted her – the nerve of him, preferring to bury himself in his iPhone instead of fussing and cooing over her awesomeness! “I was not the shape of a woman by his standards…” How dare he have standards – if that catches on, Dunham and Schumer and the cast of the new Ghostbusters and the rest of the hard threes Hollywood seems intent on forcing down America’s throat are doomed.

Maybe, just maybe, Beckham looked over at her and saw an ugly person – not physically, but in terms of her sense of entitlement and narcissism. There’s a word for this whole sorry scene, and no Lena, it’s not “sexism” or even “fatism.” It’s more like “racism.” Imagine how the social justice warriors would go on the social justice warpath if some wealthy conservative jerk pulled a Margaret Dumontesque “Well, I never!” when a minority dared to reject her dubious charms. But hey, Lena’s a famous liberal woman and special rules apply.

Of course, it’s all fun and games with Lena Dunham, unless you’re her sister or that guy she falsely accused of sexually assaulting her. But there’s another famous liberal woman who is ignoring the rules too, blatantly, openly, and without apology. And these are not mere social convention kind of rules. These are laws, the kind of laws where other people who break them go to jail. And these are laws involving the security of our country.

That famous liberal woman is, of course, Hillary Clinton.

Just the other day – you know, late afternoon on the Friday before Labor Day – the FBI released more documents and reports related to her email shenanigans. What they revealed was, of course, that a situation that was already terrible was actually about ten times more terrible than we ever imagined. Not only did the Woman Most Qualified Ever To Be President not know how classification works, and not only did the bar-failing, chronically sick crone forget pretty much everything she ever did or said or heard, but she also managed to lose about a dozen Blackberry phones that she used to transmit classified materials.

Now, for those of you who have not worked with classified material and the equipment that transmits it, let me share with you how it might go for someone who, say, was a military guy and not a famous liberal woman:

Hi Colonel. How’s it going? By the way, I think I misplaced about 13 of those communication devices we use for classified materials. Wacky me, right? I forget where. Maybe I left them out at the range, or maybe at the base Burger King. I was getting one of those Whopperritos – yum!

Say Colonel, you don’t look so good. You’re all ashen and sweaty. Did you accidentally click on those Lena Dunham lingerie photos? Are you hungry? Do you want a bite of my Whopperito?

Cue the lockdown of the base, the 24/7 search for the missing gear, and the MPs to come and haul away Lieutenant Schmuckarelli. Oh, but don’t worry about Hillary’s lost gear. Some of those missing phones were hit with hammers, which apparently Huma and Company believes magically erases electronic data, so I guess it’s all good.

Are you freaking kidding me? If it wasn’t a famous liberal woman the elite is dying to install as president, this person would be Cool Hand Lukeing it in Leavenworth until the year 2100.

But famous liberal women don’t have to play by the rules. They can be bizarrely racist and the trained seals of the media will happily clap their fins. They can commit clear, unequivocal crimes and the FBI will eagerly do on its reputation what a bear does in the woods to excuse her. Because, after all, unlike us peasants, famous liberal women are special.