For America, the Fall of the Roman Empire Is the Best Case Scenario

Kurt Schlichter
|
Posted: Mar 28, 2016 12:01 AM
Share   Tweet
The opinions expressed by columnists are their own and do not necessarily represent the views of Townhall.com. 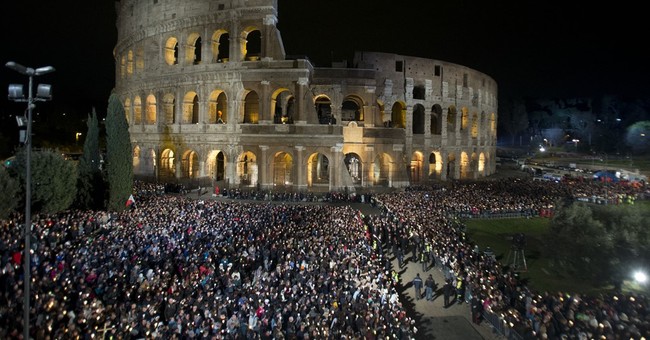 A lot of people, especially Millennials with degrees in Intersectional Climate Change Gender Studies, may not know it, but there is a way to anticipate what’s going to happen in the future. It’s not perfect, but it helps you make educated guesses about what’s next. It’s called “History,” and apparently no one in our ruling class has ever heard of it.

Roman history is especially applicable to America and all of Western civilization. The Romans had a good run, but then their moral, political, and cultural weaknesses grew insurmountable and the empire fell. Not all at once, mind you, but slowly – Rome fell long before the barbarians showed up at the city gates and started looting. Rome was powerful enough that its unworthy inheritors were able to live off the corpse for a few centuries before its enemies finished it off. In fact, Rome today still lives off the past. You go to Rome today primarily to see the ruins, and to shake your head over what the Romans just threw away.

The first phase of Roman civilization was the Republic, with something like a democracy (at least for some people) but with a definite rule of law, formal and especially informal. Noble Romans dedicated their lives to upholding these informal norms and values, the mos maiorum that formed the foundation of their society. The elite had its indulgences, but the expectation of a young noble Roman was that he would be highly educated, that he would serve Rome in its Army, and then move into politics and continue to serve in a series of governmental and diplomatic offices. And, if it came to it, he was expected to die for Rome.

But human nature asserted itself and the Republic became unstable, as factions developed and the mos maiorum was put aside for the sake of expediency. Populist politicians arose and agitated for the rights of regular Romans; the patricians were scandalized and fought back, sometimes killing the populist leaders. Eventually, some cunning Romans figured out that the armies they had been entrusted with were useful for more than crushing Rome’s foreign enemies. Sulla and then Caesar, frustrated by the checks and balances of the Republic – neither of them was a check and balance kind of guy – used their commands to take power. They were emperors in all but name; after the patricians tried one last time to reassert the Republic by getting stabby with Julius, the empire was born.

And thus began a period of glory that was in reality merely a blip in the long trend line downward. With the Republic gone, there was an imperial bureaucracy to take on many of the responsibilities citizens had once personally undertaken. The defense of Rome was outsourced to barbarians, who were allowed into Roman territory but never integrated. That, of course, went poorly. But Republican Rome’s inertia was strong enough to propel the Western empire on for another five centuries before it finally collapsed in exhaustion.

And now our civilization is likewise demonstrating its own shortness of breath, with Europe a few decades ahead of us on the downslope. Europe is utterly exhausted. It believes in nothing – its churches are empty and that hopelessness has translated into a demographic death spiral. Europe does nothing new and merely feeds off of the fading triumphs of the last century. Its politics are frozen in a cycle of failure even as the barbarians it unwisely invited into its midst establish their own internal kingdoms. The elite is no longer composed of citizen-soldier-politicians in the mode of the ancient Roman patricians, or even the modern Winston Churchill. Instead, it is all bland bureaucrats, terrified of losing power and using their regulatory cudgel to squelch the unrest by marginalizing the unsatisfied and outlawing the speech of the uncooperative.

But while the elite obsesses about stomping out “racism” and “sexism” and “cisnormativity,” the real enemy slaughters Europeans at will. But pretty soon the surviving Europeans’ waning survival instinct will kick in and they will notice that Muslim terrorists are not running free in Putin’s Russia. Then they too will reject the chaos of their failing Republic for strongmen, and their course will be set.

Here at home, the left has tossed out our own American mos maiorum, with Obama leading the charge to disregard the norms and customs that he finds far too constricting. Obama is the poster child for the ruling class’s decline. He is poorly educated – internalizing your commie prof’s clichés and lies does not make you educated even if your degree says “Harvard” – and utterly without any personal investment through service to his country (Obama in the military? That’s a laugh. Do they make camo mom pants?). Of course he has no respect for our norms and customs – he does not know anything about them and he has no personal investment in them. He has no business running anything, as he has amply demonstrated during perhaps the most damaging presidency since James Buchannan’s.

Led by pedestrian street agitators like Obama and his equally undistinguished cohort of leftist allies, the left has gleefully chipped at the foundations of our American Republic, not understanding that our society is not static. They cannot disregard the rules and expect the rest of us to keep obeying them. Oh, some try – the GOP establishment’s supine response to Obama can be understood as a desperate gambit to try and preserve the old ways. They hope – without basis – that Obama is merely a blip and that after he flies off into his narcissistic sunset in a gas-guzzling jet things will go back to normal. Their strategy is passive. They want to wait him out.

And then we have Donald Trump, who cares nothing for norms and customs and embraces raw power much as Obama and the left do, only he promises to protect the interests of a different constituency. He’s a would-be Caesarean strongman/savior, though to analogize him further to Julius Caesar is to insult the concept of analogies. Trump is a vulgar fool milking phony populism for power, best understood as a particularly tacky Graachi. Unlike them, Trump is both ignorant and a coward, but like them, if he does get elected president, he will be cut off at the knees by the patricians of the establishment.

Hillary Clinton is an even more anti-Republic candidate. Like Trump and Obama, she cares nothing for anything but power. Another sub-par mind trading off her degrees from a half century ago, this unaccomplished, bitter harridan lacks the wisdom to chart a course that avoids aggravating our society’s already gaping wounds. Instead, she’ll pour salt into them for no reason other than her own delight at asserting power, gleefully poking at normals with initiatives like forcing women to accept men into their bathrooms and trying to disarm the law-abiding. Inevitably, she will be stunned when she finds her actions greeted by a reaction she cannot control, and the American Republic will disappear as her rule by power is replaced by her opponents’ rule by power. Oh, we may get a good emperor or two along the way, but history tells us how this story ends.

Someday, after the gloom of the next Dark Age clears, some tourist from a society that has rediscovered liberty will look at the ruins of the Capitol and shake his head at the fools who did not realize what they were throwing away.