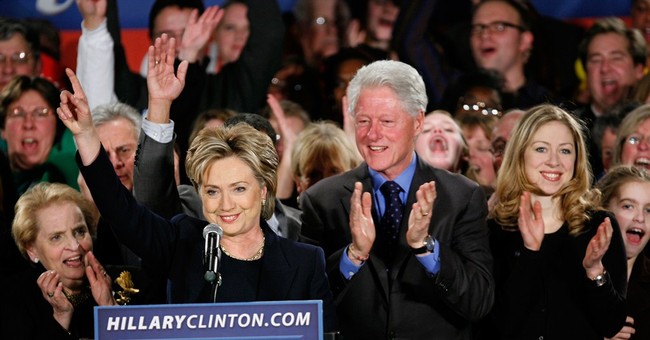 The last time some Twitter leftist sneered at me and called me a “breeder,” I wondered whether this collectivist genius considered not reproducing to be a wise long-term strategy. The fact is that in America, most of the time it’s the traditional, conservative people who choose to have children. Between their contempt for traditional family life, their abortion fetish, and the vexing problem of the fact that neither XX+XX nor XY+XY equals “baby,” leftists are dropping below their replacement fertility rate. But letting them die out is not enough; we conservatives need to outbreed them.

Basically, we already erotically high-achieving conservatives need to do even better. Sure, it’s a sacrifice, but we owe it to our country.

Liberal women, encouraged by the sour crones of the radical feminist movement, often wait far too long to marry and to begin families. They were lied to – you can’t have it all. Life is choices, and a family is a choice that means trade-offs. Choose unwisely, and one may not be able to undue the relentless ticking of the biological clock.

And as far as liberal men go, well, just look at them. It’s hard muster raw sexual energy when you think foreplay consists of sobbing to your life partner about how you can’t bear the weight of your undeserved phallocentic privilege.

When leftists do breed, it seems less like a joyous reaffirmation of God’s bounty than a concession to a vaguely unpleasant conformity. Here in the heart of blue America, I see coastal liberals pushing their designer strollers with their one sad, designer clothes-clad kid. But it’s less a kid then a receptacle for their own inadequacies and unhappiness.

Maybe they think that by filling up their kids’ lives with “enrichment” activities and piles of expensive stuff they can fill up their own empty lives. Who needs things like God, country and honor anyway? “Those are for those knuckledragging Red State losers! Wait, I’m feeling down – better give the kid to the nanny and take another Adderall with a glass of chardonnay!”

Chelsea Clinton is the archetype, the living result of a transactional marriage between two leftists, lavished with attention and constant reinforcement, a spoiled non-entity who ends up bedecked in Bulgari jewels and a Derek Lam blouse on a magazine cover opining upon life as if she had earned that right by achieving anything on her own. Confusing luck with accomplishments – like mother like daughter.

Conservative families, in contrast, have children not for themselves, but for the future. We’re optimists, not pessimists who think all of this is meaningless and see a kid as a way to ease their existential pain. The nurseries at the liberal mainline churches are as barren as liberal womens’ wombs; those at evangelical churches, where they take this whole “God thing” seriously, are bursting at the seams.

Of course, the liberals’ answer is to fight the numbers with amnesty, importing what they hope will be fertile new recruits for their grim ideology in from the Third World. But the problem is that once here, those immigrants who share liberal values eventually stop having babies too. It seems abortion and reproduction don’t mix. The black community has already suffered depredations from the abortion laws Democrats love, a Democrat crime that dwarfs the crime that was Jim Crow. Now immigrant women seem to be taking a cue from liberal women and doing the same. In the meantime, red states like Utah and Texas grow and grow while blue states California and New York gray and shrivel.

Conservatives, it is not enough to merely produce children or, as so many do, adopt those already here. We must nurture them and teach them properly because liberal society is determined to corrupt them and convert them into eager drones for the Borg Collective that is progressivism. Fight back. If you are religious, teach your children about God. If not, teach them to respect and understand those who are. Teach them about our country and our history – there’s no better way to demonstrate to them, as opposed to indoctrinate them, why America deserves their patriotism. My earliest memory is of standing on a Gettysburg battlefield, not far from where my family’s hometown had been burned by Confederate raiders. There really was never much question that someday I would help defend our country as I aspired to be like the heroes who died on those fields.

And teach your kids skills that will help them survive. Teach them to fight, and to shoot. Teach them to be steadfast in the defense of their rights, and to stand up for those being oppressed. My kids have a standing offer – if their school suspends them for justifiably punching a bully they get taken out for ice cream. And demand that your school teaches your kids properly – as Glenn “Instapundit” Reynolds often says, sending your kids to public schools is almost parental malpractice.

Not all conservatives will choose to have kids. Some can’t, and some have personal reasons not to – as grown men and women, none of them owe us any explanation. But by and large, we conservatives will outbreed our opponents if we just keep at it. So get some cabernet poured and some Barry White on and get busy, conservatives. Get busy…for America.