Nightmare Averted! Sandra Fluke Won’t Be Representing Me In Congress 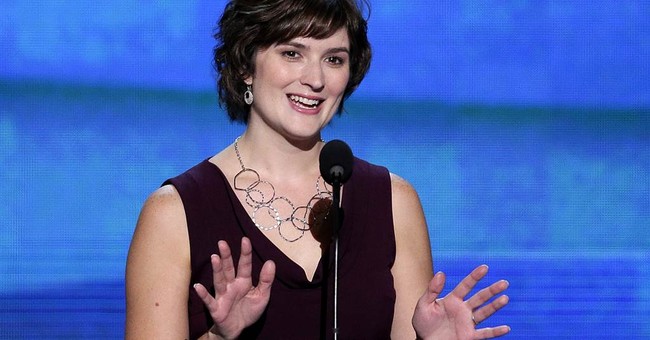 For a few terrifying moments last week, Sandra Fluke wanted to be my congressman.

Opps, I mean congresswoman. Wait, I’m being gender normative again and assuming you can only be “male” or “female.” That’s so sexist. Probably racist too.

Ok, let me try again. For a couple days, Sandra Fluke wanted to be my congressbeing.

Wait, is that beingist? Trying to be as PC as my progressive milieu is so hard sometimes.

See, I live in the South Bay area of Los Angeles, which is in California’s 33rd Congressional District. The 33rd was designed by the totally nonpartisan, neutral and independent redistricting commission to writhe and twist its way up the coast, gathering into one district every pinko, commie and goose-stepping liberal fascist within whining distance of the Pacific Ocean. Michael Barone would know for sure, but I think my district is something like Obama +42.

Let me put it this way: As a conservative veteran who believes in God, the flag and never, ever hugging, I count as “diversity” for pretty much everyone I know here.

Our current congressman is Henry Waxman, that youthful, vibrant, and fresh face of liberalism. After 40 years, he has an unbroken record of being wrong on every single issue. He is retiring, having failed in his quest to destroy America as the Founders imagined it.

And Sandra Fluke announced that she was going to complete his life’s work.

You know, as I went about my daily business here in the South Bay, at the beach, in the bars, then in other bars, I could feel the excitement Sandra Fluke’s potential candidacy generated. After all, our biggest issue here is how to address the needs of grown women in law school who can’t figure out how to pay for their own birth control.

Now, I was a grown man in law school once, and I somehow managed to pay for my own birth control. But I can’t presume to understand the personal struggles of a 31 year old woman like Sandra Fluke who was unable to figure out how to come up with the dough for her own contraceptives. To even try would be a patriarchal microaggression of macro proportions. And the last thing I want to do is microaggress by expecting a woman to meet the same standards of self-sufficiency as a man.

Still, we can’t take away from Sandy the fact that she has a formidable track record of accomplishment. Literally, one accomplishment. She passed the California Bar exam in 2012. Good for her, but let’s not pretend that it takes a genius. You should see some of the people I deal with every day.

So, the person who wanted to represent me in Congress based her short-lived candidacy entirely on a resume that consisted of becoming a lawyer – yeah, we need more of those in Washington – and being America’s most celebrated contraceptive moocher.

You could just see her debate opponent gingerly tiptoeing around saying what he/she really, really wanted to say about this feminist icon, but couldn’t: “Seriously? Sandra Fluke? Are you freaking kidding me? I paid my dues and she couldn’t even pay for her diaphragm!”

Instead, her opponents would have had to nod and mouth platitudes about how Fluke’s whiny demands that other people subsidize her lifestyle make her “an important voice for independent (sic) women everywhere.”

But the machine never let it get that far. After Fluke started getting media coverage, the machine laid down the law. Sandra pulled out quick – insert your own joke here – and promised to run for a state senate seat instead. I guess she figured we need a voice in Sacramento speaking out against California’s ultraconservative status quo.

Now, thanks to the Golden State’s weird primary laws, the contest in the 33rd will probably be between two other Democrats, Left and Leftier. But there is another option.

I could run for the seat. A conservative Republican (at least until the GOP enacts amnesty) who expects people to pay for their own birth control, and who supports the repeal of all social programs that don’t involve giving money to wounded warriors, has a theoretical chance of winning. After all, we elected a Republican in the 33rd back in the 90s. Of course, it was the 1890s.

So, here’s my plan for 2014. I’m going to sit back and watch the train wreck. Well, not exactly sit back. I’ve been practicing what I preach by getting involved at the local level as we try to make Republicans viable around here again. And there are plenty of solid conservative candidates like Tom Cotton who might actually win to support out there in sane America.