Conservatives Should Point and Laugh as Detroit Dies 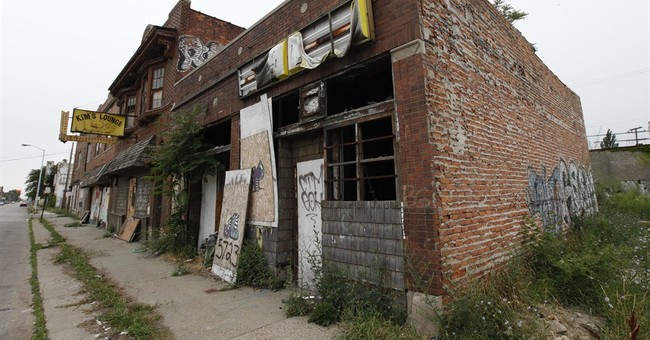 The agonizing death of Detroit is cause for celebration. It’s the first of the liberal-run big cities and states to fall, and we should welcome its collapse with glee.

Yeah, liberals, eventually you do run out of other people’s money.

The blue state model is a terminal disease, and Detroit is its poster child. Only this is one telethon where we should pledge that we won’t pay a single dime to keep the progressive party going a single minute longer.

Detroit represents the epitome of the blue state, Democrat machine liberalism that Barack Obama represents. Well, not one damn cent for Barry’s Kids.

Liberal media mouthpieces like the New York Times are all in a tizzy because the consequences conservatives have been warning America about for years are finally arriving. “We have to step in and save Detroit,” it cries.

We don’t have to do any such thing.

Steven Rattner, writing in the Times, says “But apart from voting in elections, the 700,000 remaining residents of the Motor City are no more responsible for Detroit’s problems than were the victims of Hurricane Sandy for theirs, and eventually Congress decided to help them.” And apart from the iceberg, the Titanic’s maiden voyage went swimmingly.

This is a problem created by the people of Detroit. It’s their problem to solve – without our money.

If you listen to the hand-wringers, you’ll never hear an honest examination of why Detroit is imploding. Nor do they offer any evidence that the half-wits who elected the quarter-wit Democrats governing them have learned anything at all from this trip to the precipice.

The most hilarious arguments are the ones where liberals whine about the middle class fleeing from the city, taking jobs and the tax base with them. Sure, regular folks took a look at the well-governed, stable, crime-free Utopia that was Detroit and thought, “Yeah, we need to get the hell out of here.”

This isn’t a chicken and the egg brainteaser. It’s simple cause and effect. Liberalism turned Detroit into a hideous dump that milked those who contribute to society to pay off the Democrat machine’s constituents who don’t. People didn’t feel like living in a pig sty while serving as piggy banks for corrupt Democrats. The productive decided that while the non-productive might win by voting at the ballot box, the productive would win by voting with their feet.

Yeah, Detroit had some hard knocks. The auto industry collapsed, which is not surprising since it was the blue state model in corporatist form. But every city takes hits. Dallas and Houston have been slammed again and again by the energy sector, and they keep coming back.

What did Detroit do about it? Nothing. The auto industry started changing decades ago, but liberals act as if that change somehow excuses Detroit’s legacy of corruption and incompetence. Detroit’s most significant export in decades was Eminem. That’s reason enough to want to see a stake driven through its metaphorical heart.

But, of course it’s all the Republicans’ fault…for some reason. Rattner says, “If I thought it could pass Congress, I’d happily support a special appropriation, but the politics of any spending are toxic in Washington these days.” Yeah, it is toxic to suggest that those of us who didn’t vote in a succession of criminals to run our governments give our money to morons who did. And, in any sane universe, no one would ever suggest doing so.

But this is the Times, the voice of Big Liberalism. It opines that, “America is just as much about aiding those less fortunate as it is about personal responsibility.” Except, America isn’t about “aiding the less fortunate.” It’s about the “less fortunate” working to make themselves “more fortunate” – understanding that liberals think people become financially stable not through hard work but by dumb luck.

Not surprisingly, in a Times article referring to the miserable condition of a city run by a liberal Democrat machine for half a century, there is no mention of either liberalism or Democrats. That’s like writing about obesity and not mentioning food.

The liberal elite, which loves root causes, absolutely refuses to admit that the root cause of Detroit’s woes is liberalism itself. Liberals are like a drunk who wants the benefits of sobriety while continuing to hoist highballs. Step One is admitting that their ideology has a problem.

We conservatives should sit back and giggle as liberalism hits bottom. No, Detroit’s collapse won’t teach liberals anything. The big cities and the blue states will fail no matter what. Liberalism is the locust of political ideologies; it will eat everything in sight and then starve.

But Detroit may serve a useful purpose once again as a cautionary example for future generations, so for that reason as well we should welcome its passing. And as it dies, the last words ringing in its ears should be the voices of laughing conservatives saying, “We told you so.”