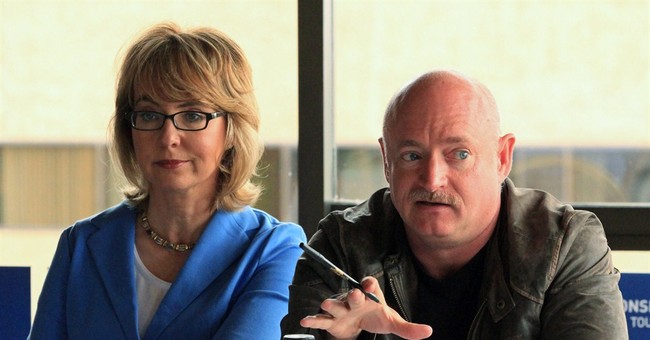 Gabby Giffords and her still-weightless astronaut husband are like a gun-grabbing Foghat, eternally playing the state fair circuit of American politics. Now they are literally going on tour again, hoping that their audience will forgo the old favorites and welcome a track off their new album.

She’s really just a one-hit wonder hoping to match the airplay of her power ballad “I Suffered a Tragedy So I Have Special Moral Standing (To Advocate Stripping You of Your Fundamental Rights).” The sad truth is that she is the Psy of liberal advocacy, far past her 15 minutes yet valiantly trying to recapture the glory of her gun control Gangnam Style.

Her new tune is apparently entitled “Patriot” because her latest op-ed uses some form of that term four times in about 750 words. I guess it’s now “patriotic” to want to impinge on the constitutional rights of fellow Americans. She doesn’t explain why.

She also warbles about how gun rights come with “responsibilities,” using some version of that term eight times. Except the point of a “right” is that it isn’t contingent upon fulfilling “responsibilities.” It is a foundational element of our social contract and is not subject to infringement by leftists simply because they cloak their oppression with focus group-erriffic labels like “responsibilities.”

If you misuse a gun, the judicial system deals with you afterwards. But you have to misuse a gun before the government gets to limit your rights. Clichés about “responsibility” that sound like they were cribbed from Spiderman movie dialogue are not a meaningful statement of basic Constitutional principles.

Giffords is just the latest leftist trying to speak “Conservative” to us mindless yokels to sucker us into signing on to their petty fascism du jour. You remember the Soros-funded, simpering evangelist woman shilling for the immigration scam whose ad buy on conservative talk radio exceeded even LifeLock’s? They truly think if someone says “Jesus” and leaps off a cliff, we’re going to follow, lemming-like, along behind.

So now the magic words are “patriotic” and “responsibility.” But “patriotism” was déclassé to Giffords’s fellow liberals before President Obama got sworn in, and liberals embracing “responsibility?” Give me a break. Liberalism isn’t a coherent ideology; it’s a collection of lame excuses for the sloth, laziness and lifestyle chaos of Democrat voters.

There’s more. Now Giffords and her husband are super-duper believers in the Second Amendment who even have guns themselves! Convenient, since the conservative media caught Astro-Giffords himself buying one of those evil, awful assault rifles he and his wife are trying so hard to keep out of the hands of lesser Americans like you and me.

In fact, we’re apparently so dumb they don’t even need to acknowledge obvious facts. Gifford writes that, “in New Hampshire, 93% of Democrats, 79% of Republicans, 82% of gun owners and 60% of NRA households support background checks.” But of course, we already have background checks – the issue is the wisdom of mindlessly expanding them. That’s like saying 95% of Americans support generic drunk driving laws as a specific argument to drop the DUI limit to .01% (well, except for illegals).

Nor does she bother to address our actual concerns. The Toomey-Manchin bill, like every other jammed-down “bipartisan compromise,” was poorly drafted and filled with loopholes that utterly failed to secure the promises of the sponsors. It purported to prevent a national gun registry but the actual language did not – for some wacky reason, people who take the Second Amendment seriously don’t trust bureaucrats. It also acted to, at best, inconvenience and, at worst, criminalize the innocent behavior of law-abiding citizens.

No, apparently we oppose all background checks because we hate children or something. Maybe we just aren’t “patriotic” or “responsible” enough.

Now, as her “We Love Guns Except When People Like You Have Them” tour begins, look for Giffords’s new tune to not even chart. We’re just not falling for it. And when she realizes she’s getting no traction, look for more whining about how people are being mean to her by actually assessing the form and content of her arguments instead of simply surrendering to her policy preferences because some creep shot her.

Gabby Giffords has a right to pretend to change her tune on gun control. And we have a right not to listen.