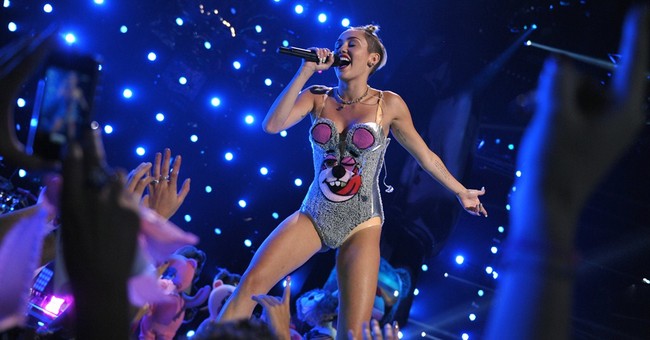 Millions of viewers tuned in to MTV’s 30th Annual Video Music Awards this past Sunday, hoping to witness a long-awaited N’SYNC reunion, among many other memorable pop-culture moments. While what they witnessed was definitely memorable, it was a disheartening reminder of what our culture expects of successful women -- sexually objectify yourself and you’ll get the attention you need to make more money.

While this is hardly new “news” to anyone, Miley Cyrus’ salacious, hyper-sexualized performance Sunday night to “We Can’t Stop” shows just how bad it’s gotten.

The 20-year-old, former Disney teen star took the stage in bear leotard, sticking out her tongue and imitating what would have to be the world’s creepiest teddy bear. The performance only sunk from this low as Miley stripped down to a nude-colored latex bikini and began “twerking,” using a foam finger as metaphorical penis to thrust, and grabbing her vagina.

Her song proudly exclaims, “It’s our bodies, we can do what we want to” – the all too familiar feminist mantra. But there was nothing feminine about her display of behavior. It wasn’t even attractive or alluring.

Is this what “true feminism” has evolved into? Was Miley’s performance an indicator of what “feminism” seeks for women?

If so, feminism has failed and has done the opposite of what it sought to do, creating an environment where women are not truly equal and have to objectify themselves in manners than even this 28-year-old was embarrassed to watch.

Early feminists, such as Susan B. Anthony and Elizabeth Cady Stanton, fought for women’s equality: the right to vote, to own property, and to have custody of their own children. The next generation of feminists built upon the work of these heroic women: seeking equal pay, higher education, and financial rights.

But as radicals hijacked feminism in the 1960s, it became about something more trival - sex.

Feminism should seek to liberate women from unjust laws and oppressive societal expectations. It should seek to counter a society’s objectification of women. But, instead, the entertainment industry is undermining that effort by forcing women to become sex objects in order to advance their careers. I didn’t see the men of N’SYNC up there thrusting, rubbing on each other, and touching themselves.

Miley is simply playing into the hand of another cultural prison for women. While women face real oppression and discrimination throughout the world, pop culture in the America is only tearing down what generations of women have fought hard to build.

As a full-time mom and full-time President of Students for Life, I have grown-up considering myself a feminist. I have 2 young children and one on the way, yet I lead one of the largest pro-life organizations in the country. Most people consider my exhausting choice to be both a full-time mom and full-time professional impossible. And guess what --- it’s hard. The belief that you can “have it all” is just that - a belief, not a reality. Something is always sacrificed, whether it’s time with my children and husband or time at work.

However, I had the opportunity to make that choice because of ladies like Susan B. Anthony, Alice Paul, and Elizabeth Cady Stanton. And I’ve never had to objectify my body to do it.

I represent a feminism that embraces all my successes and challenges as a woman. One that appreciates my role as a business woman and as a mother. One that celebrates my real accomplishments, not one that celebrates the curves of my body or how well I “twerk” on stage.

Miley’s performance on Sunday night will echo throughout our culture with far-reaching consequences. Our young women, who already look to pop culture stars as heroes, will watch her performance and begin to believe that such an approach is necessary for success. They will learn not only that they must objectify themselves and degrade their femininity in order to get ahead, but that twerking, half naked, and touching yourself in front of millions of people is what successful women do.

This is the cruel, cruel lie.