Kira Davis
|
Posted: Mar 13, 2019 6:41 PM
Share   Tweet
The opinions expressed by columnists are their own and do not necessarily represent the views of Townhall.com. 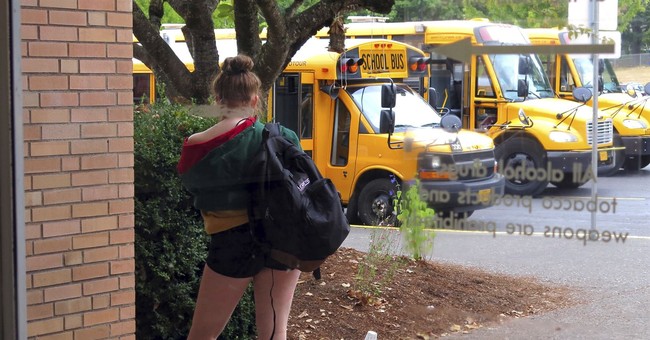 Last night I attended a school board meeting in the southern California district of Santa Ana. For those of you who don’t know, California has recently seen drastic and disturbing changes to our public school sex ed curriculum pushed by activist groups and rammed through the homogenous assembly without legitimate parent involvement or approval.

The state Department of Education and many CA school districts have made the new sex ed compliance requirements and ensuing parent review periods intentionally vague and poorly marketed. This framework was approved quite a while ago, but only now are many parents even becoming aware that it is at their doorstep when they hadn’t even had a chance to review or approve the materials.

The ACLU has begun sending out lawyers to school board information meetings on curriculum and very vocally and publicly reminding officials and parents that the time has come to move forward or their schools will face immediate legal action.

Last night’s school board meeting was heavily attended by concerned and frightened parents in the heavily Hispanic district who were confused and upset that they had not previously been informed of the details of the new curriculum they are now having shoved down their throats. California law requires curriculum framework to be provided in English and Spanish to parents for approval. No Spanish curriculum has been made available to parents in that district. It is probably no coincidence that the vast majority of immigrant based/related communities in this state are whole-heartedly opposed to LGBT-based sex-ed curriculum in their public schools.

I had caught wind that a large group of parents were determined to show up and make their numbers seen, so I rushed through my work and fought rush hour traffic to attend the 6 p.m. meeting about 20 miles north of my own district.

I quickly noticed the main board room was already packed, so I headed to the overflow room which was equally crowded. A group of parents sat at a table at the back, organizing comment forms, discussing strategy for what to address in their time at the podium, and working up signs protesting the new curriculum - “No SeXXEd!”, written in both Spanish and English.

The board delayed the meeting by 45 minutes and then it was another hour before they reached the open comments portion of the agenda - but not before the board president enacted yet another delaying tactic. She began painfully and slowly reading an information packet on other goings-on in the district, pausing between paragraphs to add her own comments and often repeating herself.

No one was deterred. When the time came each parent lined up patiently and respectfully for their turn to speak.

Some parents complained that they were purposefully being left in the dark because the school board and state education department knew that this particular community would absolutely not approve of the more graphic elements, nor the unmonitored discussion of issues related to sexuality and gender identity. As one mother put it,

“How can a state that claims to be so much for the rights of immigrants and minorities then ignore our concerns on purpose? They are hypocrites!”

Other parents voiced concerns about their parental rights being stripped away. One mother said she only learned about the school’s “LGBT Fair” after it had happened. She was shocked to learn that a local drag performer had been offering make-up application lessons to the students during the fair and did not feel it was appropriate for any school-approved activity to include make-up lessons for 11-14 year-olds regardless of LGBT issues. She had not even been given the opportunity to opt her child out of such a thing.

There were opposing voices there as well, each one angrily scolding parent as hateful and uneducated on the issues. One particularly vocal white woman even went so far as to call the nearly exclusively Hispanic parent crowd “liars” and “fear-mongers”. When we followed her and several other commenters out of the meeting we learned that at least four of the five pro-curriculum commenters did not even live in the Santa Ana district. One parent told me she watched a board member thank that woman for her comments and exchange phone numbers even as she (the parent) was at the podium delivering her remarks.

Brad Dacus, a lawyer and president of The Pacific Justice Institute was in attendance and managed to address the board briefly about their deceptive practices regarding parent involvement. Afterward he was flooded by anxious parents seeking advice. I asked Dacus what sentiment he was hearing most and he replied that most parents were feeling helpless, but also extremely curious about where to go from that point.

“They feel like the've been lied to and they just want a chance to be a part of the process.”

The comment period ended with a scolding from board members aimed at the parents who had dared to express concern.

As an outside observer I was terribly vexed by how dismissive and deceptive school authorities were to this particular group of parents. It was clear they did not believe immigrant/Hispanic parents were engaged or informed enough to be welcomed into the process.

I was in turn moved by just how much these parents did care about what was going on in their schools. I couldn’t tell you anything about the politics of the people there, who they voted for or what they think about the price of tea in China. What was most important to them was their children and their rights as members of that district.

All these people were asking for was a say, a chance to be involved, to be heard and to be active participants in the education of their children. They were asking for respect and instead received nothing but contempt and disrespect from the very people they trust to care for the development of their students.

The situation in California has become dire. The law is the law now but with so many shady, questionable tactics being employed by the state to obscure the process there is still hope that if enough parents become irate enough we could pressure the state to make changes. What we don’t need - what the SAUSD parents who spoke so passionately don’t need - is your judgment. If you think this is just another case of “whacky” California paying the price for their “whacky” voting habits, think again. This is coming to a state and a school district near you. Condescending lectures - like that of the school board last night - are not welcome. Your prayers and advocacy are appreciated. The SAUSD parents deserve our respect and applause for being willing to stand so resolutely in the face of a seemingly impossible task.