Kira Davis
|
Posted: Feb 05, 2019 12:01 AM
Share   Tweet
The opinions expressed by columnists are their own and do not necessarily represent the views of Townhall.com. 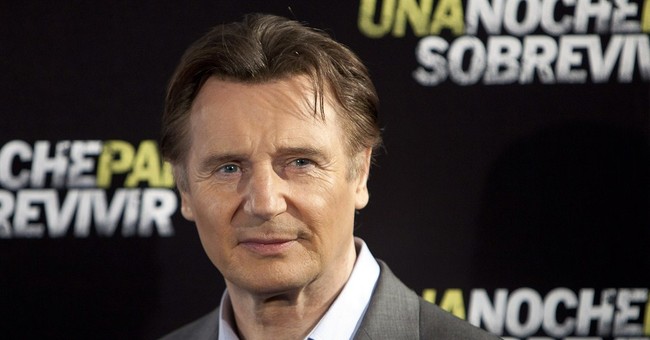 Actor Liam Neeson shocked fans when he recounted a story about his own dalliance with prejudice and racism. Neeson said that after a close female relative revealed to him that she’d been raped by a black man, he walked around for about a week just hoping to find someone to confront…and punish.

"I’m ashamed to say that – and I did it for maybe a week, hoping some [Neeson gestures air quotes with his fingers] ‘black bastard’ would come out of a pub and have a go at me about something, you know? So that I could," – he paused again – "kill him.”

He says he told the story as a type of confession to his own negative thoughts about race and expressed great shame about those feelings, which he eventually left behind.

However, many fans are upset by his shocking revelation. Some are questioning if he’s even in his right mind to publicly admit he has harbored racist sentiments.

You know that “honest conversation about race” Americans are always being told we need to have? I’ve never thought we were capable of having it. Truthfully, I think Neeson’s confession is the perfect place to start.

I once attended a community development conference in Chicago and on the second day they hosted a forum on “racial reconciliation.” The goal of the forum was to invite representatives of different races to participate on a panel and have a “brutally honest conversation” about race in America. The program flyer for the day warned that they would pull no punches and some people might feel uncomfortable about what they were hearing. Naturally I was in the front row, excited to see what this “honest conversation” might look like.

The panel was made up of a White woman, a Black man, a Chinese-American woman and a Latino man. The moderator began by asking each panel member what their biggest concern was about race in America. The white woman said she chose to acquiesce her time to the other members as she did not feel her voice as a white person was valid to the conversation (a sentiment I found extremely unhelpful). The two men gave their own standard “here’s what’s wrong with White people” answers, but the Chinese-American woman strayed from the PC script.

She told a heart-wrenching story about her immigrant father who moved into an inner-city, majority black neighborhood and opened a convenience store to support his family. He had been robbed at gunpoint not once, not twice but three times. One of those times he had been brutally beaten and left for dead. Each time his assailant was Black. She said that as a result he had begun to harbor a deep resentment towards Black people, Black men in particular. She said she would absolutely describe him as a racist and it broke her heart to say it. But then she said something that has sat on my heart from that very moment.

“At what point do we have to stop and admit that there is more to racism than just the racist? Why can’t we talk about the reasons people harbor racism in their hearts? Look at my dad. Is he wrong for judging all black people based on his own experience? Yes, and it shames me. But what about the resentment and hatred he was treated with? How did that shape his views? I want to have an honest conversation about race, but it seems to me that no one wants to really talk about the uncomfortable parts or ask the uncomfortable questions. Until we can sit and listen to the very uncomfortable things that people like my dad think, we can’t really air out our differences.”

She was absolutely right…and also booed into submission. She hardly opened her mouth to speak again after that.

I have never forgotten that short, brutal burst of honesty, and I have thought deeply about it ever since. Up until that point (and it’s probably good to note I was a true blue liberal at the time) I had only ever heard racism discussed as a “White people problem”, but I’d never actually heard any non-White person suggest that the topic is more nuanced than we care to admit. It set me on a lifelong journey to delve into uncomfortable cultural conversations.

The problem of the race conversation is that we only ever want to blame other people, but few of us are willing to start with ourselves and the unnerving possibility that we may be a part of the problem. I encounter this a lot with both liberals and conservatives on this issue. The problem lies on both sides of the aisle. Most people will begin their responses with “I hear you, but…”. That “but” is a huge problem, and having an honest conversation means being willing to give up that “but” and just start with “I hear you.”

What Neeson did was very brave. He uttered uncomfortable truths about himself and his own prejudice. We shouldn’t be shaming him for it. As Dr. Jordan Peterson says often, we can’t discuss bad ideas and how to make them right if we can’t even hear them in the first place.

The “race conversation” can’t be a conversation unless we allow ourselves to hear thoughts and ideas that are hurtful and angering.

We can’t be concerned with pointing fingers and screaming about who started it or who is worse. That ends the conversation before it can truly begin. It takes swallowing a little pride and giving up your right to be offended. It takes being willing to hear things that make you mad. It takes an extraordinary measure of honesty that begins with looking inward rather than outward.

Neeson’s confession may be abhorrent, but his willingness to show how resentment can be borne out of pain is a vital piece of this jigsaw puzzle we call healing.