Marriage: It Takes a Willage

Kira Davis
|
Posted: Dec 17, 2018 1:11 PM
Share   Tweet
The opinions expressed by columnists are their own and do not necessarily represent the views of Townhall.com. 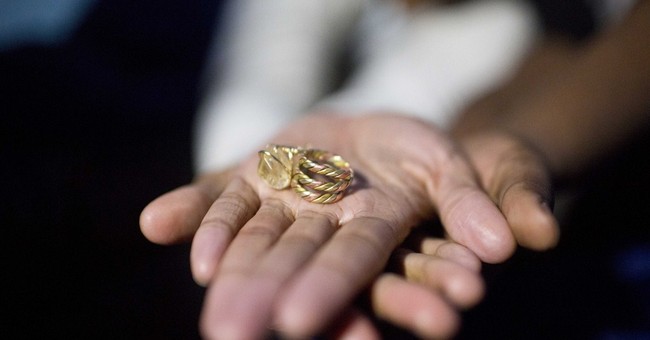 This week my husband and I celebrated 20 years of marriage.

This may sound curmudgeonly but when the subject of our anniversary first came up, I poo-pooed the idea of a big celebration. After all, what’s the difference between 20 years and 21 years? Or 19 years? We’ve been at this a long time now, with no plans to quit. It’s just a number.

But after I thought about it some more I realized that some things deserve to be celebrated, if only briefly. These days, 20 years of marriage is quite a feat. Even more so for African-Americans. The marriage rate among black couples is shockingly low - a mere 29% compared to the national average of 49% (according to the U.S. Census Bureau). Approximately two-thirds of African-American children are born into single-parent homes. It might not be a fashionable thing to say out loud these days but statistically speaking, a married mother and father is one of the top indicators that a child will grow up to be successful (insofar as anyone can really define that) and educated.

So yeah, my 20 years of marriage is worth a celebration…and maybe even a pat on the back. While my husband came from a very strong, black nuclear family my experience was almost the complete opposite. I had few role models for marriage, my own parents being divorced before I was even born. I was largely fatherless, although I did have the privilege of finally meeting and establishing a (tenuous) relationship with my father when I was 11 years old. I was raised below the poverty line and experienced a tumultuous childhood, to say the least. Having worked in community development and education for years, I know what the statistics say about the prospects of such a child growing to find a healthy marriage and family dynamic and professional success.

I have no business being where I am today with the amazing family I have. Yet, here I am. Here we are. So how did it happen? How did we make it this far when all the statistics are stacked against us?

Gwyneth Paltrow says she once asked her mother (famed actress Blythe Danner) how Danner and her late husband Bruce Paltrow managed to stay married in Hollywood for over forty years. Danner’s answer was simple - “We just never wanted to get divorced at the same time.”

As silly and simplistic as it sounds, the point she was making is a vital one. I would say it is actually the most important quality in a successful marriage. That is, if you want to stay together then make it up in your mind that you’re going to stay together. Falling in love is an accident. That’s not something you can control. That’s why we call it “falling”. Loving someone is an act of the will, and I dare say it is the purest form of love you can offer another human being. There is no greater love than the one that says, “I choose you” and marriage is the ultimate expression of that.

It takes a willage.

It takes a village, too. Although perhaps not in the way Hillary Clinton meant all those years ago. The reason we typically have parties and ceremonies that include friends and families is because those are the people who will (in theory, anyway) hold you accountable to the massive promise you make to each other. They will be your support, your judges and your cheerleaders. If you don’t have those kinds of people in your life, find them. Our marriage surely would not have lasted this long had it not been for a huge network of people over the years to offer us advice and kindness and sometimes even a harsh but necessary kick in the butt.

My husband’s parents have been invaluable to us as mentors and examples. We have a close network of friends who encourage us through the tough times, because they know we are better together than apart. When we hit rough patches we do our best not to wallow. We regularly seek professional counseling, we join church studies and activities centered around sustaining marriage, and surround ourselves with other married couples who can offer sage advice and support. Marriage is an exclusive club, consisting of just two people. Don’t take too much advice from people who have never been there.

Of course, faith is the foundation on which we have built our entire relationship and one cannot underestimate the importance of having an eternal foundation for such a mortal institution. I can’t speak to how people without faith in a higher power stay married. Perhaps some other columnist will write that. What I can say is that faith is integral because it dampens the inevitable power struggle that comes when men and women share a home. It makes us both answerable to a higher power and is a constant, grounding reminder that a promise made to an eternal creator is not one to be taken lightly. It sort of puts you in your place, so to speak.

In 20 years my husband and I have been friends, lovers and sometimes enemies of a sort. We’ve caused each other pain and we’ve been each other’s greatest supporters. We’ve had days of great passion and some of deep distaste. Just as people constantly grow and change, so does marriage. That means it takes a constant state of vigilance, always being on the lookout for challenges and influences that might knock us off our game. When they come - as they always do- we remind ourselves of the commitment we made 20 years ago. We will ourselves to push through, and what’s on the other side is always better and more amazing than we could have imagined.

We choose to keep going, and as unromantic as that sounds it’s the best and only way.

"Do not urge me to leave you or turn back from following you; for where you go, I will go, and where you lodge, I will lodge. Your people shall be my people, and your God, my God.” Ruth 1:16