The Only Candidate Ohioans Dislike More Than Trump Is John Kasich

Kimberly Fletcher
|
Posted: Mar 14, 2016 11:57 AM
Share   Tweet
The opinions expressed by columnists are their own and do not necessarily represent the views of Townhall.com. 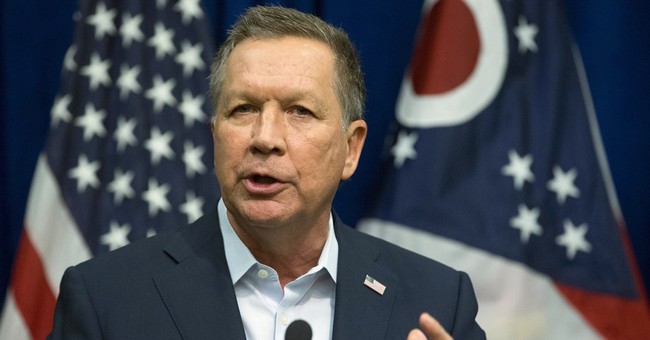 Why won’t Ohioans vote for their own governor for president? That is a questions I’ve been asked a lot lately. The short answer is he is no conservative. When you have a liberal media personality saying Kasich would make a great running mate for Hillary Clinton, well, that kind of says it all.

I was just one of the thousands of Ohioans across the state who volunteered countless hours to help get John Kasich elected governor. His passionate speeches about repealing the death tax, phasing out personal income tax, protecting gun rights, and standing against Obamacare had a lot of Ohioans excited. For the first two years, we weren’t let down, but after Obama won reelection in 2012 things changed dramatically. Kasich went from being loudly outspoken against Obamacare in Ohio to embracing it. He went from promoting school choice to pushing Common Core on Ohio Schools. What’s more, he is opposed to requiring photo IDs to vote in a state that is overrun with voter fraud.

Chris Littleton, a conservative leader in Ohio, did an excellent piece outlining Kasich’s record and why Ohio conservatives won’t vote for him.

Ann Becker, president of the Cincinnati Tea Party, said she supported John Kasich in his first run for Governor. However, says Becker, “that John Kasich, the man who ran for Governor, is not the man we have in Ohio today.” Becker says she no longer supports Kasich because he supports Common Core and Obamacare and does not support Right to Work. During Kasich’s reelection campaign Becker was refused admittance at a rally for wearing an “Ohioans against Common Core” t-shirt, and later wrote an op-ed about the incident.

Tom Zawistowski, Executive Director of the Portage County TEA Party, says Kasich has been an unbelievable disappointment to Ohio conservatives. “No one has earned the moniker RINO more than John Kasich,” laments Zawistowski.

“Two years ago,” says Becker, “in one of the most despicable acts of politics I have ever seen, John Kasich went around our elected representatives in the Ohio General Assembly to install Obamacare in Ohio through an unelected body known as the Medicaid Controlling board.”

This was after 61% of Ohioans rejected Obamacare in 2011.

Zawistowski says Kasich doesn’t even act Republican let alone conservative, which is why Chris Mathews from MSNBC said that he "really likes this guy" suggesting he would make a great running mate for Hillary Clinton.

“I’m not sure how he fits into your party any more, “Matthews said. “I wonder if your party has room for a moderate like Kasich any more. I look at all of the excitement for Cruz and Trump, and people far to the right of John Kasich seem to be getting all the noise, making all the noise.”

Maybe that’s because what Americans want is what “the noise” is offering and Kasich is just pushing more of what we don’t want.

The Ohio Right to Life recently gave a glowing endorsement of Kasich stating, “There is no candidate running for president who has done more for the pro-life movement than John Kasich." However, last fall, following the release of the Planned Parenthood abortion videos, Governor Kasich ignored a huge grassroots effort by over 100 Ohio groups demanding the end of state tax-payer funds for abortions.

I should also note that endorsement comes from an organization that has become known as the “Ohio Right to Regulate,” and spent more time arguing against Ohio’s Heartbeat Bill than Planned Parenthood did.

What really concerns me is Kasich’s strong ties to the establishment of both parties and his “finger to the wind” attitude. What happens when Chris Matthews and Kasich’s establishment supporters find out he’s pro-life? Will he still be prolife?

In spite of all this, there are still several Democratic and Republican voters who are planning to go to the polls to vote for Kasich for the sole purpose of stopping Trump. It is clear the establishment is at work here. Last year, the Republicans in the House rushed through a bill that moved the Ohio primary back a week so Ohio could become a “winner take all” state. That, combined with Ohio’s open primary, makes it very beneficial for Kasich who is spending a lot of time convincing Democrats to vote for him instead of Trump.

Many, including the Columbus Dispatched reported the move to “winner takes all” was done to give Governor Kasich an advantage in the presidential election. Unfortunately it has created an enormous amount of confusion on the GOP Winner Takes All ballot.

Ironically, Kasich is in the fight of his life in his own state because people are sick and tired of these very kind of shenanigans Governor Kasich and the GOP engage in. But Democrats are just as fed up which is why Trump is polling so high among Democrat voters. Independents, interestingly, seem to be decidedly Trump as they see it as a vote against both parties.

Conservatives are torn. Those who want to stop Trump think voting Kasich is the answer as it will pull delegates from Trump. But that is the establishment talking. Remember, they are the ones who want to stop Trump and the only candidate they despise more than Trump is Cruz. The voters who want Cruz are afraid to vote for him because they think it will give Kasich all of Ohio’s delegates. They fear that more than Trump. Unfortunately we may get both.

The GOP establishment wants Kasich. The only way they can even attempt to stomach Trump is to have Kasich as VP. Barring a complete rejection of Republican voters across the nation at the GOP convention, Kasich will never get the nomination. But I don’t doubt for a minute Trump could cuddle up to Kasich for VP if he thought it would win him Ohio. A vote for Kasich is either a vote for the establishment, or a vote for Trump—or worse—both.

The establishment sure seems to have this one all wrapped up.