“The Monuments Men” Not So Monumental (But Fun) 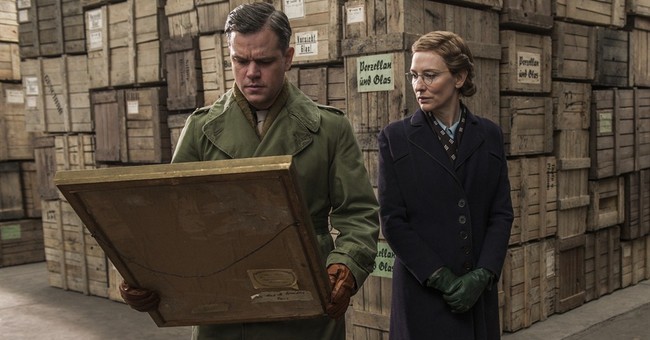 In the pantheon of World War II films of the non-bloodbath kind, there are some standards like “Kelly’s Heroes” (1970), “The Dirty Dozen” (1967) and “Where Eagles Dare” (1968). Two of those flicks star the squinty, gravelly-voiced Clint Eastwood and the other one stars former Marine Drill Instructor Lee Marvin and a great cast of “kick-ass and take names” types. The pantheon film closest to George Clooney’s “The Monuments Men” (opening today) is “Kelly’s Heroes” and unfortunately Mr. Clooney’s latest directorial effort fails in comparison. Each film offers reluctant heroes taking on Nazis as the Kelly’s Crew tries to capture a bank vault full of gold while the Monument’s Crew tries to save Western Civilization’s greatest artworks. After seeing one crew is stealing gold and the other crew is saving art… guess which Crew has more fun and makes for a better film.

It hurts to watch “The Monuments Men” in some ways as it earnestly tries to tell a great story and as remind us how important this same story actually is. The central problem in this film is Mr. Clooney’s bookend “speechifying” about the glory of art and why saving it from destruction is so darn important. Clooney’s character reminds us frequently that without art, people won’t know anything about the foundings of Western Civilization or how to explain it to their grandkids. To say that this is insulting to the audience is an understatement. If one mentions Leonardo Da Vinci, Pablo Picasso or Michelangelo to a country bumpkin, the country bumpkin will know that those are important names and that they mean something. Unfortunately, “The Monuments Men” screenwriters (Grant Heslov, Clooney) forget that their audience is smart enough to realize that this film is more than a simple shoot’em up or an explosion-fest. That is a shame.

However… the rest of “The Monuments Men” is a fun, if slow-paced romp wrapped inside a smart history lesson. Who knew that art historians could be so cool (and funny)? Seeing Bill Murray paired with Bob Balaban and John Goodman with Jean Dujardin is a treat and along with British actor Hugh Bonneville, Matt Damon and Clooney – they are worth the price of admission. Based on a true story, this a cast of guys that Uncle Sam didn’t want at the beginning of the War but desperately needed for after the War. And for that, we are rewarded. Seeing this Special Seven (Murray, Clooney, Damon, Goodman, Balaban, Dujardin, Bonneville) together in the beginning is fun and has that nice click of “how will this all work with these guys together”? Mr. Clooney connects the dots quickly, but it would have been nice to have a little more time to add some gravitas to some of the men and why each was “the guy” for the Monuments Men mission. Then again, would it have mattered in the end?

Following the Monuments Men’s adventures across the European Theatre as they chase Hitler’s Army to find Europe’s masterpieces is interesting, exciting at times and serves as a reminder of the world many of us inherited after World War II. “The Monuments Men” matching wits and guts with their German and Russian nemeses pay off handsomely. Cate Blanchett’s casting as art researcher Claire Simone does not. While Ms. Blanchett’s performance is good as expected, her character as written comes across as untrue and confusing at times. For example, in the film she plays a Parisian collaborator to the Nazis but when she is captured and sent to a jail for collaborators – her head isn’t shaved as was customary for female collaborators. A small fact, but an important historical one in a film that is meticulous about the fine details of art. Then there is the conflict over her seeming unwillingness to help “The Monuments Men” find the art, after the Nazis she despised already steal it.

The film is based on Robert M. Edsel and Bret Witter’s book, The Monuments Men and a number of scenes are fictional, but these do help flesh out the story. “The Monuments Men” is worth seeing in a theatre if only for its cast and beautiful locations. If audiences can look past some cringe-worthy and stiff dialogue at times, they will get something fun and informative from it. The race against the Soviet Army to find the last bits of art in the war’s closing days is terrific and makes “The Monuments Men” leave you with a smile. Note: there are some battle and death scenes, adult language and sexually-suggestive language.