That Time We Lost Our First Amendment Right to Free Speech

Kevin McCullough
|
Posted: Jun 03, 2018 12:01 AM
Share   Tweet
The opinions expressed by columnists are their own and do not necessarily represent the views of Townhall.com. 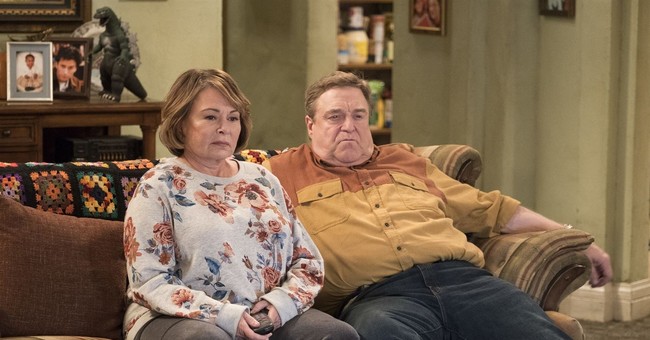 It’s final breaths died this week, and unless those who care strongly enough about it decide to get active, it will not revive.

It’s been dying a slow death for a long time, but this week may be the nail in the coffin.

Now the enigma of free speech still exists. The left will lie and claim they support it. But speech and the freedom to speak one’s mind is now more closely sheriffed, controlled, monitored, and leveraged than ever before in our history.

There are rules that govern the new speech and they are unyielding. If they are broken the consequence is unforgivable. If they are ignored payback is immediate and scorched earth is all that’s left.

This week we had exhibited before our very eyes the “new look” of what “allowable speech” vs “free speech” looks like.

When Roseanne Barr made the utterly contemptible comparison of Valerie Jarrett to the film characters in the “Planet of the Apes” the ink was barely dry on her tweet before she not only experienced the level of blowback that made her want to crawl in a hole, but her life, and that of the several hundred who worked on her number one hit comedy at ABC Network had been eliminated from planet earth.

Many conservatives—I being certainly counted among them—said that the statement deserved the strongest reaction possible. My basis for doing so was the utterly immoral worldview I felt the statement held in labeling any ethnicity as something less than human. And while I agree with President Trump’s assessment that your actions can cause you to be classified as someone who behaves less than human—as in MS13—to my knowledge Valerie Jarrett had never chopped up female bodies of victims that had been raped and murdered on Long Island.

In this information era, the next steps following Roseanne’s tweet were predictable. Blatant hypocrisy of leftists was exposed far and wide. It literally took minutes to see tweets remarking on Keith Olbermann’s foul tempered and tongued twitter habit. Dozens of other left leaning and leftist personalities were exposed, and the debate raged in this day of whataboutism.

This is where the story would’ve died and the hypocrisy would’ve merely been noted by commentators.

But within literally 24 hours Samantha Bee compared the motherhood of first daughter Ivanka Trump to an utterly indescribable profanity that insulted both motherhood, and women everywhere. The pro-abortion Samantha Bee used an insult of the female birth canal to condemn Ivanka, then in even greater moral failure implied that Ivanka use incestuous lust to create sexual satisfaction for her father in order to influence his views on immigration.

The video clip only went viral because those in the center right twittersphere captured and re-posted it. None of the news outlets that made Roseanne’s comments their top story on their front digital pages even carried the Samantha Bee comments for nearly a full day following the center-right interwebs speaking out.

Barr’s comments - disgusting and vile, dehumanizing and racist, evil and condemned - passed through the filter and the proactive thoughts of one person; herself.

Bee’s comments were suggested, written by writers, reviewed in production meetings, practiced in rehearsal, approved by producers, directed in broadcast and accepted by her network.

Literally dozens of people contributed to the vile vomit that ruminated in Bee’s head, but also helped it become acceptable discussion in the media marketplace.

This double standard aside however, it got stranger as Bee was honored the following evening. The honor was for “advancing social change.” The television academy was proud of their decision. To go through with it—instead of allowing a mostly sympathetic press to report on the evening—they banned them.

Even so, the networks hardly expressed concern...

Following the “honoring” of Bee’s show hundreds of media, Hollywood, and other celebrities came to Bee’s aid. Minnie Driver an ABC Network (Barr’s recent employer) actress even went so far as to expound upon the most vile elements of Bee’s original tweet—and if possible—made them worse. The media yawned, and ignored it.

Barr has a history of making likely racist statements, but that history did not prevent ABC from relaunching a show they dreamed of cashing in on due to the millions of viewers it was bringing back to their sad prime-time lineup.

Bee had to be dragged to an apology. She subsequently took it all back in vile defiance at the closed Television Academy honors event.

It will be a very long time before Barr is gainfully employed by anyone in prime time television production.

Bee will report to work on Monday, more profane and more incentivized to remain so than she has ever been.

The reason I lay out all of the above is that not only has it been a colorful example of which side still has “free speech,” it is also a stark warning. The American left is out to squelch the speech rights of any and all Americans who merely disagree with them.

On the gun rights debate, networks will clear the airwaves for David Hogg and the “fab five” to spout nonsense endlessly for weeks. But equal victims in the violence of the Parkland shooting who hold “non-approved” opinions have been systematically eliminated from the same level of discussion.

On the matter of abortion, networks will hardly ever mention the annually largest event opposing abortion in Washington DC with upwards of a quarter of a million people attending for dozens of years on end. But the same networks will go wall to wall with coverage of a Senator introducing legislation “that will harm women” by defunding so called Planned Parenthood.

On matters of family, networks will insist upon every alternative lifestyle being not just reported on but celebrated—from news coverage to favorable characters portrayed on dramatic and entertainment programming. They will ignore science, faith, and families who have seen elements of those lifestyles that have not been celebratory but actually tragic in their outcome.

On matters of religious freedom, networks will label the faithful as “bigots” because their faith practices warn against the dangers of inappropriate sexual behavior. They will also mock any need these faiths may have to seek legal protection to simply believe, and teach (read that — speak) what they honestly hold as canon.

On matters of national security, networks have taken the side of jihadists, the Muslim Brotherhood, Linda Sarsour, CAIR, and various activist groups, while giving very slanted coverage of those who even came from radical islamic backgrounds and who try to warn today’s masses of their dangers.

On matters of politics, progressives dominate higher education, hollywood production halls, and up until Trump the reigns of government in a way that they were able to punish people who disagreed with them, all the while forgiving sins in their camps from the likes of Harvey Weinstein, Anthony Weiner, & Mario Batali.

When I agreed that Barr’s offense deserved the strongest response possible, I carefully explained that if what that demanded was a Kathy Griffin-like career ending reaction then so be it. I backed the reaction to the abhorrent “beheading” picture of our President.

What I was not indicating however was what the left did.

I didn’t think Roseanne Barr should lose her job for her tweet. If she lost her job it should have been due to a moral core of viewers who decided to change the channel because of her offense. Obviously if she apologizes and demonstrates change then her viewers can evaluate all of that and allow the free market to do what it does best, make those decisions.

Melissa Francis of Fox News agreed with me on this point and was grossly misunderstood on Twitter this week when she said that Bee shouldn’t be fired for her remarks. Appearing on "Outnumbered" she simply surmised that regular viewers of Bee’s show know what they’re getting when they tune in. She implied, though she did not expressly say it, that if the viewers of American television are offended they should “change the channel.”

This would make the most logical response to almost every public offense. Allow the sensibility of Americans to be the final arbiter of such decisions.

Yet the American left feels the need to pre-meditate the decision making process, pre-mediate the responses, predict (usually wrongfully) public opinion, and prefer only those who agree with them to proceed.

It is in this attempt at outright control, that they have killed free speech.

It is the fact that they have been unable to take that control from the office of the President that yet keeps them up at night.

It is what true Americans who love our first amendment must obliterate at the ballot box.

I only hope… it is not too late.