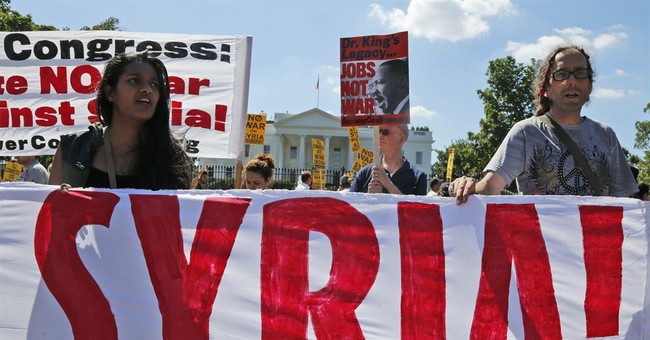 The nation will soon know whether or not President Obama will authorize a strike on Syrian military forces. What he will tell us on Tuesday evening, few can factually predict. But if the outcome of his deliberative process does not pose his favored verdict, no one would be surprised if he just did as he originally wished to begin with.

But even that is truly a mystery. After all, chemical weapons attacks have been occurring in Syria since March, and it’s only now that we must make some sort of demonstrable stand so that future rogues don't think we're sissies or something.

But President Obama's team has always been sissies. They have been since the days of Joe Kennedy, President Wilson, and World War I. Their sissiness was present when John Kerry begged for his purple hearts and ticket home from Vietnam, and reinforced when he lied to Congressional committees about American forces and the crimes he accused them of.

Then Presidential candidate John Kerry showed special sissiness when he was attempting to claim he was against the war in Iraq that he called for, warned of consequences of not initiating, and then voted to authorize. His overly limp salute when he "reported for duty" at his Presidential nominating convention also had sissy written all over it.

That same progressive is now Secretary of State and attempted to win his losing argument by claiming that if we don't bomb the Syrian military (the enemy of Al Qaeda) that we will embolden Al Qaeda and their ranks will grow.

I know... I'm trying to figure that one out for myself.

How exactly does becoming Al Qaeda's air-force deter them from victory in Syria, and hence another victory whereby they chant things like "death to America" in madrasas while grooming another generation of suicide bombing, Allah worshiping, haters of all things western.

Then there are the progressive sissies in Hollywood. Though they are major funding sources for all things of the progressive movement, you could not find bigger bunch of bloviating loudmouths when President Bush was in office. They complained that as President he dragged us into war.

They did so even though President Bush had Congressional authorization, multiple United Nations resolutions, and coalitions of nations that ranged from dozens of nations in Iraq to more than a hundred in Afghanistan. President Bush's Secretary of State--Colin Powell--went to the United Nations and presented evidence that had been corroborated by more than a dozen nations, as to the specificity of the types of chemical weapons Saddam Hussein not only possessed but would later export from his nation to neighboring Syria. President Bush also had the matter of Al Qaeda beginning to find and use Iraq as a regional base of operations that was directly related to the larger issue of stopping them globally.

In President Obama's case for taking military action he has been ignored by the United Nations' Security council, has yet to secure Congressional authorization, and his idea of building a coalition is the overwhelming military powerhouses of France and Albania. (Scratch that France just surrendered.) But perhaps the truly surreal element of his proposal to bomb Syrian military forces is that we would do so to the benefit of the same Al Qaeda that we have been trying to kill in Afghanistan, Iraq, Pakistan, and Yemen.

Now having established these minute differences between the established purposes of the proposed military action, one would think Hollywood would be rioting over President Obama's assertions, demands, and already-under-way plans. I mean if Hollywood really felt the "outrageous unjustness" of President Bush's criteria for military action, they must be nigh insane on the basis of Obama's demand.

So when asked about it this week, Hollywood Icon Ed Asner offered this gem:

"Another reason some Hollywood progressives have been reticent to speak out against war in Syria, according to Asner, is fear of being called racist. 'A lot of people don’t want to feel anti-black by being opposed to Obama,' he said."

So progressives would stand by and allow supposed injustices be perpetrated in the name of not "appearing to oppose" a man, because some other people may accuse them of opposing that man based on the color of their skin--and not the policy he was advancing?

So it’s better to wholesale be flaming hypocrites, than to take a principled stand for something based on the moral rightness of your position?

This is the case, the profile, the definition, the depth, the significance, the nature, the character, and the contribution of progressives to the culture.