Why the polls say Obama is worse than Bush 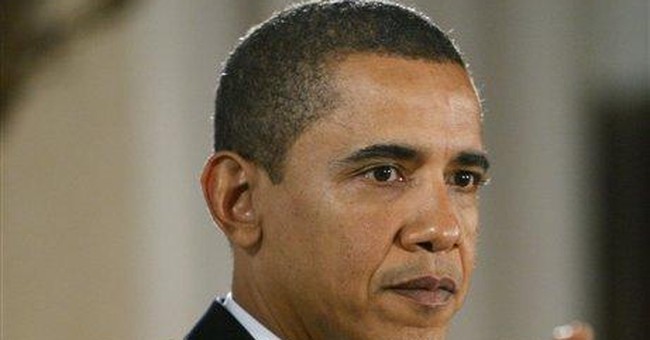 There is much more to the fact that President Obama now polls lower than President Bush did at fifty days into his presidency than merely what bi-partisan pollsters Schoen and Rasmussen were able to point out this week. In nearly every category of performance, President Obama has adeptly demonstrated that he is in over his head, and sinking fast. "We the people" sense his inability to make sound decisions and thusly, the President has wiped out nearly all of the Republican support he enjoyed not long ago, and Independents are not far behind.

When you consider the sector of the Democratic base that thinks raising taxes on everyday working people is bad, you even begin to see a schism in his base not previously thought to be possible.

Seriously, in nearly every category of governance he has messed up royally, and is clueless, or wantonly stubborn to do the things that will fix any of the problems. At the end of the day something will change. President Obama will formulate new policies, or "We The People" will use a shepherd's staff rather easily in 2012.

In my syndicated column and on my blog, I have been tracking the number of campaign promises that he has broken. Yet many of these don't even rise to half the level of importance on the issues that "We The People" are growing increasingly concerned about.

On the economy, the unemployment numbers have skyrocketed in the opposite direction, escalating especially hard following the signing of his stimulus plan. The plan, according to leading ecconomists, that only dedicated roughly 3% of the total amount towards actual job creation. On this point Warren Buffet, one of President Obama's strong supporters in the campaign, expressed grave reservation.

One of the great lies that President Obama continues to try to perpetuate is to say that "going green" would jump start economic growth. At the same time, he restated in his address to Congress what he had said on the campaign trail: that no family earning less than $250,000 would see an increase in taxes. Yet every family in America is going to pay additional tax under his cap and trade program. By essentially punishing "evil big business" for carbon footprints, the feds claim they will tax said "evil" businesses to show them who's boss. Oddly enough, those "evil" businesses will never feel the sting because they will pass the cost of the imposed taxes on to the consumer in the form of higher prices for simple things like electricty, natural gas, and whatever forms of energy they may use.

On foreign relations he spoke loud and long about removing embarrassment from the reputation of the United States to our allies. He prompty begins his administration by giving the very first sit down interviews to networks run by our enemies. He then thrice insults Great Britain, our closest ally of all. He is left with major distance between his wishes and those of Israel, our closest ally in the mid-east. And topping it off, this past week his administration dealt with Brazil, our closest ally in South America, with the same kind of "White House gift shop" hospitality he had just kicked Great Britain in the knees with.

On national security Chavez has taunted him, North Korea has threatened him, Iran has burned him in effigy, and Russia, Cuba, and Venezuela are plotting ways to put Russian long range bombers in our hemisphere and directly off our coast.

On terrorism Iran, Al Qaeda, and bin Ladin are openly laughing at him. Maybe his giving Hamas -- a terror group, on the international terror watch list -- 90 million dollars, wasn't quite the bold stroke of genius his cabinet told him it would be.

Most importantly by a margin of 12% the American people believe the stimulus will only help and unfairly benefit those who have already been irresponsible.

Every single one of the actions described and taken in this piece are actions connected directly to Obama. Remember, a clear majority of Americans thought any form of stimulus help should have come primarily through reducing the tax burden, not saddling it up for rides into the sunset.

We've heard the word "crisis" roll off the lips of the administration like syrup in recent days.

But now, President Obama has one of his own. His policies are failing in every direction. "We The People" are worried.

So for a man who campaigned on change, why not start practicing what you preach Mr. President?