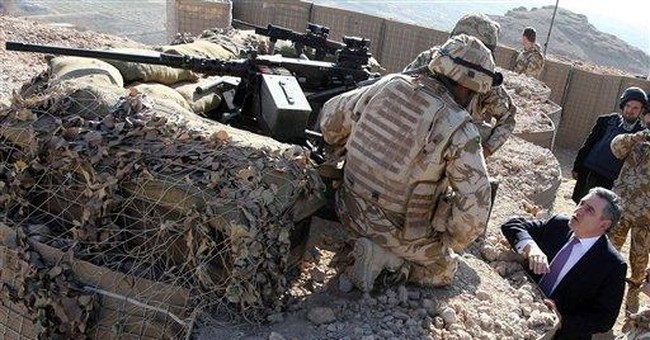 Don't let it be misunderstood. Those who serve in our nation's military espouse values that confuse the left, confound their purpose, and leave them unable to understand, much less resonate with our service men and women. This week I saw why.

Five nights ago I sat at dinner with a United States Marine and an about-to-be winged United States Naval Flight Officer. They have been friends since childhood. The marine served in the South Pacific, Gitmo, and Iraq. The Navy NFO has been learning aircraft, trajectory, and the specific abilities of how to conduct a dog-fight, drop a bomb on a terrorist, and make it back to the carrier safely with a $44 million dollar piece of equipment. The occasion we were all together for on this particular evening was to celebrate the completion of the training for the NFO to take his next step into his days of flying missions into Iraq, Afghanistan, or wherever else the U.S. Navy decides he should.

Between his winging and his access to an F-18, however, rests a little appointment on the calendar. Those in military service know it as S.E.R.E.

It stands for Survive, Evade, Resist, and Escape.

Few in civilian life know much about it because of the intense nature of what it is. Stories have surfaced as to what others experienced in undergoing it, but even these are few as those who do persevere it are expected to not release the details of what happens.

The description as best I could decipher is akin to being caught behind enemy lines. Your objective is to survive for periods without the basics. You are to do so for as long as possible by not being captured (hence the "evade" phase.) When captured you are to react as though those who hold you are in fact the enemy, and as they do things like waterboard you, break fingers, etc., you are to rely upon all your ability as an honorable member of the defense forces of the United States to resist, not give up your information, nor of your mission. The more you resist the more those who run the program are encouraged to hurt you to tempt you to break. The only major caveat they are asked to observe is not to break any major bones.

At some point in the two weeks you are given a chance to plot an escape, attempt that escape, and you likely will be caught and punished for doing it.

The entire point of the exercise is to wear you down, to wear you out, and to test your ability to survive under literally the worst possible circumstances.

The NFO's commanding officer made mention to him the next day following his winging ceremony that when he went through S.E.R.E. it the easiest portion of the time for him was waking up in frozen conditions and attempting to break ice with a knife to get himself some usable hydration.

My friend the NFO has known for some time that this period of his training was coming. I had hoped with great earnestness for his part that it would have already happened prior to his winging and that our time together would be one of great celebration of his accomplishment. It still was, but as the marine and navy officer conversed there was a sense that this excruciating portion of his training was drawing near, and there was a sobriety about it all that struck fear in the rest of the observers.

The Naval Flight Officer has to experience S.E.R.E. in order to be fully ready to face the possibility that he will be downed behind enemy lines, that he will be required to undergo this entire routine (complete with torture) again in the future. As an NFO it is something that is required for him to experience.

For the marine that was with us, who had enlisted out of high school and already served tours with distinction, he too had heard stories of the difficulties of the S.E.R.E. program. He too sensed the impending pain, stress, and anxiety that his life long friend was about to undergo. But for the position he held in the Marine Corp. he had never been assigned to go through S.E.R.E. Though he did attempt to soften the blow by mentioning the possibility of groups not getting captured. (One of these urban legends involved Navy Seals that worked together so well they were able to out fox the SERE coordinators and take over the base.)

But here's where the lump in my through nearly suffocated me.

The marine relayed (mostly to his friend) but to those of us hunched around the tiny table that he had once requested assignment to S.E.R.E.

"I asked if I could go," he said quietly.

"I knew they would probably say no. But here I was getting ready to ship to Iraq and I couldn't help but think, 'If they'd just let me go through it, at least I could know what to do and help my unit survive if we needed to as a group.' The idea being sort of that I would go through it for the rest of them."

The conversation moved to other things.

I was struck by the marine's simple, no-nonsense demeanor in relaying the fact that he had asked his government to torture him for the well being of the unit he would have responsibility for in what was at that time the most dangerous theater we were engaged in. He wanted to be hurt, so that he could gain the knowledge of how to save the lives of some of the men he had not yet been introduced to.

That has haunted me every night since.

On my return trip to New York because of the harsh weather I was forced to lay-over in Atlanta for a night. The next day I noticed an entire unit of soldiers hoping to get stand-by seats on the plane the airline had summoned to come get all of us who had missed our flights the day before. One of the officers in charge of these men was seated across from me in the terminal.

After a few minutes I crossed the aisle, shook his hand and asked, "You coming or going Sir?"

"We've been traveling en route for about 18 hours, trying to get home to New Jersey for Christmas," he answered quietly. "We return to Iraq on January 5th."

I thanked him for his service, his leadership of the fifty men and women in front of us, and the pride with which Americans who love our nation look upon them.

That is something the left does not share. They scorn their existence, mock their mission, belittle their purpose, dedication, and commitment. From John Kerry's implication that only stupid people go into the military, to members of the Congressional black caucus accusing the military of racism, to the Godless leftists and progressives who want even the mention of God removed from the winging ceremonies. Even the new President Elect recognizes that liberals can not be put in charge of our military for the sake of the country's good!

As our plane touched down at Liberty International airport in Newark three hours later, these heroes in their camis, who previously had been fairly quiet broke into cheers. Their childlike exuberance reminded the rest of us how much they truly love the nation we share.

And as my thoughts returned to my friends the marine and the NFO, I was reminded that sometimes they love it enough to suffer, even endure voluntary torture for it. I stand more grateful, more humble, more indebted, and more supportive of those who serve us all.

I only wish everyone, especially those from the left who label these men baby-killers, rapists, and murderers, knew the truth behind America's finest, bravest, and most self-sacrificial.

God Bless you soldier, sailor, and airman... wherever you spend this Christmas!

You are not forgotten.